Zac Taylor: "This is what we envisioned entirely." 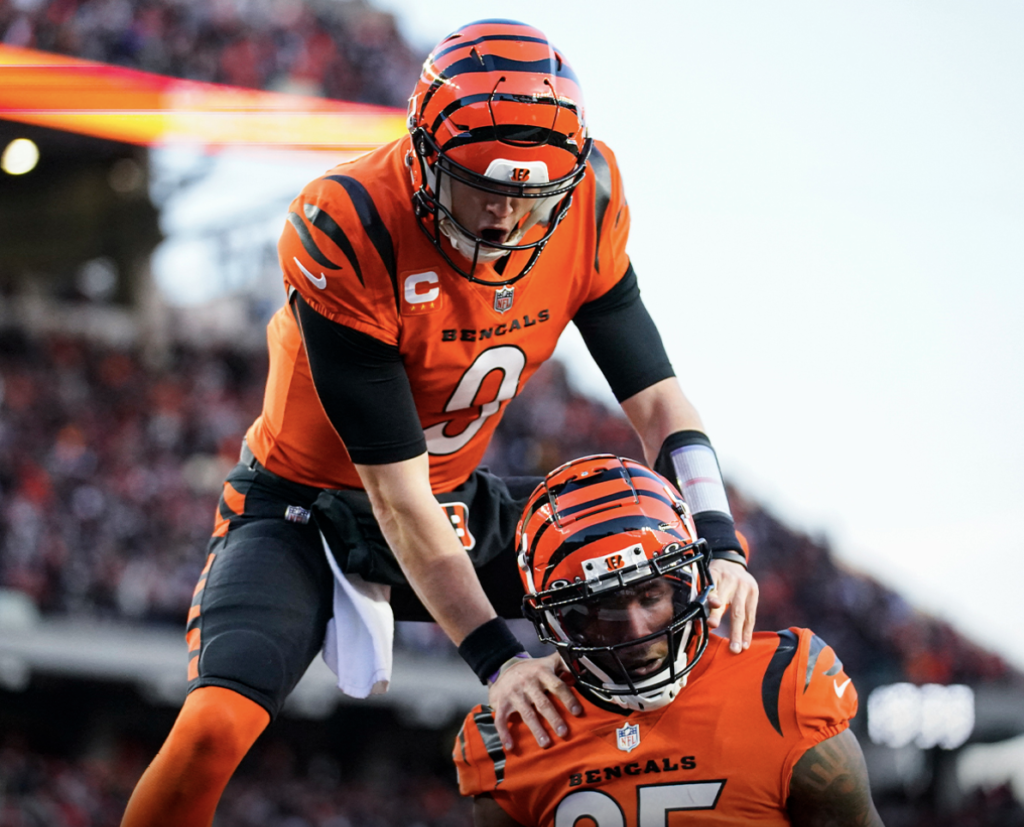 And not only did the Bengals win the game, they put themselves back in the upper echelon of teams that are now favored to win the Super Bowl.

Thanks to another 27-24 thriller over Patrick Mahomes and the Chiefs before a supercharged sellout of 66,243, the 8-4 Bengals have put themselves in the conversation with the Eagles, Vikings, Chiefs and Bills as legitimate Super Bowl contenders.

But to discuss something that is two months and a ton of variables away is to miss the point of what Sunday was all about.

It was about the Bengals continuing to show they can do what great teams do, find a way to win in spite of themselves against the best competition.

“This team is so confident right now,” Zac Taylor said. “This is what we visualized entirely. I know a lot is made because they’re a tremendous football team. We are a tremendous football team as well. This team is playing as well as I hoped we’d be playing right here in early December. Like I told our guys, we didn’t win a division championship today. We didn’t win our conference. We just won a game in early December.”

Yes, this was just one game. One game in early December that didn’t clinch anything. But looking at why they won this game is really the essence and reason the Bengals are right to have so much confidence heading into the final five games.

“They gotta play us” took on new meaning Sunday.

The Bengals looked like your typical fast-starting team that teams like the Chiefs have faced countless times before in the past four year of the Patrick Mahomes era. They hang on long enough, even down 14-3, for Mahomes to get warmed up.

And unlike the two games in January, it was the Bengals who got out to the early lead. But the Chiefs made their predictable run and when the Bengals failed on third-and-1 and fourth-and-inches at the Chiefs 4 before halftime, there was this dread that the Bengals were going to pay dearly for that lack of execution.

When Tyler Boyd dropped a sure touchdown pass on third down in the third quarter, settling for an Evan McPherson field goal that tied the game, 17-17, there was an even bigger sense of doom.

Jonah Williams was called for being illegally downfield taking away a chance at a fourth-and-inches shot down, 24-17.

This wasn’t any ordinary team that wastes opportunities to put teams away. These are the Chiefs and Mahomes.

Sure enough, the Chiefs got the ball back, went down and scored a touchdown for a 24-17 lead and the game had that feel. The Bengals weren’t going to need one play. They were going to need several in the fourth quarter with no margin of error.

Play 1: Trailing 24-20, Germaine Pratt strips the best tight end in football and one of the best in the modern era and forces a fumble at midfield. Bengals go down and score the go-ahead touchdown for a 27-24 lead.

“We knew that we needed to make a turnover,” Pratt said. “We were in Cover-3, Kelce sat down in a little weak spot of the defense. I just had an opportunity to go for the ball.

“Anytime you go against a great team like Kansas City, you want to impose your will on those guys — show them how much of a physical team we are, and how well-connected we are, and try to get a win.”

Pure athleticism from Joseph Ossai in chasing down Patrick Mahomes. Bengals drafted him for tenacity on plays like this. "Spy" runner never gave up. pic.twitter.com/0prGwwzNZI

Play 3: On third-and-11 at the Kansas City 28, with the Chiefs out of timeouts, Joe Burrow calls for a pass – not a run – and fires a seed to Tee Higgins for 11 yards and a game-clinching first down.

On 3rd & 11, #Bengals QB Joe Burrow delivers a dart to WR Tee Higgins, who picks up 14 yards & the first down. That's the ball game. #ChiefsKingdom pic.twitter.com/MLIXJE6pxI

Those three plays, not the multitude of mistakes that came before, defined the Bengals on this Sunday.

The Bengals have great players who don’t blink in critical situations.

“We have players that have been in these spots before,” Burrow told me. “Whether it’s college or last year, we’ve accumulated players that it matters to them. The character of these guys is what wins games down the stretch in December and January. They’ve done a great job of finding those guys; we have one of the best locker rooms I’ve been around. You feel the energy in the room every single day. We have the utmost faith in one another. If one unit isn’t playing great, the other one will step up and make plays.”

Then there’s this exchange Ja’Marr Chase relayed after the game after Chase went out of bounds on the first play after the Butker field goal miss.

“It’s funny because Tee went off on me today. Tee never went off on me (before). So, when Tee went off on me, I was a little struck. I was supposed to stay and fall in bounds on the two-minute drill. Tee looked at me and started going off, I didn’t expect him to do that. So that means he’s caring, and he wants me to do the right thing. I need somebody to be on me like that, so … good teammate.”

Want to know what makes great teams? Great players that push each other. The football cliché that the Baltimore Ravens have used for years is true in Cincinnati – Iron Sharpens Iron.

“We still have a long ways to go. We’ve got Cleveland coming in our house next week and we want to keep the momentum rolling. So, I think we got the right mindset right now to handle this victory and be ready to move on next week to Cleveland.”

Enjoy what you witnessed on Sunday and hope that we get to see plenty more in the coming weeks and months.