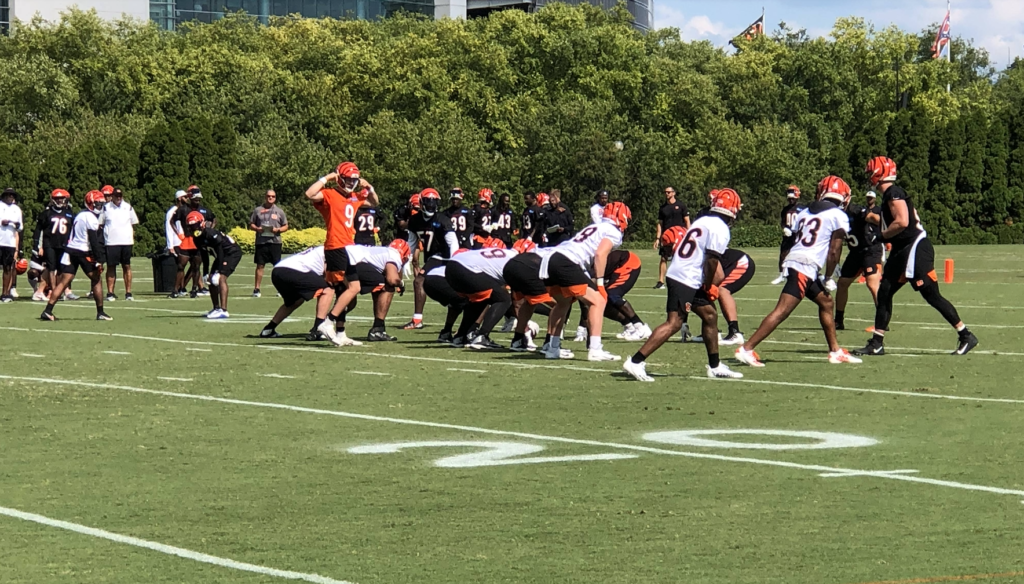 CINCINNATI — The first two weeks of watching Joe Burrow perform in training camp has been inconsistent, to say the least.

At times, it’s been downright ugly.

But the Bengals quarterback is healthy now and he said Saturday that he’s essentially writing off the first two weeks of overthrows and throwing behind receivers to a lack of comfort in the pocket. The mental reps just haven’t been clean in the pocket in 11-on-11 snaps against the defense.

Burrow had a conversation with himself Friday night about what’s going on and how to keep himself in the right mental frame of mind.

“I thought about that (Friday) night and I kinda have to temper my expectations of myself down a little bit so I don’t get too frustrated,” Burrow said. “When we get closer to Game 1 (vs. Minnesota), if this is still happening then the panic button will start off. But, right now there’s no panic button going on. Just got to get the reps back.”

In other words, if the Bengals quarterback isn’t worried, then Bengals fans who are pinning everything on No. 9 shouldn’t be either.

“As we get closer to Game 1 (vs Min) and this is still happening, the panic button will start off.” Joe Burrow admits frustration, checking his expectations right now. #Bengals pic.twitter.com/q43K2MqFUH

Yes, the defense has improved, especially the secondary. There are veteran defensive backs that have been brought in to beef up the pass defense and early on in camp, they’ve been winning the battles, forcing Burrow to be pinpoint accurate, something he’s clearly not shown – yet. But most of all, Burrow’s internal clock in the pocket needs calibration.

“It’s just a little sped up right now,” Burrow said before Saturday’s practice. “Something that makes me who I am is being able to stand in there and take a hit and throw the ball where it needs to go with pressure on me, and so that will be what I need to get back to.

Where would he put his level of frustration?

“It’s up there. It’s frustrating right now, more so just not feeling like myself,” Burrow added. “I know I’ve put the work in to make my knee feel good, make my body ready for the season. It’s just now trusting my abilities, trusting my work, trusting everything.

“Every camp starts slow. It’s very rare that you just jump right back in and go 100 percent, feeling great, every ball’s not hitting the ground. That’s very rare, especially with these circumstances, so we’re not panicking right now. We’ve got plenty of time before the first game, a month and a week, however many practices that is, so we’ll get it right.”

Asked Brian Callahan what he sees as the biggest potential areas of improvement in Joe Burrow and #Bengals O. “I still think we’re looking for improvement down the field… I do think our intermediate game is as good as anyone’s in football.” pic.twitter.com/As5Uo7t65I

Offensive coordinator Brian Callahan is with Burrow in holding off on pushing the panic button.

“He’s got some things he’s working through coming off the surgery,” Callahan said. “(Paul Dehner) asked me at the (media) luncheon what would be the biggest thing for him to overcome and that’s confidence. That’s the ability to stand back there in the pocket against a live rush and feel like you don’t ever have to think about, and we’re not there yet. That’s expected to be honest with you.

“I don’t know if Joe expected it, but I’ve seen enough guys with injuries coming back that it takes some time to get comfortable again and get confidence back without thinking about anything other than doing your job at an elite level. I’m sure that’s definitely a part of all of that, and the only way to get better and more confident is just to keep going out there and getting back behind the pocket and playing football. I’ve got no worries about that. I think Joe will be where he needs to be by the time he needs to be there, and that’s come the second weekend in September.”