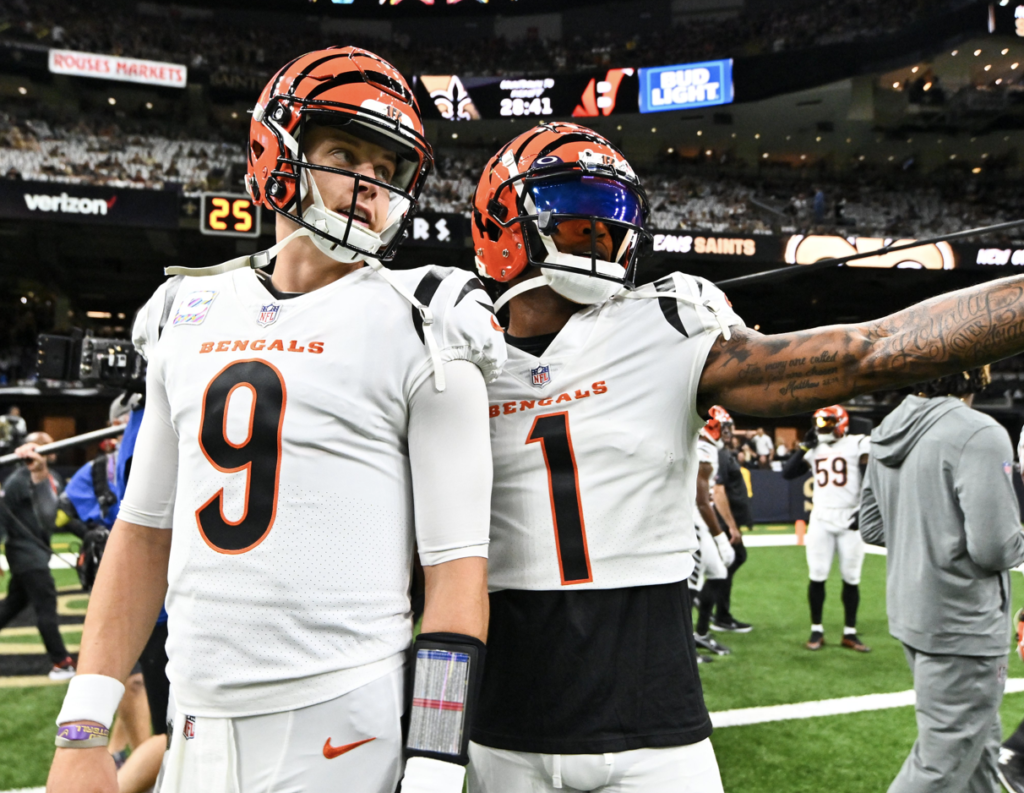 NEW ORLEANS — Joey Franchise may have picked the perfect time and place to return to form.

Returning to the same venue where he capped a 15-0 national championship season with LSU, Joe Burrow led the Bengals back to a critically needed 30-26 win over the Saints at a raucous Caesars Superdome.

Throughout much of the game, a Bengals win felt improbable – if not implausible – going up against a shorthanded Saints team that had better execution for the better part of three quarters. The Saints were without their top three receivers and their top cornerback and yet, the Bengals were floundering after a pair of 14-play second-half drives by the Saints.

But if there’s real reason for hope for the 2022 Bengals it’s how their best two players played in a hostile environment when they needed it the most.

Joe Burrow finished 28-of-37 for exactly 300 yards and three touchdowns. He finished with a superlative passer rating of 126.0. Ja’Marr Chase had seven catches on 10 targets for 132 yards and two touchdowns.

This Superdome crowd of 70,004 was not cheering on Burrow and fellow former LSU star Ja’Marr Chase. Most in the stands were pulling for their undermanned Saints to fend off the high-powered Bengals. And they almost did.

But Burrow made sure that the Bengals didn’t falter when the decibels were reaching jet engine levels.

He scrambled around 20 yards on third-and-4 at the Bengals 31 to avoid a sure sack when the Bengals were down 26-21. He ran back as far as his own 16 and then cut back to the middle of the field, found Tyler Boyd over the middle at the 38 for what turned into a 10-yard gain. It was the play that symbolized the day more than any other. And maybe the season.

“It’s third down. The game is on the line, basically. I know that I had to make a play,” Burrow said. “In those situations, I know that I can extend plays further than maybe I usually would, so I trusted my training. I knew we needed a play. (Tyler Boyd) did a great job of getting open. It was a great play for us.”

That drive ended with a pair of Joe Burrow sacks and a 52-yard Evan McPherson field goal.

After the defense came up with their biggest stop of the day at the most crucial time, Burrow got the ball back at the Cincinnati 40. One pass. One catch by Chase at midfield near the Saints sideline and two missed tackles and it was off to the races for a game-winning 60-yard touchdown with 1:57 left. The Bengals and Burrow had finally found the missing ingredient for the big play and the biggest moment.

“That was an unbelievable play by him,” Burrow said. “When the going gets tough, I’m going to try to find that guy and he’s going to make plays for us. I’m never surprised by that guy. When I saw the look, I knew that I was going there. They are a good defense, a really good defense. They made it tough on us all day. We get a play down the stretch to get the win.”

“Me and Joe were on the same page with the back shoulder,” Chase said of the toss. “He threw me that way I could make a guy miss. I saw Tyrann (Mathieu) coming, and I just made a play with my feet.”

Just can't get enough of these two. pic.twitter.com/6jgWaMyHwV

The Bengals defense then held Andy Dalton in check after a couple of first downs and the Bengals had a statement win. Their statement was to themselves: We can do this.

“I think we know who we are now,” Burrow said. “The last three quarters of the game were pretty lights out (offensively) so we’d like to put together a complete game. We were close today. We’ve got to start a little faster. But we made the plays down stretch to win.”

"I think we know who we are now." Joe Burrow explains how Bengals offense heated up in final 3 quarters in win. pic.twitter.com/wWduzP9OEw

What changed Sunday from the first five weeks? Was it his ability to check down and find receivers like Tyler Boyd (6 catches, 6 targets 66 yards) and Joe Mixon? Was it his accuracy. Or was it simply good juju being back in the Bayou? Good juju like wearing the game-worn national championship jersey of Ja’Marr Chase into the building Sunday?

“I wanted to pay tribute to the people of Louisiana,” Burrow said. “What better way to do it than with the jersey that Ja’Marr wore in the national title game?”

“It was crazy when he asked me for it because I really didn’t know what he was going to do,” Chase said. “It was on the wall. I had to take it down just to give it to him. Then, when I saw him with it on, it was kind of cool showing him repping me while I was in my hometown.”

"We knew what we could do all along. Just a matter of how we were going to dice them up." Ja'Marr Chase Bengals pic.twitter.com/0LZKbpIILm

The Bengals trailed 17-7 in the first half and 23-14 after a gut-punching 14-play drive that featured a highly dubious roughing the passer call on Trey Hendrickson that bailed the Saints out of third-and-24 deep in their own territory.

The Bengals lost three defensive players, Jeff Gunter before the game to a knee, Josh Tupou in the first half and Logan Wilson to a right shoulder injury in the fourth quarter.

The Bengals desperately needed a pick-me-up and got it from the guys they expect and need it from the most.

“It was crazy knowing that I was back home,” Chase said. “The crowd was crazy. The fans were crazy. New Orleans fans and Bengals fans were both excited to see both teams. It was an unbelievable experience. It means a lot actually, just knowing that I’ve got the advantage on beating New Orleans. I come back home after the season and (can) talk a little trash. That’s good. I know my family, they all love the Saints. It’s good for me to come back home and rub it in their face a little bit.”

Sunday shouldn’t be a one-off. It needs to be a trend for the rest of the season.