Appendectomy just another "speed bump" for Burrow on the path to a hopeful Super Bowl title. 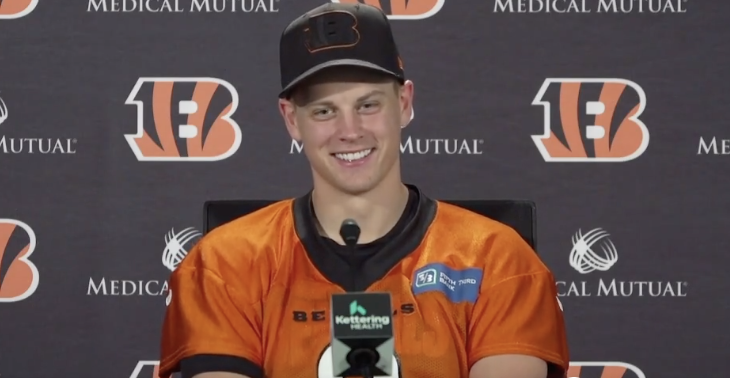 Say this for Joe Burrow, he’s proven he can overcome adversity.

The franchise quarterback of the Cincinnati Bengals spoke publicly Wednesday for the first time since his appendix burst, necessitating an emergency appendectomy and the need to have a more invasive surgery than initially hoped.

“It wasn’t normal appendicitis that you hear about,” Burrow said. “I didn’t really feel much. Just getting checked out and had some discomfort so we thought we’d get it checked out. Turns out I had it. So we had to get it fixed. Not ideal timing, obviously, but glad it happened now and not halfway through the year.”

At some point of his career with the Bengals, he would like to have an offseason that somewhat resembles normal. The pandemic in 2020. The ACL rehab in 2021. And now, following a calm spring and summer, his training camp was disrupted by surgery one day before training camp opened.

“I’d like to have a normal offseason at some point,” Burrow admitted. “That would be great. Going into the season feeling as good as I can but that hasn’t been the reality for three years. Make the most of what you got. We’ll try again next year.”

But that’s what’s great about Burrow’s personality. His “crap happens” attitude has powered him through lean and difficult times in his rookie season and heartbreak at the end of a near-storybook ending to 2021.

An emergency appendectomy is just another hurdle to clear on the path to the ultimate goal, raising the Vince Lombardi trophy on a big dais with black and orange confetti falling around him.

“My whole career has been coming back from speed bumps and adversity,” Burrow said. “I don’t know anything else. It’s just another speed bump in the way. It is what it is. Gotta come back from it. You control what you can control and this is what we’re dealing with right now.”

The fact that Burrow can see this for what it is reflects on his remarkable maturity for a quarterback entering his third NFL season.

Burrow’s intelligence to direct a play pre-snap has drawn comparisons to Peyton Manning. But his self-awareness and calm under pressure are the traits that have led some to compare him to a young Tom Brady.

Those two quarterbacks represent the gold standard of NFL quarterback play in the last 25 years.

But what Burrow has now entering just his third NFL season that those two didn’t is character-defining adversity.

For everything that went right in his 15-0 perfect season of 2019 for LSU, he’s had to overcome challenges from the jump in the NFL.

And just when he thought he was going to hit the ground running, he gets hit with an appendectomy that not only sapped him temporarily of strength but knocked a significant amount of weight off his frame, weight that he worked hard to put on to make himself bigger and stronger heading into his third season.

“Just getting back to where my body was before the surgery,” Burrow said. “I was feeling the best I had coming out of the offseason training. Now it’s just trying to get back to that.

“It was just following doctors orders. I obviously would have liked to be out there faster but that wasn’t the reality for what I had done so we got out there as fast as we could.”

Burrow said he would keep how much weight he lost to himself but when admitting he’s eating “everything” to gain weight and strength back he said, “it’s like the high school days when you’re trying to gain 20 pounds in a couple weeks span. We’re forcing down as much as we can.”

One thing that was very noticeable Wednesday was the smile he wore for most of the press conference. It was a smile that said, “I’m just glad to be back out on the field doing what I love, competing and completing passes.”

There’s plenty of incentive out there for No. 9. He came within one failed fourth down of matching Brady with a Super Bowl title in his second NFL season and he could be in line for a contract that will rival Patrick Mahomes for the biggest in NFL history. He’s the cover boy of Sports Illustrated’s NFL season preview.

King of The Jungle 🐅

“It’s just just another thing that comes with success that will go away without success, so it doesn’t really been anything to me,” Burrow said.

There’s a lot of expectations riding on the shoulders of a 25-year-old kid from Athens, Ohio.

“It doesn’t mean anything if I go out and stink it up all year,” Burrow said. “I’m approaching this season the same way I have approached every season in the past. I’m working really hard all offseason, having a setback, having a comeback from it. I’m really focused on this year and winning as many games as I can.”

Think about this: Joe Burrow was throwing a football in an NFL practice 7-on-7s less than three weeks after being opened up and having a full surgical procedure on his lower abdomen. This was no ordinary procedure. He was back in 11-on-11s Wednesday, completing 10-of-15 passes and looking sharp enough to the point where Zac Taylor trusted he could manage himself.

Burrow will not play in any preseason games but is optimistic he’ll back very close to full strength and will play when the games matter starting Sept. 11 against Pittsburgh.

Joe Burrow is no ordinary pro athlete. It’s not his physical strength that will get him back to another Super Bowl this year. It’s his mental strength and determination to overcome another hurdle that will define his third season in the NFL.

Now, if only the newly constructed offensive line can only protect him and ensure that he doesn’t have to get past any further roadblocks.