Bengals QB isn't interested in other great QBs, just getting his team back to Super Bowl and winning it. 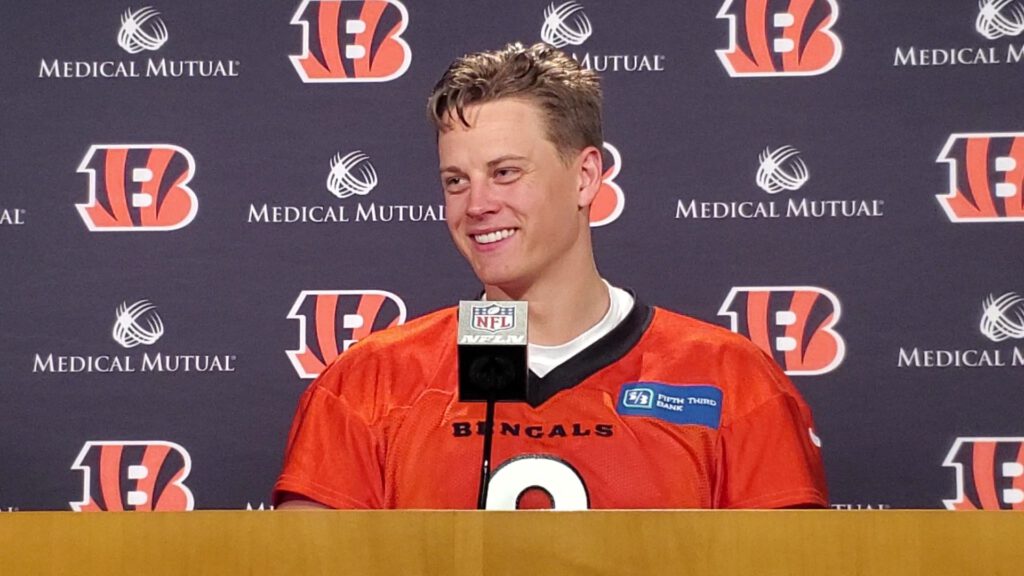 CINCINNATI – Joe Burrow marches to the beat of his own drum.

The franchise quarterback made that abundantly clear last season with the now famous “let me be me” answer to my inquiry when Phil Simms compared Burrow to Joe Montana.

He made his own unmistakable mark on Cincinnati’s unforgettable run to Super Bowl LVI with the way he handled a seemingly unending string of big-game moments down the stretch of the season.

And on Tuesday, for the first time since addressing the media in the staging area underneath SoFi Stadium on Feb. 13, he reminded us of that while there are many leaders on the Bengals, there is one player who stands above them all.

The “standard” is a buzzword around the NFL for teams that set a certain level of expectation year after year. The Patriots, Steelers and Broncos are teams that have instituted some form or fashion of the “standard” around their facility. In New England, it was called the “Patriot Way”, a moniker that was respected inside and treated somewhat derisively outside.

The Steelers have the expression “the standard is the standard” inside the entrance to their locker room inside Heinz Field.

And with the Bengals, the standard now is simply the way Joe Burrow approaches his job and everyone with a pair of eyes can see it.

“I’d say it raised the standard in the eyes of (the media) and the fans, but our standard has never changed,” Burrow said. “Year one I expected to win every game and that’s how I go into every single game thinking I can. I’m not going to accept losing.

“We have the experience now,” Burrow said. “Going into last year, we knew we were good, but I think going into the playoffs, we knew we could win but we weren’t really sure what it took. We just went out there and played really hard and together as a team and it worked out. Now, we know what it takes, and we have that experience in our back pockets going forward.”

And Burrow knows full well the fine line in the NFL. If he has a second more to throw, Ja’Marr Chase is open, and the Bengals likely have their first Lombardi Trophy on display in a case somewhere inside Paul Brown Stadium.

As for the last play of the Super Bowl with Ja’Marr Chase beating Jalen Ramsey and breaking free, what was his recollection of that would-be championship winner?

“Yeah, I checked to that go route. I was anticipating throwing it and just didn’t quite have the time, so. Like I said, we’ve put that behind us. We lost. We had a great year. We’re going forward.”

That might be the single biggest challenge for Burrow and these Bengals. They are going to have to play like last year didn’t happen, good and bad. They know they’re good, and have proven to themselves they’re capable. But now, do it again in the much-improved AFC.

“Like I said before the Super Bowl when you guys always asked me about playing in these big games. I played in the state championship, played in a ton of big games in college and at the time those are the biggest games of your life just like the Super Bowl was. I’ve lost a bunch of those games before, so I know how to handle losing and how to come back strong.

“Obviously, we were disappointed after the game and heartbroken, but we still had a good time that night. Still got together and had camaraderie and all that. We had a little fun. I think we were able to celebrate what we did and at the same time (be) upset about what we didn’t do.”

When the Bengals rebuilt three-fifths of his offensive line this March, in part, because he didn’t have time to pass when it mattered most at the end of the Super Bowl, he was reminded that two of them, Ted Karras and Alex Cappa, have Super Bowl rings protecting Tom Brady. Karras was asked if Burrow has a football presence like Brady has built over his 22 seasons.

“He definitely does,” Karras said. “I think that comes obviously from his performance and his rapport with the guys. And he’s going to keep building it. He’s obviously a younger player in this league, entering Year 3. I think he has a great QB presence, and it’s been pretty smooth these first couple of days running plays.”

So, naturally Burrow was going to take advantage of the chance to pick their brains about the way TB12 approaches his job. Or not.

“I haven’t.” Burrow said when asked if he’s sought their insight about Brady. “I’ll try to take things here and there from different people. But I’m really focused on finding my routine and everything that I do to be the best me,” Burrow said. “And I don’t think I can take something that makes Tom Brady great that might not make Joe Burrow great. So maybe it does, maybe it doesn’t.

“I listen and study all these things and maybe it works, maybe it doesn’t, and I try a lot of different things. But going back down the stretch to the season and talking and thinking about all the things you’ve worked on in the offseason, you throw some out because you think, ‘No, I don’t have time to really refine this, to get it ready to go by the season.’ So, some things will stick, some things won’t.”

That is next-level leadership stuff. That is a quarterback who is comfortable and confident enough with the way he uniquely approaches every game, every practice and every offseason approach in his conditioning and workout program.

While every team is starting from scratch record-wise, Burrow does acknowledge that the culture and the bonds created last year have definitive long-term possibilities in terms of carrying over culture and expectations from the near-miss of 2021.

“Going into the season everyone is starting from scratch, but we’ve all worked really hard to build this culture that we’ve built the last couple of years that’s enabled us to have the success we did last year,” Burrow told me. “So technically, yes, but as far as the grinding and the work to build the culture we’re looking to carry that momentum from last year into this year.”

Burrow is very protective of his identity. This is by design. He doesn’t want to be compared to other great quarterbacks because he believes greatness truly does come from within.

“You know it’s not just me, it’s all the leaders of the team and coaching staff and Zac (Taylor),” Burrow continued. “I think what I try to do as a leader is put some heart into what Zac has to say to the team and take my spin of it. I think that’s the quarterback’s job, to portray the message that the head coach is bringing down and trickle it amongst the locker room.”

That’s the leadership Burrow shows and it’s the message he sends through his work throughout the season and the way he approaches his offseason regiment.

Beyond their connection at LSU, one of the reasons Burrow appreciates Chase so much is he can see how much football means to him, in the way he works and prepares. It’s why Burrow never had a doubt last summer when the ‘drops’ became a national crisis, at least in Bengal Nation.

Remember, Burrow is the guy who reminded his teammates last season – through the media – that hard work and preparation should be seen through performance on the field not through talk.

That was his entire approach throughout early 2021 when he was coming back from his left knee ACL injury. Burrow’s offseason consisted of a couple of days of rest and then back at it, which he did offer up to reporters Tuesday, following a second straight practice without a brace on either knee.

“Yeah, I feel great,” Burrow said with a huge grin. “Obviously, this is my first offseason in the NFL, so I’ve been able to take advantage of that as far as my body and my throwing and my mind and all of that. Obviously, I’ve been grinding, but it’s also been relaxing not having to worry about if I’m going to be ready for the season. I can just focus on getting my body right, making sure I’m healthy and then relaxing.

With Burrow, getting refreshed for 2022 after the longest NFL season in history is just as much about hitting the reset mentally as it is physically. You could tell from his body language on the field, his crispness, and his focus in the press conference that he hit the ground running this week.

“Yeah, I was excited to get back at it,” Burrow said. “Two months is all I need to take a break, take a step back and forget about football and then we’re back at it. I’m excited to get back. Tons of new faces in there. Everyone that has come in here has really added to the culture of the locker room, so I’m excited about all those guys in there.”

Of all the reasons to be excited about this Bengals team in May, the quarterback with the confident smile and cool leadership is at the top of the list.