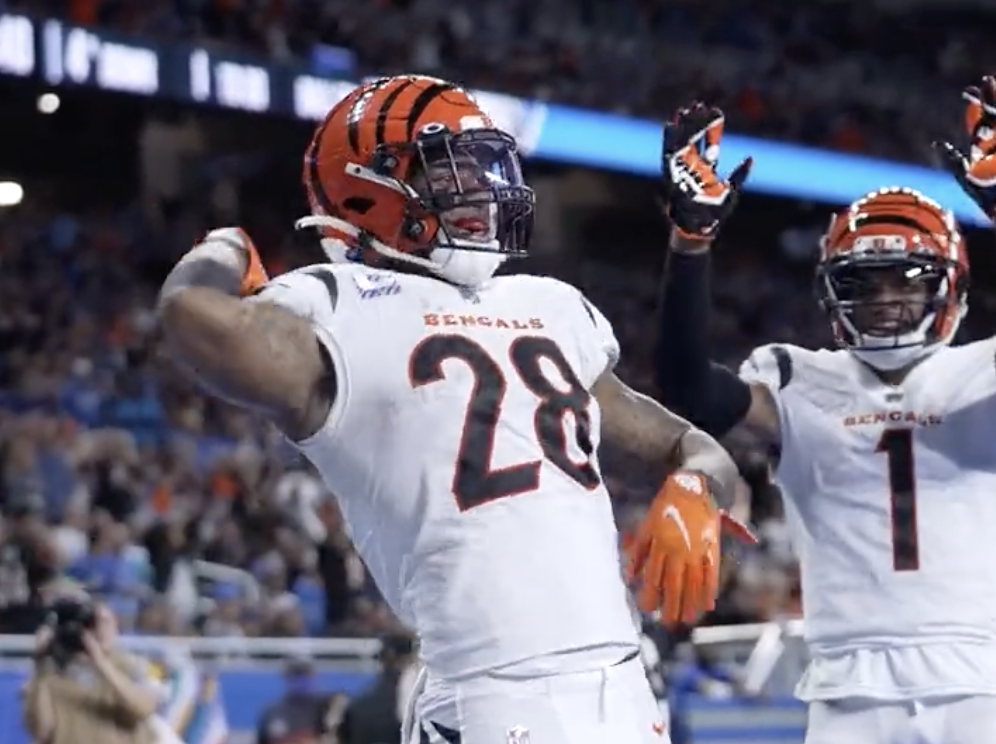 DETROIT — Joe Burrow threw three touchdowns and Joe Mixon caught a key second-half 40-yard touchdown pass on fourth down as the Bengals ran away from the Lions, 34-11, Sunday at Ford Field.

Mixon did damage in the run and pass game, catching five passes on six targets for 59 yards and a touchdown while carrying the ball 18 times for 94 yards for the Bengals, who improve to 4-2 and remain one game behind the Ravens in the AFC North. The two teams meet next week in Baltimore in the second game of Cincinnati’s three-game road trip.

Joe Burrow needed to play just three-and-a-half quarters, completing 19-of-29 passes for 271 yards, three touchdowns and one interception. Brandon Allen came in and directed a touchdown drive with a seven-yard TD pass to Auden Tate.

“He’s just going to keep on making them.” Joe Burrow on Ja’Marr Chase ability to keep making huge plays before half. #Bengals pic.twitter.com/IQSqgTB3zq

“Proud of our team today,” coach Zac Taylor said. “That’s a step in the right direction. That’s what we needed, coming on the road after a loss and do. And it wasn’t perfect. There’s a lot of things we have to clean up, particularly in the first half. But I thought our guys did a great job of playing in control in that game, and different units stepped up when we needed them to. And that was big. A big win. Just proud of our guys, proud of the effort there and now we just have to put that one behind us and move forward.”

The Bengals avoided losing to a winless team for the second time this season and rebounded against Detroit after the loss to Green Bay the way they did against Pittsburgh following the loss to the Bears.

“That’s the next step for this team,” Taylor said. “I told the team (Saturday) night I saw how you responded to the Bears loss in Pittsburgh, and we’re going to need that again. There was some bittersweetness earlier this week with that loss (to Green Bay).

“We were anxious to get this one underway and put that behind us. Just proud of the way the guys handled the week. They were focused. A short trip (Saturday) night. Guys were focused. You just had the sense in pregame warmups that this was the kind of game our guys were going to play. They did.”

Ja’Marr Chase had four catches on six targets for 97 yards. Cincinnati’s bid for its first shutout since 2014 in Cleveland ended with 8:36 remaining in the fourth quarter when Austin Seibert connected from 35 yards out.

"It just means he believes in my abilities." Ja'Marr Chase on Joe Mixon comparing the rookie to Jerry Rice. #Bengals pic.twitter.com/pJxb9BWhCG

“He’s a huge part of our offense. He’s been taking the top off,” Mixon said. “He can take a slant and go to the crib. He can do whatever we much pretty much want him to do. He can block. It makes my job easier and it helps out in the run game because when he takes the top off defenses they have to respect that.

“They have to back up. I know they tried him a few times and when they try him you see what happens. He thrives on those opportunities and that’s what makes him a great player.”

The Bengals took a 7-0 lead on an athletic and skillful play by Chris Evans, who extended his arms and dove for a catch on a 24-yard wheel route.

A catch to remember for @Kidnplay_abc123!

But from that point, the Bengals offense sputtered and self-destructed the rest of the first half, despite the chance for big plays.

Trey Hill made his first career start at right guard and committed holding and false starts on consecutive snaps and was pulled for Jackson Carman. The back-to-back penalties put the Bengals in second-and-25 at their own 25.

Burrow threw for Chase on the next drive and it went through his hands and was picked off by Amani Oruwariye and returned to the Bengals 23. The Bengals were bailed out by an unsportsmanlike penalty on Tracy Walker for taunting.

The only redeeming qualities of the first half for the Bengals were Evans and their defense. Evans made a terrific open field tackle on a punt return and the touchdown catch.

“We really made some mistakes in the first half that limited our ability to move the ball. We had some big plays called back by some penalties,” Burrow said. “That was frustrating. That was a frustrating first half. The defense, they just keep doing their thing every single game. They’re led by a great guy in Lou who really gets them to know their scheme every single week and when you have a defense like that we’re going to be in every single game.”

Trey Hendrickson was in Jared Goff’s face the entire first half, starting with Detroit’s first drive. Hendrickson has one sack, two hurries and two tackles.

The Bengals twice stopped the Lions on fourth-and-1 keeping the shutout in play.

Just before halftime, Burrow and Chase connected again on a pivotal play. Facing third-and-10 from their 40 with just 23 seconds left, Burrow stood in the pocket and took a big hit, throwing a perfect sideline fade to Chase at the Lions 26. That set up Evan McPherson’s 38-yard field goal at the halftime gun and a 10-0 Bengals lead.

Burrow to Chase at the end of the half. Doesn't get old. 😏

The Bengals offense looked much-improved in the second half. The key was a gutsy fourth-and-1 call at the Lions 40. With the line moving to the left, Burrow bootlegged with Joe Mixon to the right and Burrow threw to an unguarded Mixon for a run down the right sideline.

Joe to Joe for 6️⃣

Ja’Marr Chase came over and applied a strong block on safety Will Harris to spring Mixon for the final five yards and the Bengals second touchdown of the day. Just prior to the play, Jackson Carman sat on the turf for several moments and came out with an illness. Trey Hill returned in time for the 40-yard score to Hill’s side.

The Bengals followed that drive with a workmanlike 11-play, 58-yard drive, ending in an Evan McPherson 40-yard field goal and a 20-0 lead.

Burrow found Chase for 53 yards to the Lions 22 to end the third quarter. Mixon followed with an 18-yard gain to the Lions 4. Burrow took a terrible 12-yard sack before finding Chris Evans on a dump off for 13 yards and a 3-yard lob in the end zone for C.J. Uzomah, who made a outstretched catch over his head for the touchdown and a 27-0 lead.

Brandon Allen, who replaced Burrow with the game no longer in doubt, found Auden Tate on a rollout to the left for seven yards and an easy TD with 5:16 remaining.

Run To Daylight: Why Bengals Run Wide and Why The Draw Is So Dormant In Today’s NFL