Mike Hilton scores pick-6 against former team, Tee Higgins over 100 yards as Bengals make it three in a row over Steelers 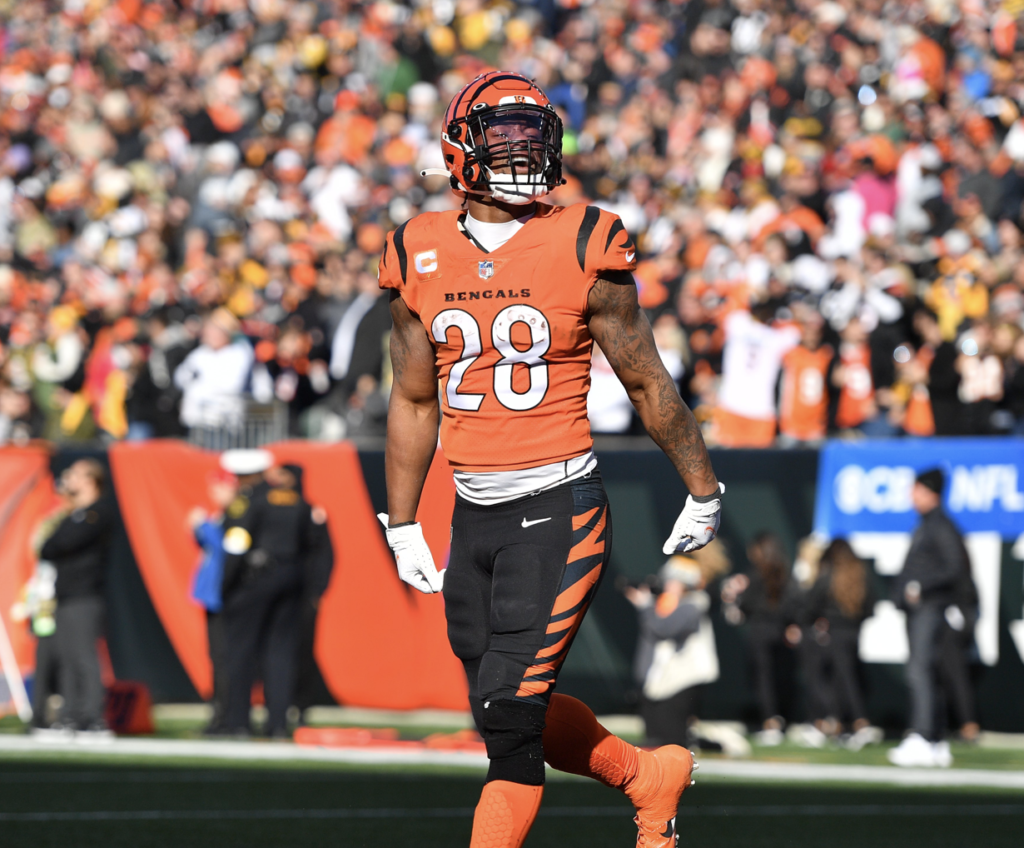 CINCINNATI — Joe Mixon ran for a career-high 165 yards on 28 carries and Mike Hilton had a pick-6 against his former team as the Bengals raced out to a 31-3 halftime lead and cruised to a 41-10 blowout win over the mistake-ridden Pittsburgh Steelers Sunday at an ecstatic Paul Brown Stadium.

Joe Burrow ran for nine-yard touchdown and threw a 32-yard touchdown pass to Tee Higgins as the Bengals picked up a key divisional win and improved to 7-4 on the season. Higgins finished with six catches on eight targets for 114 yards for Cincinnati, which is now 3-1 in the AFC North. The Steelers fell to 5-5-1 in the AFC North and were swept by the Bengals in the season series for the first time since 2009.

I definitely I feel a lot more confident, and I see (the offensive line) being a lot more confident, them wanting to run the football and run it effectively,” Mixon said. “At the same time, we all know that there’s going to be more games that we’re going to have to pass to win. And there’s also games like today, where we’re gonna have to come out and run the ball and actually finish running the ball.

“So in terms of them guys up front, I just see the camaraderie they have with each other and the chemistry. Them guys are like no other. They come to me all the time, (asking) what am I looking for, what do I see on this run, what do I have to do to be put in the best position to get certain yards. I’m just happy for them. They make my job a lot easier and by me being who I am, I’ve just got to keep on going and making them plays that everybody expects me to do.”

The crowd of 63,238 watched as the Bengals won their third straight against the Steelers for the first time since winning six in a row from 1988-90. The game had the feel of the 42-7 Bengals rout of the Steelers at Riverfront in the 1988 Super Bowl season and matched the 41-10 win in 1989. The Bengals have scored at least 30 points in four of their last five.

Mixon, who had 117 yards on 20 carries in the first half, ran for his second touchdown early in the fourth quarter to put the Bengals ahead 41-3. Mixon and Burrow were both pulled for the majority of the fourth quarter.

Burrow, who completed his first seven passes, finished 20-of-24 for 190 yards, a touchdown and an interception.

The Bengals defense rattled Ben Roethlisberger all day, holding him to 24-of-41 for 263 yards, one touchdown and two interceptions.

The Bengals did sustain two injuries on the offensive line worth monitoring, as right tackle Riley Reiff injured his left ankle in the second quarter and center Trey Hopkins left in the second half with a knee issue.

The Bengals converted five first downs and Burrow capped off the drive by escaping pressure and running off to his left for an eight-yard TD run, his first this season and fourth career.

Whatever it takes, @JoeyB 😤

The resurgence of Eli Apple continued on Pittsburgh’s first drive when Ben Roethlisberger targeted Chase Claypool at the Cincinnati 45. The corner stepped in front of the pass and raced back to the Pittsburgh 5. But as was the case against the Jets when Jessie Bates returned a Mike White interception to the Jets 1, the Bengals couldn’t punch it in. Unlike New York, the Bengals were able to salvage points as Evan McPherson drilled a 31-yard field goal for a 10-0 lead.

The Steelers mounted a drive with a pair of Roethlisberger first-down tosses, including a 41-yarder to Claypool over Apple on the opening play of the drive. That play put the Steelers first-and-10 at the Bengals 34. But the Bengals defense stiffened and the Steelers settled for a 40-yard Chris Boswell field goal, cutting the Bengals advantage to 10-3.

From there, the Bengals thoroughly dominated the rest of the half thanks to the arm of Burrow and the legs of Mixon.

Burrow threw a beauty of a lob to Tee Higgins down the right sideline. Higgins leaped and “Moss’d” Steelers corner James Pierre for the 32-yard touchdown and a 17-3 Bengals lead.

“You know, before the play, pre-snap recognition looking at the defense, seeing that it was one-high, and I saw that the safety was cheating toward Chase, so I know that I would get sink coverage one on one, and Joe gave me a chance and I came down with it,” Higgins said.

Make that 8️⃣ straight games with a TD for @Joe_MainMixon!

The Steelers faced third-and-1 at their 34 and instead of running the ball and extending the drive, Roethlisberger looked for Claypool over the middle. Jessie Bates arrived just in time to jar the ball loose and force a punt. The Bengals had just under two minutes to move the ball down the field and appeared to be in position to score another touchdown. But after an offensive pass interference on Ja’Marr Chase, Burrow, on second-and-20 from the Steelers 36, threw an ill-advised pass for Tee Higgins and Minkah Fitzpatrick, off COVID-IR, came over to intercept.

But instead of taking the possession and taking a knee at their 21 with 37 seconds left, Roethlisberger tried to force a pass to James Washington and former Steeler Mike Hilton stepped inside and easily picked off the pass for a 24-yard pick-6 and a stunning 31-3 Bengals lead with just 30 seconds left in the second quarter.

Glad to have you in Cincinnati @MikeHilton_28