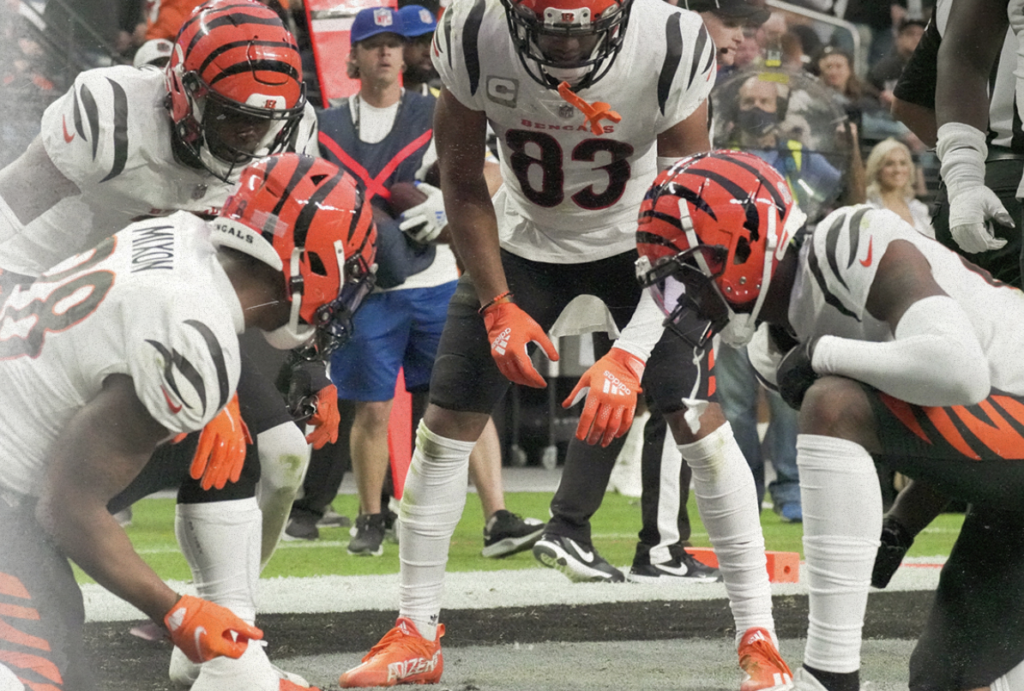 LAS VEGAS – Joe Mixon knew Sunday what was at stake. In Vegas, one always needs to take the odds and stakes into account and not leave the table before you have a chance to get hot.

Mixon played with an urgency on every snap. He may have been hit behind the line of scrimmage on several occasions and taken his two or three-yard losses. But that’s what kept him going in one of the most critical games of the season at the Death Star known as Allegiant Stadium.

Mixon kept going to the tune of 121 yards on 27 carries and two touchdowns that carried the Bengals past the stubborn, hard-charging Las Vegas Raiders, 32-13.

He knew he had to keep going because it was the only chance the Bengals had to take the heat of Joe Burrow, who took a beating in the first half but did what he always seems to do, bounce back up off the turf.

What Mixon provided the Bengals was the best kind of pick-me-up on a day when the Raiders seemed to be driving in an express lane to the quarterback.

In the first half, Mixon had three negative runs and had just 26 yards on 11 carries, with 11 of those 26 coming on the second quarter touchdown that put the Bengals ahead for good, 10-6.

“Sometimes it can get frustrating,” Mixon admitted. “A player like me, I always expect to do whatever I can to put the team in the best position. My style of ball, I try to be the guy that sets the tone, and it was getting physical.

“Coach stuck with the run, and it was little things I had to do with footwork, my eyes, and once we got that stuff figured out, the guys playing linebacker were trying to shoot into their gaps and I was telling them, the center or guard can climb up to the linebacker and we’ll make them pay for over shooting. We came back in the fourth quarter, set our foot in the ground and made them pay.”

Maybe it was going ahead that caused Mixon to break into the “air dice” celebration. Or maybe it was just a sign to his teammates that they need to just keep rolling the dice with him in the run game until they hit it big.

Fortunately, the Bengals didn’t go broke and were determined to keep rolling with Mixon until he hit his winning number. His 20-yard jackpot to the house following Eli Apple’s interception put the game on ice and gave the Bengals a 29-13 lead.

Mixon had five runs of over 10 yards in the second half as he ran his total to 121 yards. No one could have seen that coming in the first half, except Mixon, Burrow and the coaching staff.

“That’s kind of how rushing goes in the NFL,” Burrow observed. “It’s tough to run the ball in the first and second quarter when guys are fresh. And then, you know, as you wear on teams that’s when the dam breaks in the second half. You know, we kept at it and we knew exactly what kind of game it was going to be. Worked out exactly how we thought it would. It was going to be tough at the beginning.

“We were going to have to stay patient. Not turn the ball over. You know we had that one turnover, but other than that we protected the ball well. We got up, we kept putting points up on the board, we kept getting field goals. And then at the end defense got a great turnover and we start scoring some touchdowns. So, it’s exactly how we thought it would work out.”

Asked Joe Mixon about significance of the road win and setting up rest of season. "We're going to do our best to put ourselves in best position every Sunday." #Bengals pic.twitter.com/JgIkgnSdDx

“You’ve got to stick with the run against them,” Zac Taylor said. “They have done a great job against explosive passes this year. I think a lot of Gus Bradley and the staff that he has over there. I thought that they did a really good job keeping us off-balance in some areas of the passing game. We knew it was going to be that style of a game and that we were all going to have headaches by the end of it and one that we had to deal with it, but we got it done.”

Sunday gave Mixon hope that the final seven games could really take on added significance, especially if he’s able to give Burrow the kind of support the quarterback received in the second half.

“It’s been a little bit on my mind,” Mixon said. “But, you know, everything going on like you said, the weather turns and to be real, man, with the history of me being in Cincinnati, usually November and December become them games where they lean on me, and I’ve been really doing big things and finishing very strong.

“For me personally, I’ve gotta do whatever I can to prepare my body for whatever. I gotta get ready for. I’ve just gotta get ready each and every week to be able to take on that pounding. I’m ready for it. I’m ready for whatever for whatever they throw me. I know sometimes, it might be more of the run. Sometimes, more of the pass. But I definitely look forward to playing November, December, because like I said, we have everything and every team that we need to get in the playoffs. We just gotta give everybody our best shot, each and every week and put our best forward.”