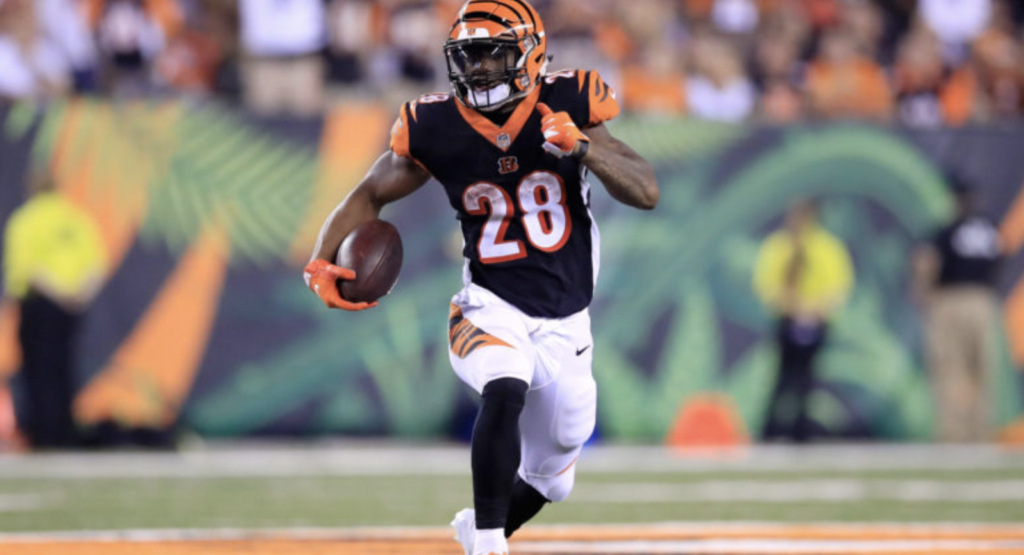 CINCINNATI — Joe Mixon feels full strength and ready to take on the 2021 season.

That was the biggest takeaway from his first meeting with reporters since suffering a season-ending foot injury during the loss to the Colts last Oct. 18 at Lucas Oil Stadium.

Mixon spoke inside Paul Brown Stadium Friday detailing a number of subjects including his health, confidence in the revamped offensive line, his love of the game, leadership and his new nickname for the offensive group that has yet to light up the defense in training camp.

With three potentially elite receivers, a top young quarterback and himself at running back, I asked Mixon if he has a good sense of the dynamic potential of the offense.

“To me, I think the offense, everybody should be very excited about the offense,” Mixon said. “I know for me, we got a really four-headed monster. If you want to, I guess, include Joe (Burrow), it’s the Fabulous Five, you know what I’m saying? To me, like I said, man, it’s great things to come. I feel like there’s going to be a lot of points scored. I know Joe is going to run it how he runs it. For me, I try to do whatever that I can to put the team in the best position to win. Everybody’s looking forward to it. I just can’t wait until Week 1.”

As for his health, Mixon said he received a clean bill of health back in February or March and knew at that time he would be full strength for the start of this season.

“Last year was tough,” Mixon said. “Last year was definitely tough. I was bad. It sucked looking outside because I couldn’t one, be there for my team. They needed me. I needed them. The best thing about that, though, was I had people around me at the time. I have people around me that I can lean on. I was definitely in a bad state. But one thing that they always did was keep me up. I appreciate everybody for that. It sucked and it’s over with. I get to move forward and move past it. Like I said, I’m excited for this year. I’m in great shape and I’m ready to roll.”

Mixon made it clear that he and the team were on the same page in terms of not rushing him back and waiting until 2021 so he could hit the ground at full speed.

“I feel like a kid out there” A fully healthy and happy @Joe_MainMixon is all in on these #Bengals Sounded a very optimistic tone Friday pic.twitter.com/gc9TBCiiCW

“It just came down to pretty much being smart,” Mixon said. “It was a tough decision to make, but at the end of the year, toward pretty much the end of the last two, three games, coaches were just like, ‘Just shut it down and get ready for next year.’ It was definitely tough. I wish I was able to be out there. That wasn’t able to happen. But I’m here now and I’m ready to roll.”

Mixon has looked like his old self during camp and has been – by far and away – the best part of watching the Bengals offense in the first two weeks of camp.

“Y’all see me running every day, cutting,” Mixon said. “I feel great, man. Like I said, I’m just ready to roll, get this ball rolling. Pretty much in about February, March. That’s when I pretty much started really going hard with all of my training. That’s pretty much been about it. Ever since, I’ve been full go.”