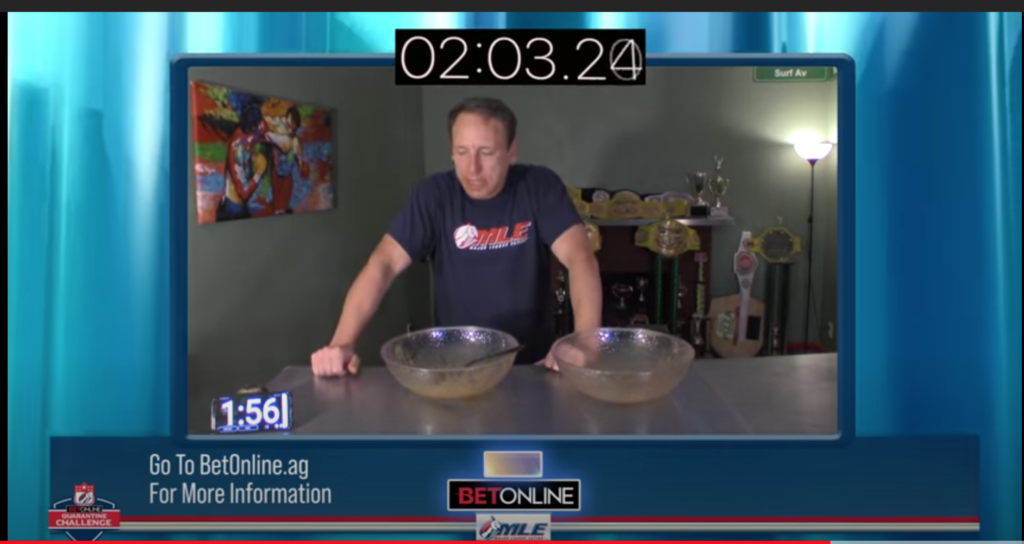 In not so surprising news, the world’s number one competitive eater, Joey Chestnut has advanced to the final of Major League Eating’s Bet Online Quarantine Challenge.

In a head-to-head matchup of consuming ten pounds of baked beans, Chestnut defeated Nick Wehry and will face off against the #1 overall seed, Gideon Oji in the finals.  Oji advanced by defeating Darron Breeden.

THE WORLD NEEDS INSPIRATION. NOW IS THE HOUR WHEN GLORY CALLS. AND ONLY THE BRAVE ARE LEFT STANDING TO ANSWER!

Chestnut had an equally impressive win as well — nearly lapping his opponent Nick Wehry.  Almost finishing his second and final bowl of baked beans before Wehry finished his first.  Chestnut nearly broke two minutes, as Oji, but left one more bean in the bowl before finishing and coming in at 2:03.

Chestnut and Oji will meet tonight in the Finals, with the winner becoming the #BetOnlineEats Quarantine Challenge champion.  The Final will consist of ramen noodles — 10 individual ramen noodles cups.

BetOnline.ag has the matchup as a coin flip.  Oji and Chestnut are both -115.  Oji and Chestnut are also the even money favorite to post the best time to complete the round at +100.  Wehry and Breeden will take part too, as they’ll face off in a consolation round, with Darron Breeden the heavy -400 favorite.

WATCH: Wednesday, May 22 at 7 PM ET on MLE’s YouTube Channel

Bet on #BetOnlineEats at www.betonline.ag and Use Code CLNS50 for 50% cashback on first deposit