John Beecher on Being Drafted in First Round: ‘My Whole Body was Shaking’ 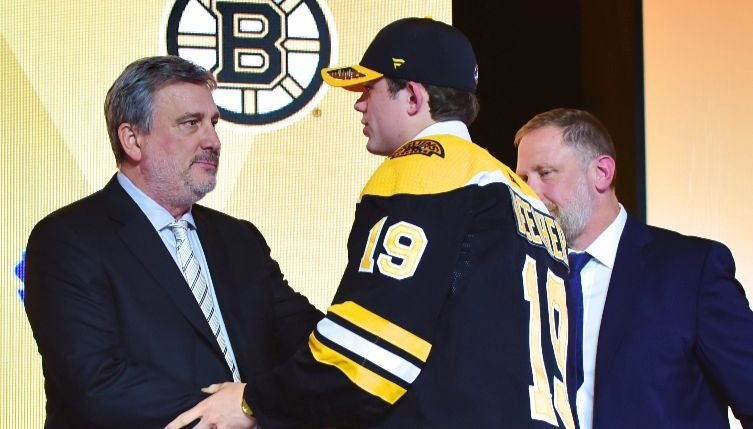 When the Boston Bruins selected John Beecher 30th overall in the first round of the 2019 NHL Draft, hockey fans across the world saw an excited Beecher hug his family, walk to the stage, put on a Bruins jersey, and shake hands with the Bruins brass.

For Beecher, it was the culmination of a lifelong dream coupled with a lot of nerves.

“It’s pretty special to be able to go up on stage and hear your name called,” said Beecher. “As soon as I stood up I couldn’t even really remember much after that. I was on the stage in awe shaking. It was nuts.”

Beecher was the third line center on the stacked US National Team Development Program. Even though he was with the bottom-six, he still put up 15 goals and 43 points in 63 games. The two centers ranked ahead of him on the depth chart were Jack Hughes, who went first overall to the New Jersey Devils, and Alex Turcotte, who went fifth to the Los Angeles Kings.

Beecher was the last of eight USNTDP players selected in the first round of the 2019 Draft.

“It was awesome,” said Beecher of seeing lots of his teammates get drafted. “I was just as happy for those guys as I was for myself. I watched them and how hard they worked over the past two years to get to where they are. It really showed how much talent we really had on our team and how far we’ve come and I was extremely happy for them and can’t wait to see what they do down the road.”

But sitting through 29 other guys picked ahead of you isn’t easy. When the Bruins were next up on the clock, Beecher’s expectations rose.

“I wasn’t 100% sure [the Bruins] were going to take me and then once the pick rolled around I was getting a little bit more anxious,” he said. “I was actually sitting next to my mom and my brother and you could feel the tension start rising as we were getting down to the end there. Once we heard our name called, it was surreal. It was a once in a lifetime moment.”

As amazing as it was, some were very surprised that the B’s took Beecher with the 30th pick given some of the other players available. But for the Elmira, New York native, being able to even be picked on the first night was a big relief.

“To be able to go back to that night, it’s gotten a little bit of weight off my shoulders,” he said. “It’s a little bit of a relief. Something you’ve been worrying about for quite some time and to finally have your name called is pretty special.”

Once up on the stage, that’s when relief turned into nerves.

“You hear a bunch of the guys interviewing up on the big screen during the draft and they said they were shaking and I thought they were kind of just saying that, giving it a little bit more of an effect,” said Beecher. “But I literally got up there and my whole body was shaking. I couldn’t even put into words how special it was for me and my family. At the end of the day, it was amazing.”

Many disagree with the Bruins taking a well-rounded player in the first round rather than someone with copious amounts of skill. Despite that, one thing most can agree on is that Beecher’s style of play fits the Bruins’.

“I had a little bit of contact with the Bruins before the draft and I knew they had some interest,” said Beecher. “I knew that my style of play fits right in with theirs. I felt that it would be a great fit.”

Even though Beecher went in the first round, he still doesn’t believe that determines success.

“I think at the end of the day, no matter where you go, you’re getting your foot in the door,” said Beecher. “I don’t think going on the first day dictates anything down the road.”