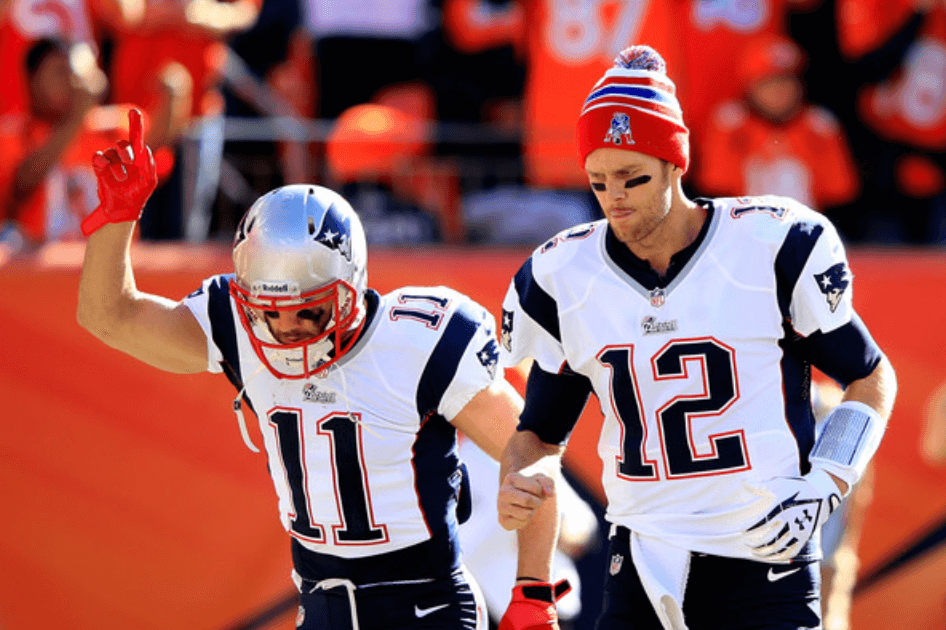 Tom Brady didn’t speak Tuesday to reporters after making his offseason on-field debut during mandatory Patriots minicamp outside Gillette Stadium. But his good buddy Julian Edelman did, and what he had to say spoke volumes about significance of the return of Brady after a self-imposed absence from Patriots OTAs this spring.

Is it a little louder with Brady on the field?

For the first time since tearing his right ACL against the Lions in preseason game No. 3 last August against the Lions, Edelman was on a football field catching passes from Tom Brady during a formal Patriots practice.

“It was great. Anytime you get the majority of the team, most of the team, out here, it’s nice. So, I always like looking at [No.] 12,” Edelman said with a great deal of satisfaction and relief.

Was it strange to catch passes from backup Brian Hoyer during the six previous OTAs and not Brady?

“I’m more focused on what I have to do to improve myself on getting healthy and getting back to where I want to be,” Edelman said, channeling the omnipresent head coach. “So, you can ask other people that question.”

Edelman, a loyal client of Alex Guerrero and TB12, didn’t shy away from giving credit to Brady’s group of trainers who helped him back to full strength while making sure he wasn’t doing too much too soon.

“Yeah, I mean, everyone’s a competitor, so sometimes you’re your worst own enemy when you’re trying to do that,” Edelman said. “But, it is what it is and there’s a big part of the process and I’ve got a lot of guys, training staff helping me out – TB12, all that stuff – to get to where I want to be.”

It was, of course, the TB12 staff and their work with Brady and Rob Gronkowski, that led to a lot of the reported friction between coach Bill Belichick and a number of players, and led to the absence of Brady and Gronk during the first six (voluntary) OTAs.

“It’s been good. Anytime you get to go out and see the fellas and play with them and talk with them and be in the huddle and look at guys and participate in drills – I mean, that’s what you play the game for, ultimately,” Edelman added. “It was tough to watch it all on the sideline last year and to come out here and just to do little things, strap on the helmet, puts in perspective how lucky you are to get to play the game.”

Edelman said he doesn’t know if he’ll wear a brace this season to protect the knee but he’s not wearing one now during minicamp and doesn’t plan on wearing one during the year.

After spending last season in the training room together rehabbing from season-ending injuries, defensive end Derek Rivers said Edelman was the most competitive person he has ever been around. Edelman returned the favor on Tuesday.

“I’ll tell you right now, Rivers – he’s a young guy, works extremely hard. He pushed me. I’m not as young as I once was, and to get to be around a guy as young, hungry as he is – we went to school in kind of the same area, he was Youngstown, I was Kent – along with Nate [Ebner], along with Cyrus [Jones], all those guys, I think you take the opportunity to go in there and you compete. Ultimately, that’s what I am. I don’t say I’m necessarily a professional football player. I’m a competitor. That’s what was instilled in me as a young boy. So, I don’t know.”

This also marks the first season since 2012 that Edelman will be taking the field without Danny Amendola as a teammate. Amendola left for a two-year, $12 million deal in Miami.

“That’s the nature of this beast, this business, is guys come and go,” Edelman said. “You make a lot of relationships that you’ll cherish forever, but it’s sad to see a guy like him go. But, I mean, that’s in the past now, and now you’re looking forward to molding and getting together with your new teammates. Because I could tell you right now, this isn’t the first team to lose a guy like that and it won’t be the last. So, I hope he does well, but I’m more focused on the guys in our room right now and helping our team.”