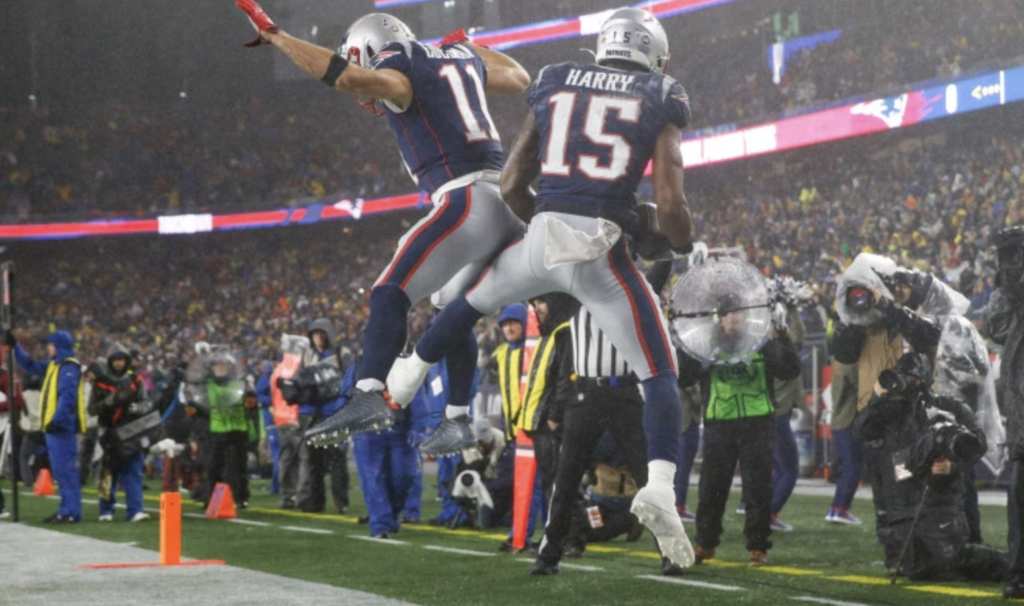 FOXBORO – Time and time again, the Patriots prove they are the best when conditions are the worst.

The wind was driving the rain sideways at 15 miles an hour. The temperature was in the upper 30s but the rain felt like little icicles hitting you in the face.

Their starting left tackle was coming back from a toe injury that kept him out for eight weeks. Their starting right tackle nearly didn’t play because he was so ill all week, including his drive to the game Sunday.

They were down receivers Phillip Dorsett and Mohamed Sanu, forcing Tom Brady and his cranky elbow to rely on Julian Edelman, who was nursing a painfully sore left shoulder, and a pair of rookies in Jakobi Meyers and N’Keal Harry.

There were so many factors working against the Patriots Sunday.

But all of them pale in comparison to the intangibles they continue to show. Call it mental toughness. Call it physical determination. Call it practice execution turning into game reality. Call it whatever you want but the Patriots had the Cowboys beat well before the rain started pelting the Gillette Stadium turf Sunday.

Marcus Cannon, Isaiah Wynn, Julian Edelman and Matthew Slater all came through in the clutch and sucked it up like only the Patriots can in a 13-9 gut-check of a win at Gillette that improved them to 10-1 on the season.

If you want a good reason to think this Patriots group is headed to the Super Bowl in South Florida, look no further than Sunday’s win and how this team continually finds way to overcome any adversity in its path.

The play of the game was Slater making the right read and pushing through the left side of the protection line on a Chris Jones punt late in the first quarter. Slater did just enough to stick his hand in there and block the punt, resulting in Nate Ebner’s recovery at the Dallas 12. One play later, Tom Brady threw a perfect back-shoulder dart to N’Keal Harry and it was 7-0.

“Probably the difference in the game, really, when you come right down to it,” Belichick said. “I thought that Joe Judge and Cam [Achord], we had a real aggressive approach in the kicking game today, and we were trying to challenge the ball handling and I thought we did a good job of that. Forced some tough catches with their specialists, and the blocked punt obviously was a huge field-position play. Enabled us to play from ahead, and that was a good thing.”

There were two muffs on consecutive kickoffs by Jake Bailey, which were intentionally short to force the Cowboys to field them in the wind and rain. The Patriots weren’t perfect. They missed two field goals and dropped at least five passes.

“I was really proud of the way the guys stood up and came through,” Belichick added. “We were missing a few key players, and we had a couple of guys that were playing, I’m sure, well less than 100 percent, but really sucked it up, and played hard for the team and gave us a great effort tonight. So, it was certainly a game that was a lot about field position, and we had pretty good field position.”

But when the game was on the line, the Belichick-coached Patriots made the plays that the Jason Garrett-coach Boys could not.

Even Cowboys owner Jerry Jones admitted as much.

“Special teams is a total reflection of coaching,” Jones said, after watching his special teams yield a Matthew Slater blocked punt that set up the only touchdown of the game in the first quarter. “The special-teams gaffes included a blocked punt that led to a touchdown, plus multiple failures of execution on kickoff returns and a missed field goal.”

“With the makeup of this team, I shouldn’t be this frustrated,” Jones added. “I don’t think there’s a game where a coaching staff couldn’t do better. I don’t like that we’ve got so many [this year] as I’m standing here tonight.”

Well, take it easy on Jason Garrett, Jerry. He was going up against the best coach of all time and the coach that values special teams more than any in the National Football League.

It’s not often that Belichick goes out of his way to single out a player for guts and determination but that’s exactly what he did in praising Marcus Cannon after Sunday’s win as he concluded his press conference.

“I’ll just say one final thing then in closing that one of the real top efforts today would have to go to Marcus Cannon,” Belichick said. “Marcus was, three days, just feeling under-the-weather. I honestly didn’t expect him to play today. We talked before the game and he felt like he’d be able to work through it, so we tried to help him out a little bit there at the half.

“But, I would say overall, it was one of the top efforts I’ve seen. For a guy who just barely had enough strength to put on his uniform, went out there and played against multiple good football players. But certainly with [DeMarcus] Lawrence and [Michael] Bennett playing over there, I thought he played very, very competitively. (He) played tough and is the kind of leadership and toughness that we have on this team, so that was a great job by Marcus.”

Edelman, for his part, was playing with a shoulder that looked like it was killing him each time he landed on the turf. He felt it in the first half making a catch that resulted in a first down. He felt it when he dove without regard for his body on a key second-down catch for 23 yards that put the Patriots in Dallas territory with just under five minutes left in the game. It didn’t result in points, but it definitely helped kill more clock, playing complementary football. Because of that catch, the Cowboys didn’t get the ball back until there was 2:38 left.

It was a little thing that meant a whole lot. The little things always add up when you’re in a Patriots uniform.

“That’s what we strive to be, a mentally tough team, and our coaches do a great job of preparing us,” Edelman told me. “That’s part of them doing what they do, bringing in guys that can play. I think it also comes from practice. When we have good weeks of practice, good things happen. It usually translates. It doesn’t translate necessarily as much as you want it to but you see little things here, little things there and we continue to go out and practice hard and gain confidence and string those types of experiences together, that’s when I think you start getting things going. We’ve just got to stay on it.”