Just How Much Is Torey Krug Worth to The Bruins? 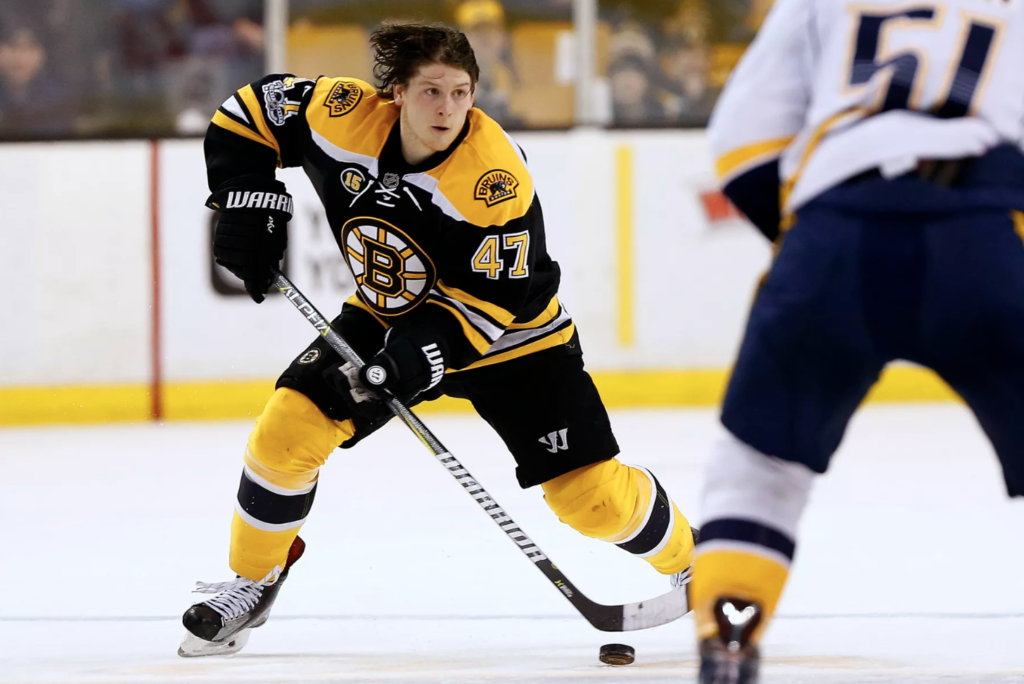 BOSTON – Torey Krug forever won a place in the hearts of many Bruins fans with his length-of-the-ice charge on St. Louis Blues forward Robert Thomas in Game 1 of last June’s Stanley Cup Finals at TD Garden.

As it turned out, it would be the last big moment on home ice for Bruins fans in that series as they dropped Games 2, 5 and 7 and lost the Cup.

That helmetless run at Thomas after taking a hit earlier in the shift in third period was somewhat ironic as Krug from his debut in the 2011-12 season has long been considered a lightning-fast puck-moving defenseman with a laser beam of a shot from the point, particularly on the power play.

Add to that he’s listed at 5-9 and 186 pounds, and Krug is not someone you would expect to take out a bigger player like Thomas.

Sequence of events for Torey Krug:

But that’s exactly what has drawn fans to Krug, his toughness and personality that he peppers in with his elite puck-handling shooting skills.

When Krug went down with an ankle injury against Tampa Bay in Game 4 of the second round in 2018, the Bruins were eliminated in the next game. Krug suffered a different injury to his left ankle in the last preseason game against the Flyers last year and missed the first three weeks of the season. Two years ago, he suffered a knee injury and got off to a slow start the following season.

“The preseason hasn’t always been my friend. In the last two preseasons I’ve found myself on the sidelines,” Krug said before Wednesday’s game. “So, in the years before that I was always competing for ice time and a spot, so it’s a little different now just fine-tuning for the season. I’m still not out of the woods yet with a couple of preseason games to go, but I’d hope coming into the year healthy (would be nice).”

Krug played 17 minutes in his preseason debut Wednesday night at TD Garden, a 2-0 Bruins win over the Devils. Krug was out there Wednesday with what is the core of the Bruins defensive future: Brandon Carlo, Charlie McAvoy and Matt Grzelcyk. That’s not even including 24-year-old Connor Clifton and 27-year-old John Moore or veterans Zdeno Chara, Steve Kampfer and Kevan Miller. Krug was a plus-1 with a pair of blocked shots.

“Well, he looked rusty early, right? And then got better as the game went on,” coach Bruce Cassidy told me. “Kind of like [Matt Grzelcyk] and Charlie [McAvoy] in Chicago, it took him a while. You could tell tonight, [Grzelcyk] was significantly crisper, same with Charlie in their game. So that’s what Torey will be I suspect on Saturday, he’ll go back in with [Brandon] Carlo as a pair and hopefully he’s ready to go Thursday.

“We talked about his schedule for training camp as well. Some of these guys, they were going to play a couple of games this week, whether it was Monday and Wednesday and Saturday or probably, to go back to your question, not use them again three times in the same week. Krug, he wanted to holster together. So there’s a little bit of thought process in there from us and from them. Like I said, he got through it and hopefully better off for it.”

“I think we’re incredibly deep at the defense position, which is a luxury,” McAvoy added. “One of the things… I’m not going to say it, it’s (just) good to have depth. It’s good to have depth. We have guys who can slot in whenever we need them. Just seeing Torey back on the ice, he plays the game with pace and creativity. He makes plays. Just seeing him back out on the ice, it looks like he hasn’t missed a step. You get back to having a full lineup, it’s just exciting.”

In six seasons with the Bruins, Krug has quickly become one of the best offensive defensemen in franchise history.

But how much is all of this worth to the Bruins?

Consider the Bruins have the next puck-moving blueliner in waiting in 25-year-old defenseman Matt Grzelcyk on the roster at just a $1.4 million cap charge heading into an RFA season next year. Sweeney also signed 21-year-old McAvoy to a three-year deal on Sept. 15 with annual cap hit of $4.9 million.

And after inking 22-year-old Carlo to a two-year contract with an annual cap hit of $2.85 million, Sweeney had one of the more memorable quotes of the preseason when asked about the team’s approach to the quarterback of their power play and if Krug was up next for a new deal.

“Everybody has their place in our hockey club, and Torey’s an important part of our hockey club,” Sweeney said on Sept. 17. “We have some forecasting to do, we have some conversations that have to take place, they will. And I’ve indicated to each and every one of our players that we will have those once I have the ability to start to forecast a little more accurately. And then that will move accordingly.”

There are plenty of Bruins fans who are hoping this won’t be Krug’s final one in a Bruins uniform. But for that to happen, there’s still lots of work to do.

“You’ve got simultaneous things going on. There’s no prioritization from the standpoint of one player being in front of the other player,” Sweeney added. “It’s just, having the ability to communicate that you have to make those decisions, maybe based financially, sometimes, maybe based on who’s potentially coming along to replace those players if they decide to leave.

Then there was this ominous-sounding cautionary disclaimer.

“We had players that left our organization this year because they had opportunities and you wish them well,” Sweeney said, referring to the likes of Marcus Johansson and Noel Acciari. “That may happen again, but it won’t be for lack of the Bruins under-appreciating what they’re doing for our hockey club now. I’ll attack each and every one of them when they finalize, either here or somewhere else, that’s to be determined. But we have to do it, with everyone.”

What is Krug worth on the open market if he gets there? A good bet is anywhere between $8-10 million annually. Krug has mentioned on several occasions that he would love to stay in Boston and make it his career home.

But like Sweeney said, there’s a lot to consider and a lot of number-crunching remaining till we get a clearer picture.