Kansas Runs Roughshod Over Boston College, 48-24 In a Friday the 13th Horror Show 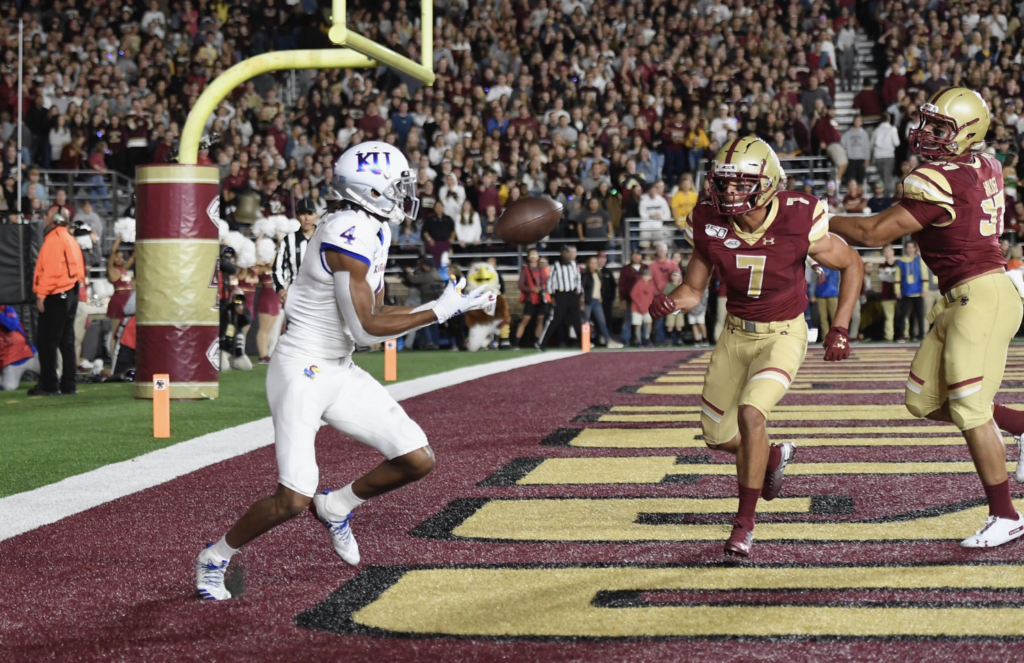 CHESTNUT HILL — This was presumed to be an easy walkover for Boston College. After all, Vegas had BC as a 20-point home favorite over Big XII doormat Kansas Friday night. But the perennial basketball power showed it can run fast-break football just as well, running up 567 yards in a stunning 48-24 romp over BC Friday night at Alumni Stadium.

“Obviously, not a very good performance by us. Give a lot of credit to Les Miles and their team. I thought they got their kids to play hard, and I thought they did a great job out there,” BC coach Steve Addazio said.

“Obviously, I did not do a good enough job getting our team ready to play tonight. I’m responsible for that and it’s my job to make sure we get that fixed. We’ve got to get back on the tape, find out where our mistakes were, find out where the issues were, get them corrected and get ready to go down to New Jersey (vs. Rutgers) next week and get ready to play another game and that’s where I’m at.”

What started as the A.J. Dillon highlight reel turned into a Friday the 13th horror feature (Harvest Moon and all) for the Eagle defense. Dillon had 79 yards on 13 carries in the first quarter and finished the first half with 128 yards on 22 carries and a touchdown. He was running roughshod over the Jayhawk defense.

Dillon’s 2-yard TD in the first quarter tied him with Andre Williams for third place on the school’s all-time list with 28 rushing touchdowns.

Then it was the Jayhawks who quickly turned the tables on a young Eagles defense that was steamrolled over the final three quarters.

Carter Stanley, who threw a pick to BC safety Medhi El Attrach on Kansas’ first possession, recovered immediately and carved up the Eagles in the first half, completing 13-of-15 for 165 yards and three touchdowns.

With Kansas trailing 17-14, Stanley took over. He vaulted to the BC 19 for a 9-yard gain and a first down. He followed that up with a gutsy head-first charge down to the BC 4.

After showing his athletic running ability, Stanley showed his touch with a fade that eluded a pair of Eagles in the end zone and wound up in the hands of Andrew Parchment with 3:41 left in the first half and somewhat amazingly Kansas was on top, 21-17.

Boston College was clearly having issues keep pace with Kansas’ up-tempo offense, which kick started the Jayhawks after BC claimed an early 10-0 lead.

The Eagles responded with a drive of 73 yards in 10 plays, capped off by a perfect execution of the Philly Special from Super Bowl LII, as CJ Lewis ran around from the left flank, took the handoff and ran around to the right, where Anthony Brown leaked out wide open in the flat for an easy 12 yard touchdown. That score gave BC the lead again at 24-21 and apparent momentum before the half with just 45 seconds left in the half.

But the Eagles surrendered an 82-yard run by Khalil Herbert, a gallop that featured no fewer than five blown tackles by Boston College. The run to the BC 3 set the stage for a fade pass from Carter to Parchment with five seconds left for a touchdown, and a 28-24 Kansas halftime lead.

“Backbreaker. We came back, regained momentum, went up on top, and just, you know, we’re in man coverage. We had a run blitz on. I mean, you literally could see our DB still running, he had to run off the field literally while the guys were running down the field. It was bizarro,” Addazio told me. “But we were in our run blitz, and I don’t know what happened. I don’t know what happened on that run blitz. When you blitz, you’ve got every gap covered, okay. Every gap’s supposed to have been covered. Apparently it was not. Somebody must not have been in a gap, okay and that was a backbreaker. And they ran the ball, you know, so we’d like to have that back for sure.”

The first drive of the second half featured more of the same for the Kansas offense and BC defense. Herbert’s 28-yard run set up a 24-yard field goal from Liam Jones and it was 31-24. The Jayhawks essentially put the game out of reach when they put together an 87-yard drive in eight plays, highlighted by a Khalil Herbert 36-yard run and a Pooka Williams run up the middle untouched for 12 yards and a touchdown. A Jones 30-yard field goal made it 41-24 Kansas with :35 left in the third quarter and sent many of the 32,848 to the exits before the fourth quarter.

BC drove to the KU 14 but came away empty when Aaron Boumerhi missed wide right from 31 yards with 11:43 remaining. Another stomach punch was an offsides on a Kansas punt with over 10 minutes left. The infraction gave Kansas a new set of downs and BC didn’t get the ball back until 7:53 remained in the game.

The final indignity was a 4th-and-1 BC had at its 48. Needing just over a yard, Dillon got the handoff and was tripped up and fell inches short of the yardage needed, giving Kansas the ball with 6:48 left. Dillon finished with 151 yards on 27 carries.

Added Anthony Brown, “I’m going to promise you you’ll never see this again. We won’t let this turn into two (straight losses). You’re going to see a complete 360. You won’t see this same team ever again.”