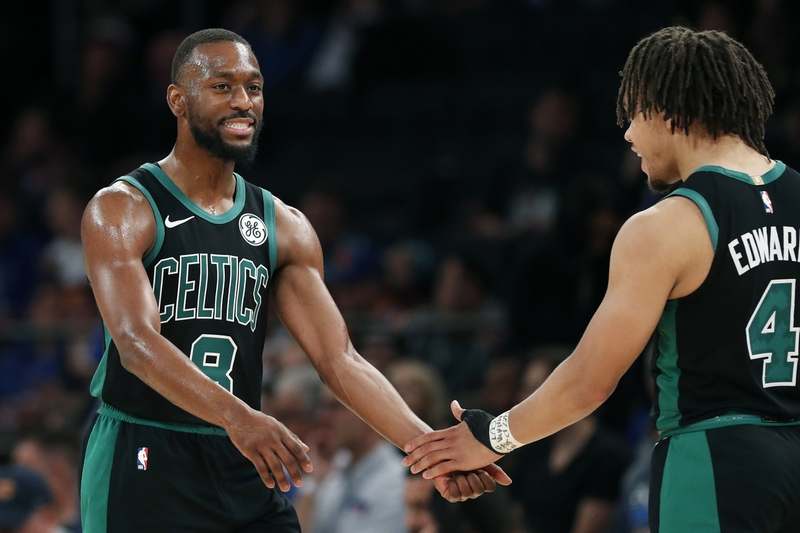 Kemba Walker’s first homecoming in New York since becoming a member of the Celtics went as well as he hoped.

With Celtics jerseys sprinkled around the crowd at Madison Square Garden, the Bronx native donned his new black Celtics road uni and gave the fans a show on his way to his first 30-plus point night of the season. Walker netted 32 points on 11-of-17 from the floor, including 22 points through three quarters in a 118-95 win over the Knicks.

Boston broke a 72-72 tie in the second half and never looked back. They grabbed a double-digit lead in the fourth quarter, thanks to an additional 10 points from Walker and blew the game open before the Knicks knew what hit them.

The Celtics’ momentum began and ended with Walker’s offensive production, which also led to defensive stops and easy buckets on the other end.

“I think our energy, we picked it up,” Walker said. “Defensively, I thought at times we let our offense dictate our defense. We just kept ramping it up and were able to come out on top.”

For Walker, he’s had stellar performances at Madison Square Garden that date back to his high school days. He attended Rice High School in Harlem, went on to play at the University of Connecticut — which led to playing many games in New York City and has played well in the familiar building throughout his NBA career against the Knicks.

“It’s great energy here, I’m from here,” Walker said. “I’ve been playing here since I was in high school so it’s always good to come back. This is one of the best arenas in basketball. This place is special.”

It was a special performance. After a trying season debut in Philly and a promising game at TD Garden Friday against the Raptors, it was refreshing for Walker to put up a 32 piece on the Knicks in only his third game as a member of the Celtics.

Jaylen Brown finished with 19 points, Jayson Tatum poured in 15 to go with his 9 rebounds and four steals but it was Walker’s game-closing finisher that put New York to sleep for good. Third overall pick RJ Barrett scored a team-high 26 points in his home debut, Mitchell Robinson added 17 points and Julius Randle turned in a double-double.

Winning their first back-to-back set, the Celtics will reward themselves with a few days off before they host the Bucks at TD Garden Wednesday night.