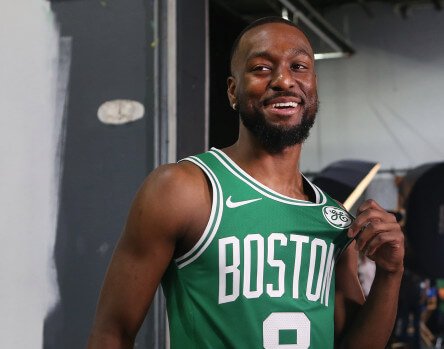 CANTON, MA — All-Star point guard Kemba Walker knows that expectations are set relatively high for him and the Celtics ahead of the 2019-2020 season.

Leading a team that’s coming off of appearances in two of the past three Eastern Conference Finals’ is a challenge that Walker is up for the task for, but also one that’s met with unfamiliarity for the eight-year pro. After spending his entire career as a member of the Hornets, Monday’s Celtics Media Day in Canton had a fresh new feel to it.

“Just different, you know,” Walker said. “This is my ninth media day, first one with a new organization so it’s just different. I just feel like the new kid in school. How when your friends go to a new city or something like that. But it’s cool, I’m looking forward to adjusting, I’m looking forward to getting to know everyone. I’m excited, I think it’s a lot of emotions just all in one.”

The Celtics’ upcoming campaign will be an adjustment for everyone, something that comes with the territory for any team starting the season with a new starting point guard. However, Walker doesn’t feel the pressure because of the vacancy left behind by All-Star Kyrie Irving, and made that clear when he spoke to the media.

“I’m sure there will be expectations because of the organization, I wouldn’t say much (is) about Kyrie,” Walker said. “We have a really good team so there should be expectations and I’m very excited about that. That’s something that I haven’t had much throughout my career so I’m looking forward to try my best to meet the challenge.”

Unlike Irving, Walker certainly doesn’t bring a championship pedigree to the Celtics nor did he come across as a man with all the answers. Instead, Boston’s newest starting point guard addressed his enthusiasm and willingness to lead alongside his new teammates.

Walker spent his summer leading a new group of players before playing in a single game for the Celtics, his experience along with the lessons learned in the FIBA World Cup is something he plans to bring with him this season and instill within his new teammates. It may already be resonating with at least three of them.

After spending months competing alongside guys like Marcus Smart, Jayson Tatum and Jaylen Brown, Walker can’t wait to see how the time in China will translate throughout the regular season.

“You have to take on different roles that you might not like to. That’s something we can bring here.”