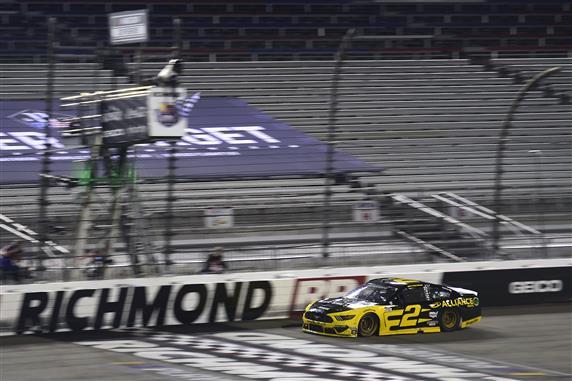 Brad Keselowski won the Federated Auto Parts 400 from Richmond Raceway on Saturday night to lock himself into the second round of the Playoffs.

Keselowski was dominant all night, and led a race-high 192 laps.  Keselowski took the lead for the first time in Stage 2, and he was able to control the race the rest of the way.

Keselowski’s team brought the same car to Richmond that won earlier in the year at New Hampshire, and he said he hopes to take the same car to Phoenix and fight for the Championship.

“I wanted to do a really cool burnout with it, but I want this car for Phoenix; it’s two-for-two,” Keselowski said.  “I don’t want to look too far ahead; we’ve got to get there.”

“If we can get to Phoenix, we’ll be really good.”

Martin Truex Jr. was strong on Saturday, but he wasn’t able to catch Keselowski on the final run, ultimately settling for a second-place finish.

Truex said he didn’t think he was going to run up front after struggling with his car’s handling early in the race.

“Never really got the balance right all night,” Truex said.  “It was slow on the short run early and slow on the long run late.  Somewhere in between we’d be pretty competitive, but we really couldn’t just put it all together.”

“Just solid every week.  Hopefully we can keep putting ourselves in the front and we can win races.”

Next Saturday, the Cup Series heads to Bristol Motor Speedway for the final race in the firsr round of the Playoffs, where four drivers will be eliminated from championship contention.

Austin Dillon, one of the underdogs going into the Playoffs, followed up his runner-up finish at Darlington with a fourth-place at Richmond with one of the fastest cars of the night to put himself 36 points above the cut line.

Dillon said a late-race pit miscue may have cost him a shot at contending with Keselowski for the victory.

“When we came to pit road, we were trying to bring everybody down,” Dillon said.  “I was going to hit the red box, so I had to make another lap.  That cost us three seconds.”

“I hope they keep doubting us.  We’re in a good spot and we’ve got a good round after that.  We’ll go to Bristol and do what we need to do to get to the next round.”