Keselowski Wins at Bristol as Elliott and Logano Falter 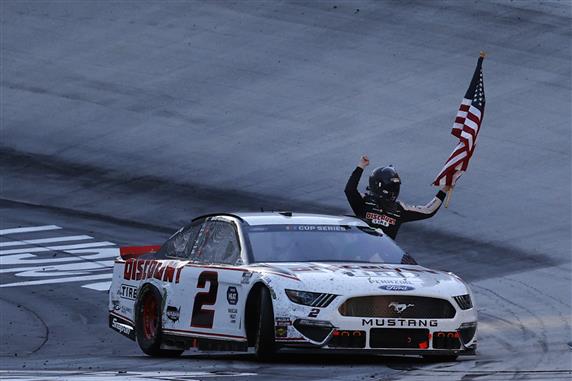 Keselowski started on the pole, but he had to come from behind on the final restart.  Keselowski was running third when Chase Elliott and Joey Logano got together racing for the lead.  After inheriting the lead, Keselowski held off Clint Bowyer to pick up his second race win since NASCAR returned from the Coronavirus shutdown.

Keselowski said the victory was a testament to his team’s attitude throughout the race.

“Things have been going our way, from the luck of the draw on qualifying to the last few laps there,” Keselowski said.  “I’m so happy for the team; this is a never give up effort, and that’s what we’re becoming as a team.”

Keselowski said a late-race pit call helped put him in position to take advantage of the incident between the leaders.

“Right at the end, we came in and took tires on the lefts,” Keselowski said.  “I could see Joey and Chase, they were getting really racy there.  I knew if I just kept my eye open something good might happen, and sure enough it did.”

Elliott led the field to the final restart, but Logano was able to get by with four laps to go.  Elliott drove under Logano racing for the lead, and the two got together and hit the wall.

Elliott said his car got loose under Logano trying to get to victory lane.

“I think I just got loose and got up into him,” Elliott said.  “Trying to get a run underneath him…as soon as I turned off the wall, I had zero chance in making it.”

“I feel like that was my shot.  I hate we both wrecked, but you can’t go back in time now.  I’ll certainly take the blame.”

Logano got out of his car on pit road and had a heated discussion with Elliott after the incident.

Logano said he was upset with the way Elliott handled the wreck.

“He wrecked me; he got loose underneath me,” Logano said.  “The part that’s frustrating is afterwards…I had to force an apology, which to me is childish.”