Kevin Durant and Jayson Tatum both tried to attack mismatches under heavy pressure in the Celtics' win over the Nets. Durant praised the team around Tatum to CLNS Media after. 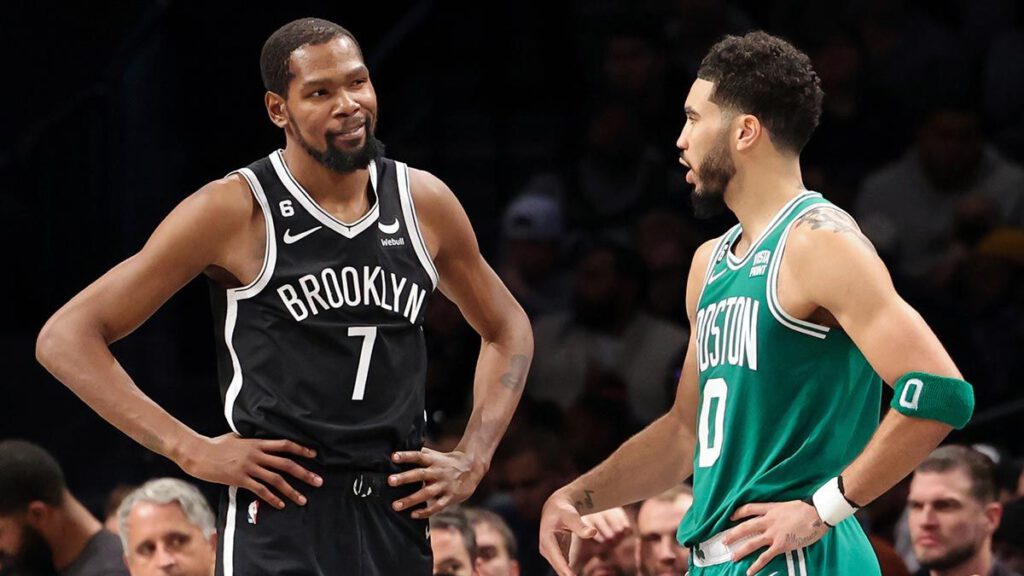 NEW YORK — Jayson Tatum and Kevin Durant trained together at the height of the Jaylen Brown trade rumors in July. An infamous photo by Celtics photographer Brad Hampton showing them side-by-side sparked the imaginations of some fans and triggered the anxieties of others. Tatum questioned the criticism, asking why he wouldn’t want to improve by going against a great player.

The superstar forwards faced off for the first time since those workouts on Sunday, a 103-92 Celtics win where both angled to find mismatches and discarded each other’s coverages. They beat each other with tough fadeaway jumpers that mirrored each other. While Durant faced a range of great defenders who could stand in front of him and force the pass, Tatum played off-ball to find mismatches in the flow of the offense away from his guards.

Both players turned the ball over eight times, but Tatum deferred Brown’s clean play as they combined for 63 points. The Celtics overcame Tatum’s struggles before they turned late defensive stops on Durant into offense.

“(Tatum’s) always been a mature player,” Durant told CLNS Media as he left the game. “I just think that now you’re putting the pieces around him to accentuate what he actually does and compliment what he actually does, and that’s always good for a player, great for a player. He’s stepped into a leadership role, just building his confidence every year and I think, now, you’ve got the team around him to help bring his game out even more.”

Tatum praised his Team USA teammate from the podium shortly after, and noted they’ve continued to talk regularly since winning a gold medal together.

“(Durant) is somebody I’ve gotten really close with,” Tatum said. “Obviously competed against a lot in the playoffs recently. Known since I was in high school, won a gold medal with, worked out with a lot this summer. So somebody that I respect a lot, you know. We talk often. And those matchups always you enjoy. Somebody that has played at a high level, the highest level, for as long as he has. Brings the best out of you. So you always enjoy those matchups with one of the best players to ever play.”

Durant and Kyrie Irving pushed the Nets out to an 11-2 lead with two baskets each in the opening minutes trying to extend success under Jacque Vaughn into a five-game win streak. Joe Mazzulla didn’t call timeout, and the Celtics answered with a 14-0 turnaround initiated by stops at the rim on Irving and Durant.

They turned into a go-ahead three from Brown and another by Tatum following his defense on Durant. Brown took over the offense, hitting five threes to surpass the team-high four that Tatum and Al Horford set in a quarter this season.

Durant tried to attack Malcolm Brogdon and Cam Thomas drove on Sam Hauser at the urging of Vaughn, but both came away empty around the rim. Boston received some fortune when Nic Claxton dropped a two-on-one pass from Durant.

Durant missed his own layup at the rim driving past Grant Williams. He finished the quarter attacking Hauser and Payton Pritchard. Grant scrambled to double on the first play, leading to a Thomas three in rotation.

Durant found Claxton back door when Grant moved to help Pritchard again, and Durant drove inside for a layup attacking Hauser late in the first quarter. The Celtics aimed to rotate on the weak side, Mazzulla said.

“It’s a team effort, Brogdon told CLNS. “We did a lot of hitting, trapping, double-teaming when Kyrie and K.D. would turn their back, and I thought we turned them over enough to really disrupt them.”

Horford stopped Durant midway through the second quarter and his missed jumper fell into TJ Warren’s hands for a put back as the game tightened. Meanwhile, the Celtics turned their attention toward attacking mismatches on the other end after Tatum fell into a 1-for-6 hole and 6-for-24 drought extending back to Friday’s loss to Miami.

Some screening misdirection freed Tatum from Irving and Claxton for an open three that he missed.

Then he saw one fall on a shot-fake against Durant’s closeout to step into a mid-ranger. Again playing off-ball.

Tatum hit a leaner over Durant to push the Celtics ahead 55-48, Durant answered the other way over Tatum, who caught after Seth Curry switched onto him to spin into the post and hit the Nets guard with his fourth foul in three minutes.

Tatum later took a dump-off from Grant at the rim back to the perimeter to drive by Thomas, and the Celtics escaped a contested first half with a 12-point lead.

The same mismatch hunting that landed Curry and Joe Harris in foul trouble hurt the Celtics at times in the second half, but when Tatum attacked in movement, he scored easily on his way to a 29-point night where he shot 10-for-19.

Both teams struggled to score in a 19-13 Nets third quarter win. Durant scored three straight baskets to start, then attacked Derrick White until the shot clock expired. Boston went scoreless for six straight possessions, ending with Grant stealing the ball from Durant and sending Tatum out for a free layup.

Brogdon took over the ball late in the quarter, handing off to Brown to attack O’Neale downhill and get fouled, which led to a Nets technical. Grant stole the ball from Durant again, and Brogdon scored through Harris’ fourth foul to send another Brooklyn shooter out of the game.

Mazzulla stood along the far sideline motioning movement and spacing as he often does, expressing after the game that he wished he could’ve intervened more to pull the Celtics out of offensive stagnancy. Tatum rolled past Durant to the rim after screening for White once Brooklyn pulled back within six in the fourth.

“I think it’s ball movement,” Brogdon said. “I think J.T. and J.B., they draw so much attention, so I think it’s up to the rest of us to really move off the ball, cut screen and really create havoc off the ball so those guys can continue to make plays.”

He screened Durant minutes later and rolled past O’Neale for two more, while Brown scored six late points to reach 34.

“Robert Williams hasn’t been there all year and they’re 19-5,” Durant said post-game. “With Marcus Smart in and out of the lineup, they still got Derrick White and Malcolm Brogdon to bring it, two guys that can pretty much do the same thing he does. They got a deep team.”

“They just made timely plays. The offensive side of the ball, they have a lot of space out there, you’re playing five out, they can easily drive and get to the paint. Playing against a team like that, no matter how much they struggled, 13 points in the third quarter for them, and it always feels like you can be in the game when you’re shooting the three like that and you got space like that. You can get drives to the rim, you can get fouled, some of your plays work more when you’ve got that much space and shooting.”