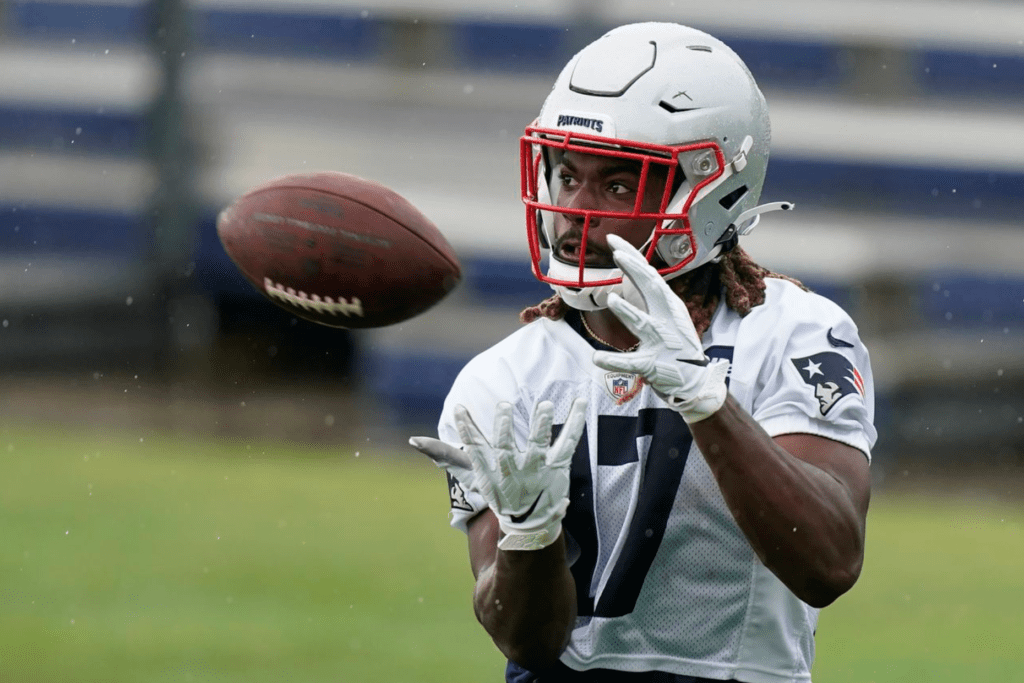 FOXBORO, Mass. – After a dud of a practice on Friday and an off-day on Saturday, the Patriots hit the practice field on Sunday to start their third week of training camp ahead of Thursday’s preseason game against the Washington Football Team.

Now we know there are no real off days in the NFL, and Saturday was no different. We received some unfortunate news as the team announced that linebacker Raekwon McMillan tore his ACL and will be out for the season. McMillan was having a strong start to camp until his injury last week. The team subsequently re-signed Caash Maluia, who they drafted in 2020.

There was also news on the tight end front. The team placed 2020 third round pick Dalton Keene on the injured reserve, ending his 2021 season. They also activated their other 2020 third round tight end draft pick, Devin Asiasi, from the COVID-19 list. It was exciting seeing Asiasi out there for the first time in camp, who will hopefully be able to spell Henry and Smith as a third tight end.

Although Friday was relatively action-less, we got some good solid football today. So without further ado, I’m happy to share with you my training camp observations from Sunday.

First on the field:

Linebacker Akeem Spence was out the earliest today. He worked out with a coach on the pads for quite sometime before anyone else even took the field. Spence wasn’t yet in full pads, so he headed back inside.

Jalen Mills came on first in full pads and headed to the bike to warm up.

The team was back in full pads, which was much needed after their light Friday. Although rain was in the forecast, it mostly held off. Some drizzles came through but it didn’t affect practice.

Center Ted Karras was back for the first time in a while after missing most of camp so far.

Wide receiver Nelson Agholor missed his first practice of training camp. This opened up a significant amount of reps for both N’Keal Harry and Kristian Wilkerson.

Jarrett Stidham showed up on the field in street clothes, rehabbing from back surgery.

Jarrett Stidham is here at practice. Recovering from back surgery. #Patriots

After a rough 7-on-7 period for both signal callers, they redeemed themselves in the following 11-on-11 period. On three straight plays, Newton hit Kristian Wilkerson deep on a go-route, stuck Kendrick Bourne in the numbers on a slant, and then went through his progressions and checked the ball down to James White to avoid being sacked.

Mac Jones followed this up with a solid session, reading through the defense right to left before coming back to Jakobi Meyers on a late dig. Mac’s footwork was noteworthy during this period.

Jones impressed when taking command of a two minute drill during 11’s. Not with his arm strength, but with using his voice to get the team lined up properly and getting the ball into the right guys hands. He set up Quinn Nordin for a long field goal, which he drilled.

With ups and downs for both QB’s, Sunday was a relatively equal day in terms of the starting quarterback competition.

The first big crowd roar today came when rookie Mac Jones took the field. He was the second QB to take the field behind Jake Dolegala.

Rookie Mac Jones trots onto the practice field to a loud roar from fans.

This was quickly followed by Cam Newton, who un-masked and flipped his hair before throwing his helmet on for the day.

In 1 on 1 drills with the receivers and defensive backs, N’Keal Harry drew a loud reaction on a diving catch thrown by Cam Newton over Joejuan Williams. Harry continues to impress this camp. He was 4-0 on his 1-on-1’s.

Player of the day:

Kristian Wilkerson. Number 17 took advantage of a slim wide receiver room today with Nelson Agholor out. He was a ball magnet and was targeted by both Newton and Jones all day.

After practice we were able to speak with both Matthew Slater and N’Keal Harry.

Slater was asked about what he remembers most from the last 14 years of training camp. “Thinking I was going to get cut every day,” he laughs. He added, “I never dreamed in a million years that I would play this long in this league.”

He was also asked about wide receiver N’Keal Harry, who despite requesting a trade this off-season, has impressed so far. Slater told us that he’s, “always enjoyed working with N’Keal. One thing that hasn’t changed is his determination…Glad he’s staying on his grind and ignoring the noise and continuing to get better.”

After practice Harry was asked about his trade request. “Everything that’s going on off the field, that’s really not my concern right now,” he said. He steered clear from anymore trade questions, but mentioned that it’s “great having the fans back out here supporting us.”

The Patriots will be back at it tomorrow, where Evan Lazar will have you covered all day from Foxborough.