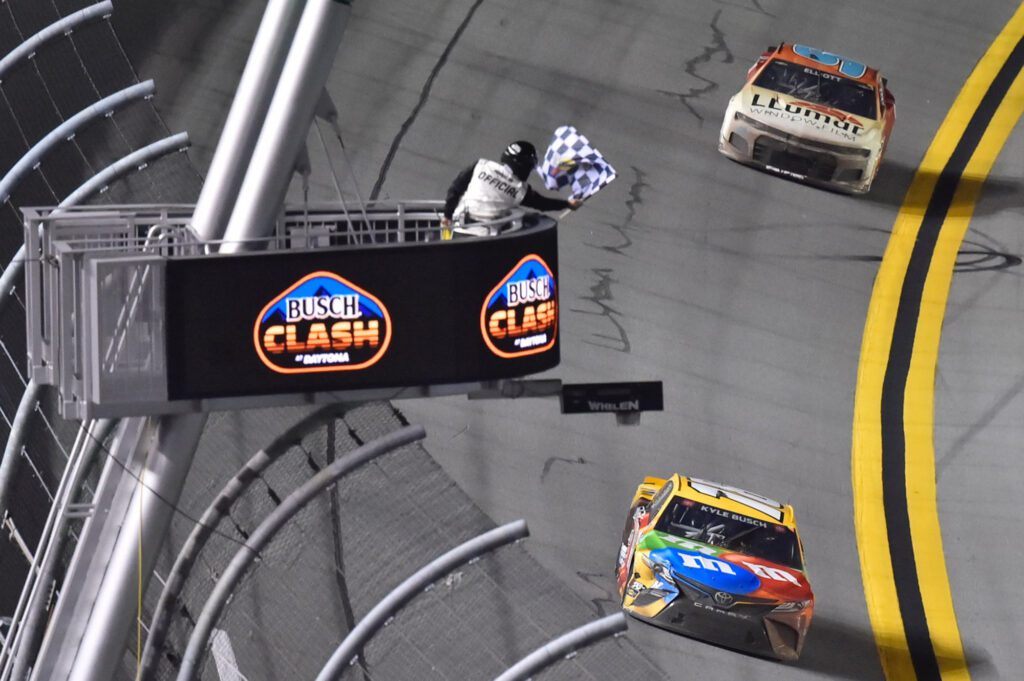 Kyle Busch won the season-opening Busch Clash from Daytona International Speedway on Tuesday night to kick off the 2021 NASCAR season.

The Busch Clash, the customary non-points race that begins NASCAR’s season every year, was run on Daytona’s road course for the first time.

Busch was running a distant third when the field took the white flag, but he was able to take the lead coming out of the final corner after Chase Elliott and Ryan Blaney got together racing for the win.

Busch, in his first race with a new crew chief after a single-win season in 2020, said he hopes the two can continue to grow their relationship as Busch hunts for his third Cup championship.

“Can’t say enough about Ben Beshore and this whole M&M’s team,” Busch said.  “I’ve been through a couple crew chiefs, and it always seems to go well for a little while and then it fizzles out.”

After the COVID pandemic caused NASCAR to change the 2020 schedule multiple times, NASCAR raced on the Daytona road course for the first time last August.  Now officially the second race of the season, Busch said his team looked at this as a test session for the points-paying event in two weeks.

“We had a great car here tonight,” Busch said.  “We worked a lot over the winter time and focusing on what we can do in this race to know what we needed to get better for race number two, coming up in two weeks.”

Elliott and Blaney, known as two of the closest friends in the garage, had fast cars throughout the night but got together racing for the lead in the final chicane coming to the checkered flag.

Elliott said it was a move he had to try with a win in sight.

“I can’t be sorry for going for the win, but certainly didn’t mean to wreck him,” Elliott said.  “Neither one of us won; that’s the big thing.  You’ve got to go for it here in an event like this.”

Blaney, who had fresher tires over the final run, said he had to use up more of his car than he’d hoped while he chased Elliott down in the final laps.

“We were just racing hard and I had a little bit fresher tires there,” Blaney said.  “I tried to protect and drove in the last corner really deep to try to make sure I didn’t get dive-bombed like that.  Learned something for next week…and excited to get to the [Daytona] 500 this Sunday.”