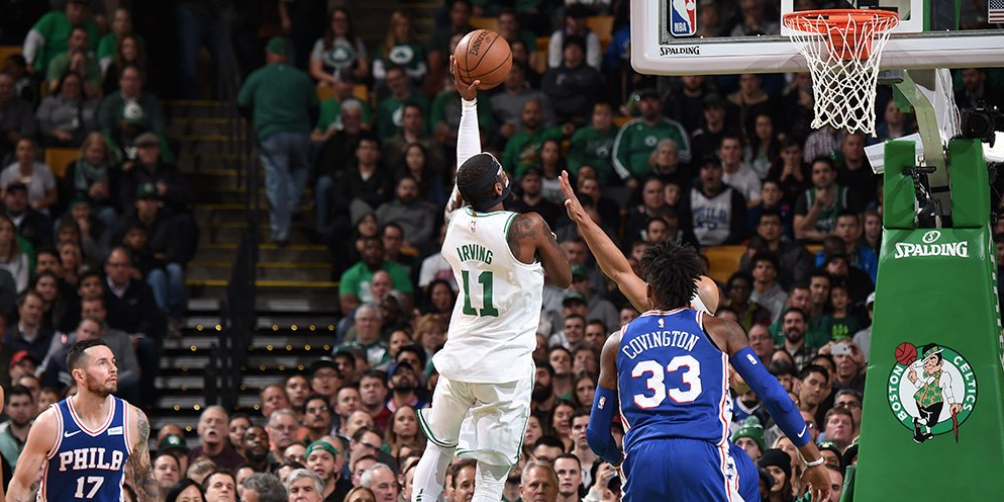 BOSTON — Kyrie Irving and the Celtics weren’t about to show the Sixers any sympathy Thursday night.

Irving scored 20 of his game-high 36 points in the first half and Marcus Morris added 17 off the bench as the Celtics beat the Sixers, 108-97, at TD Garden. The Sixers played the game without the resting starting center Joel Embiid on the second night of a back-to-back. Philadelphia also played the game without T.J. McConnell, who injured his shoulder in Wednesday’s win over the Wizards.

The Celtics (19-4) rebounded from their fourth loss of the season Monday night by beating the Sixers (12-9) for a second time this season. The Celtics beat the Sixers, 112-102, on Oct. 20 for their first win of the season and the first of 16 straight wins. Thanks to Irving, Boston’s biggest weapon on the night was the 3-point shot, connecting on 12-of-29 from beyond the arc.

Boston also did a good job limiting the damage of Ben Simmons. The Sixers young star scored just 15 points and seven assists in 40 minutes. One of the unsung heroes of the game was Boston reserve big Daniel Theis, with four points and eight rebounds in 14 minutes.

How do you stop this? You don’t. pic.twitter.com/5pQIpMgFMY

After the Sixers raced out to a 9-2 lead to start the game, the Celtics, behind the play of Irving, fought back quickly.

Irving connected on four of his first five shots from the floor and the Celtics responded with a 21-9 run to assume early control of the game. Irving scored 11 points in the opening quarter as the Celtics claimed a 28-22 lead after the first quarter.

As they did on Oct. 20 in Philadelphia (when they committed a season-high 19 turnovers), the Celtics still struggled with turnovers, committing five turnovers in the first nine minutes of the game.

One of the highlights of the first half was a screen and roll between Marcus Smart and Horford, with Horford finishing it off with a dunk off a perfect alley-oop pass from Smart.

Oh yeah, we almost forgot… This happened before the halftime buzzer. Sharing is caring in this #SunLifeDunk4Diabetes! pic.twitter.com/mE3gTxjYMm

The turnover bug wasn’t limited to the Celtics as both teams played erratically in the first half. The Celtics powered to leads of 30-22 and 41-34 thanks to hot 3-point shooting. Philly made another run, cutting the Boston lead to 43-41. But thanks to threes from Irving, Horford and Tatum, the Celtics closed the half on an 11-3 run to take a 54-44 halftime lead.

Irving was a one-man wrecking crew in the opening 24 minutes, finishing with 20 points on 7-of-12 shooting, including 3-of-5 from 3-point range.

Again the Celtics seemed in command to start the second half but the Sixers hung tough, with J.J. Redick draining threes and scoring nine points in the first two minutes, cutting the Boston lead to 60-56. Richaun Holmes put-back lay-up and a Timothe Luwawu-Cabarrot three gave the Sixers a 66-65 lead. Dario Saric converted a free throw to cap a 17-5 Philly run.

Marcus Smart hobbled off the court with just 20 seconds left in the third quarter and headed to the locker room with a right ankle injury. He had his ankle re-taped and was back in the game with 10 minutes remaining.

The Celtics kept the Sixers at arms-length in the fourth quarter to post their 19th win in their last 21 tries.

The next time the Celtics and Sixers get together will be in London on Jan. 11.