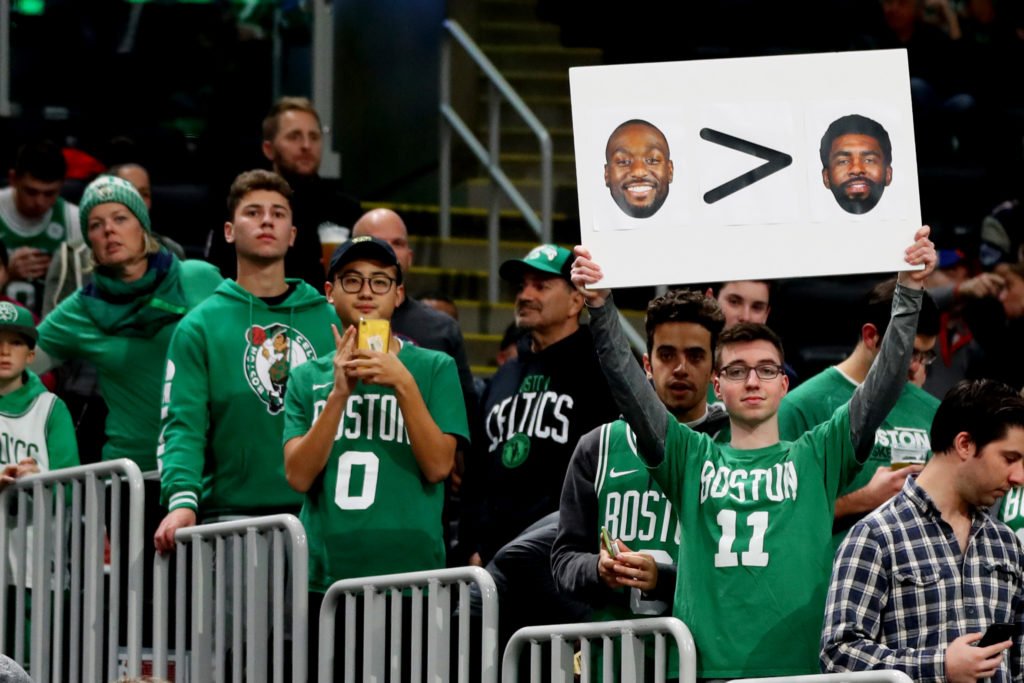 BOSTON, MASSACHUSETTS - NOVEMBER 27: A fan holds a sign with photos of Kyrie Irving and Kemba Walker before the game between the Boston Celtics and the Brooklyn Nets at TD Garden on November 27, 2019 in Boston, Massachusetts. (Photo by Maddie Meyer/Getty Images)
Share
Facebook Twitter Email

Celtics fans at TD Garden didn’t get the chance to see the showdown they had been waiting for since the summer but that didn’t stop the much anticipated drama between them and Kyrie Irving Wednesday night.

Since the day the NBA announced its 2019-20 schedule, fans couldn’t wait for Irving’s return to Boston and when the news broke that Irving was going to skip the trip, fans still entered the arena with signs that mocked the former Celtics point guard and eventually shouted out a plethora of anti-Irving chants.

Evidently, Irving heard them loud and clear. He responded on Instagram, following the 121-110 Celtics win.

He started off the post by saying sports/entertainment will always be ignorant and obtrusive, and that it doesn’t mean much in comparison to what’s going on in the real world.

Irving made strong points throughout his post, real-life issues doesn’t rank above sports on the list of what’s most important. Seeing Irving use terms like “defacing” and “mental health” is showing a vulnerable side of Irving, one we haven’t seen to this extent.

Whether it was the signs of his faced with the word “Coward” attached that were plastered outside TD Garden or the chants, Irving was hurt and this was his way expressing that. Is this what comes with the territory when you’re not just an NBA player but one of the most talented guys the league has to offer? Yes, it’s part of the gig.

Did Celtics fans cross the line Wednesday night? No, the chants were cringe-worthy towards the end, considering Irving isn’t in the building but weren’t necessarily offensive.

By the end, the chants from Celtics fans were repetitive and lazy but that’s to be expected from one of the most passionate fan-bases around. No word on if Irving will be available for the Celtics’ rematch in Brooklyn against the Nets, either way, we certainly haven’t heard the last of Irving’s Instagram post, expect there to be plenty of Thanksgiving leftovers Friday afternoon.