Kyrie Irving wants to Play Kemba Walker 1-on-1: ‘I want that matchup’ 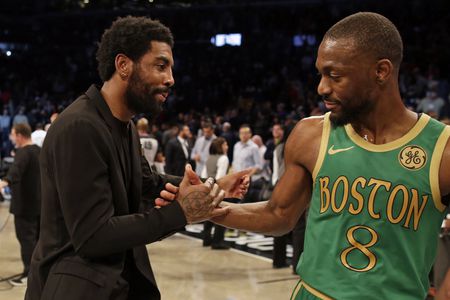 Did Kyrie Irving challenge Celtics All-Star Kemba Walker to a series of 1-on-1 games?

Irving, who joined professional basketball player Darryl “Truck” Bryant on Instagram live over the weekend, was asked to address a rumor of having a desire to face NBA players in a series of 1-on-1 games. Irving, who’s considered by many to have the best handles in the league, said he would love to take on a number of different players, including Walker, who appears to be at the top of Irving’s list.

Irving then went on to praise the Celtics point guard for his talents while adding that he considers Walker a rival of his — someone who brings the best out of him.

“That’s my big bro,” Irving said. “You know we got mutual respect but I know everybody wants to see it — out of New York, New Jersey. Every time we play against each other it’s always a game. He gave us 40, I gave him 40. Back-and-forth, that’s just part of where we grew up.”

Celtics fans would certainly love to see these two go at it. Boston’s newest point guard going toe-to-toe against Irving, who went back on his promise of sticking around passed 2019 before Walker took the reins.
It’s a showdown that sells itself, TV ratings would soar and, most importantly, all would be forgiven for that awful H-O-R-S-E idea.
Click the link below to watch Irving’s clip from the interview:
Boston brooklyn celtics kemba walker Kyrie Irving NBA nets
Share. Facebook Twitter Pinterest LinkedIn WhatsApp Reddit Email