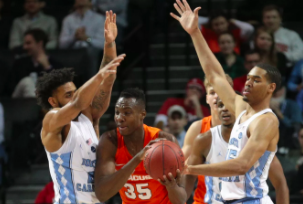 But Syracuse utilized its strengths to create expectations. Even as its deficiencies displayed vividly, hope of March Madness grew through road wins, a top-25 win to close the season and Oshae Brissett’s sensational freshman year. Even though foul trouble to one player alone could clearly derail any hope of SU beating any opponent.

At any given moment Syracuse’s podium, playing five or six players deep at maximum and running isolations for three players who averaged playing an entire game’s worth of minutes could crumble.

On Wednesday against North Carolina, it came crashing down in a 78-59 loss eliminating them from the ACC Tournament.

Paschal Chukwu, the core defensive anchor of this year’s 2-3 zone, picked up three quick fouls in the first half. He’d foul out with 16 minutes remaining in the second half. Sidibe, hobbled and in foul trouble himself, played the brunt of minutes left over.

“Every point we could get in the middle I wanted to put pressure on them to make a good play and keep attacking,” Theo Pinson said. “We got the call, so it was good on our part … having (Chukwu out) the game was huge for us.”

Roy William’s team had seen Chukwu play a few weeks ago, knew he’d contest everything they shot inside at him, and used that to draw him into foul trouble. The defense collapsed, leaving Brissett open to hit five three-pointers, but little for anyone else.

Frank Howard, good on ball-control all season and putting turnover-plagued seasons behind him, threw the ball away seven times and fed UNC’s transition game all night.

“They did a great job of flooding the paint and staying in front of us,” he said. “They’re a great defensive team. They play the ball screen very well, and yeah, just made it difficult for us.”

For him and Tyus Battle, sporting scowls in the post-game press conference, 40 minutes called regularly. That was on Wednesdays and Saturdays, this time Boeheim called for 80 minutes in less than 48 hours.

It was too much, but he had no choice. They had no bodies behind them and only they provided hope of any offensive facilitation.

‘It’s not just the 40 minutes, Boeheim said. “But when … you have to make plays off the dribble, which we really have to do, it takes an extra toll on you.”

They had no post game, he added, he mentioned four perimeter players and a defensive big men. That’s five players. When one went down with fouls, it was always going to be all over for the Orange.

It’s surprising it didn’t happen more often, but somewhat fitting it closed out SU’s tourney run. The team’s greatest limiting factor became its cap on its potential in Brooklyn, and could prevent a bid into March Madness. But as Boeheim said for the second straight day, Syracuse won many games with a top-20 strength of schedule, built a top-50 RPI in the nation and topped two high-tier opponents on the road.

With less, they managed to do more this year than last and definitively have a better resume than last year’s group did. Only, that relation doesn’t matter. Nothing’s in SU’s control now as they return to watch the selection show at the Carmelo Anthony Center on Monday.

“These guys, considering everything, I think they’ve done everything we could ask them to do,” Boeheim finished.

“I can’t fault anything this group has done.”