Cold starts are simply killing the Bengals. Players insist they believe the coaches will figure it out. 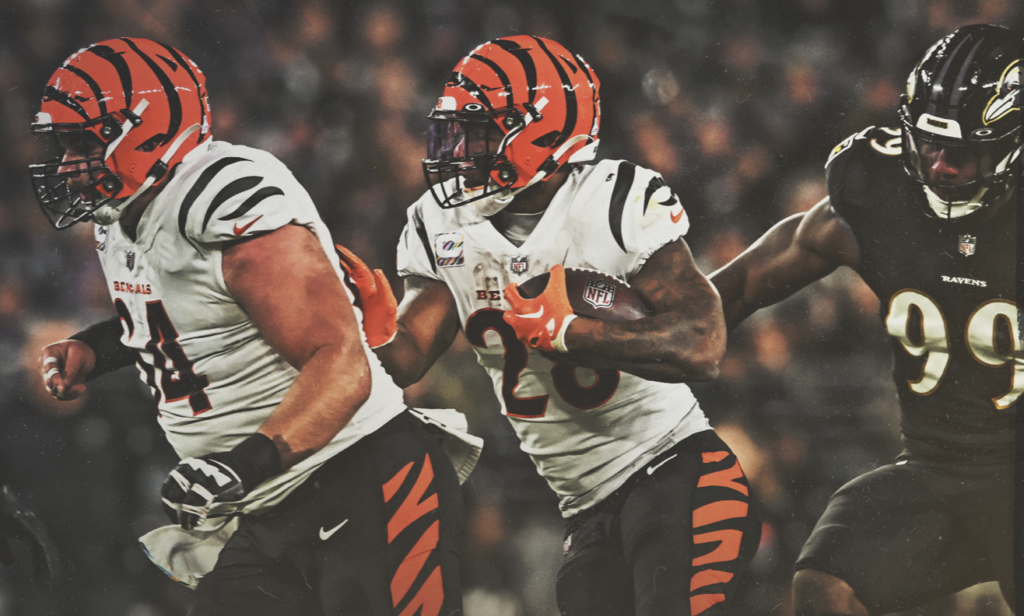 BALTIMORE — It shouldn’t be this difficult to score points for a team with this much talent.

The Bengals have consistently struggled to find ways of putting points on the board early in games and that bugaboo struck again Sunday night for the whole football world to see. That combined with some highly questionable play-calling/execution in a critical low red zone opportunity spelled doom in a 19-17 walkoff loss to the Baltimore Ravens.

The team that features Joe Burrow at quarterback, Joe Mixon at running back, Hayden Hurst at tight end and receivers Ja’Marr Chase, Tyler Boyd and Tee Higgins have not been able to take games by the throat and exert their dominance like championship teams do.

Yes, Higgins was limited to two series Sunday night but there were two things very evident early on. Burrow again didn’t look comfortable in the pocket and didn’t have a lot of space to step up and move around like he was doing on a regular basis last year. And second, when he did have time from the line, he had no answers downfield as he was seeing nothing but high zone and quarters coverage from a Ravens secondary that came in ranked dead last in pass defense.

The first four drives ended in punts. The Bengals had one first down and 22 net yards after four possessions, with the last three ending in three-and-outs.

That is pretty much inexcusable for a team with this much weaponry.

“We got a first down on the first play of the game, and then we probably went three straight three-and-outs if you want to continue to count that drive,” Coach Zac Taylor said. “Again, it was just finding a rhythm on the first two plays. It wasn’t necessarily a feeling-out process. We just couldn’t find a rhythm, and once we got that first first down, really the remainder of the game we moved the ball exactly how we wanted to. Again, we just didn’t start as fast as we wanted to.”

The Bengals looked great the fifth time they had the ball, moving 83 yards in seven plays, highlighted by a 33-yard reception by Mike Thomas, filling in for Tee Higgins. There was a great mix of run and pass, capped off by a 19-yard touchdown by former Raven Hayden Hurst.

The problem with the Bengals offense right now is there is absolutely no sense that one good drive will lead to another. That has to somehow be fixed. Maybe it’s Burrow getting rid of the ball sooner. Maybe it’s scrapping the zone run scheme and going with a power man blocking scheme. Maybe it’s just giving Mixon more space downfield or in the flat. Maybe a seam route or two to Hayden Hurst stretching defenses when they’re playing zone and quarters all over the place is a possibility.

There’s got to be an answer because what we’ve seen over five games is simply not good enough.

Give the Bengals this much credit: They have learned to fight through it remarkably well. Down 17-3 to the Steelers, they roared back to force overtime, only to lose, 23-20, in overtime. Down 17-3 to the Cowboys, they tied the game, 17-17, only to have Brett Maher kick the game-winner at the gun. Sunday night, they somehow took a 17-16 lead with 1:58 left because the Ravens themselves scored only one touchdown.

But a defense that had no margin of error because their offense can’t generate one allowed Lamar Jackson to make just enough plays to set up Justin Tucker’s 43-yard walkoff field goal.

In all three losses, the common denominator has been an abysmal start by the offense.

That leads to desperation. It leads to trying to finesse the ball into the end zone and running plays like the “Philly Special” only to have Joe Burrow covered just long enough for Tyler Boyd to get blown up by Marcus Peters for an 11-yard loss on second down. On fourth down, there was an embarrassing effort at a shovel pass up the middle to Stanley Morgan, only Morgan never got to the ball and it fell helplessly off target in the end zone.

Dominant teams show confidence in the red zone. The Bengals are anything but that this year inside the 10.

"They just made one more play than we did" Joe Mixon #Bengals pic.twitter.com/MdfgxIBp1a

“It’s a really tough structure of the front,” Taylor said. “So, we feel good about some of the stuff we called. Obviously, it didn’t work. We took a sack on a specialty play, and then it didn’t quite go how we wanted to on the shovel (pass) on the fourth-down play. I felt comfortable with our package going in. When it doesn’t work, you wish you did something different.”

Ja’Marr Chase had no 81-yard touchdowns Sunday like he did in Oct. 2021. Sunday night Marcus Peters and the rest of the Ravens secondary made sure of all of their tackles and held him to seven catches on 12 targets for 50 yards, mostly on bubble screens and in-slants over the middle. He was the intended receiver when Joe Burrow didn’t seen Patrick Queen in the middle of the field and picked off Burrow.

“We’ve got a lot of playmakers and we’ve got to learn to play with each other and we’ve got to know how to execute,” Chase told me. “I feel like that’s one of the biggest things we’ve got to work on. We’ve got a whole lot of weapons and not just trick plays, too. Once we utilize all of our weapons the right way, we’re going to be unstoppable.”

After the play, La’el Collins ran off the field frustrated and didn’t want to talk to anyone but Taylor tracked him down and had some words of advice.

"At the end of the day, I'm very confident in everything our coaches do." La'el Collins who told me he still loves playing for Zac Taylor and that this is one of best locker rooms he's been in even after a tough loss. Bengals pic.twitter.com/ph656Jt7HX

“As a team, we’re good, we’re solid,” Mixon told me. “I mean, we’ve got three losses, but we’re going to be straight though. This is one week at a time, and we are just playing the cards that are given to us. Just learn from it. It’s a long season. Our teammates and coaches are going to figure it out. I’ve got all the confidence in the world in them. We’ve got the guys in here that are going to respond, and I look forward to it next week.”

Zac Taylor knows he bears the brunt of fan criticism after another last-second loss Sunday night in which his offense (for which he calls plays) misfired too often.

“We’ve been in a lot of close games, and they’ve come down to the last play of the game,” Taylor said. “As a whole we have to do better.”

Asked Ja'Marr Chase about trick plays and red zone. "We just need to get it figured out. We've got the players" pic.twitter.com/ftUCsGcGTB