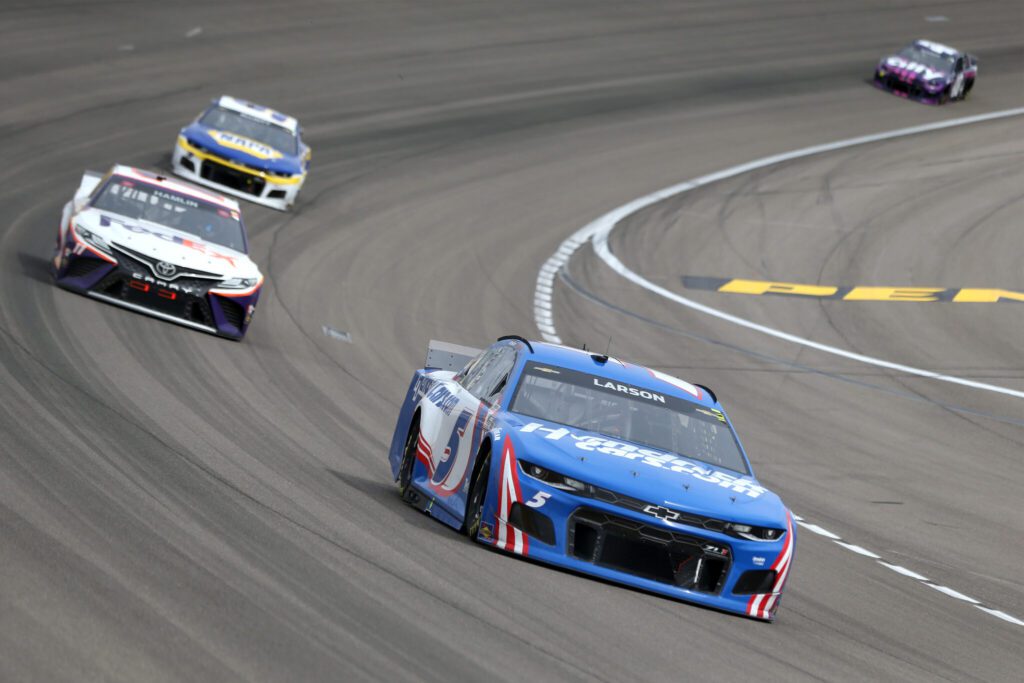 Kyle Larson won the Pennzoil 400 from the Las Vegas Motor Speedway on Sunday afternoon to pick up his first victory with Hendrick Motorsports.

Larson was dominant on Sunday and, along with his other Hendrick teammates Chase Elliott and William Byron, ran up front for most of the race.  Larson led a race-high 103 laps.

After winning in just his fourth start with Hendrick Motorsports, Larson said the victory was special.

“It was such an awesome race car,” Larson said.  “I could go wherever I wanted to; I knew we had a pretty good car once we got single-filed out.  Thank you so much Mr. Hendrick, Jeff Gordon, everybody at Hendrick Motorsports for the amazing opportunity I’ve been gifted.”

Larson returned to the Cup Series in 2021 after being suspended for most of the 2020 season for uttering a racial slur during an iRacing event amidst the COVID shutdown.

Larson said he was thankful to get a win for Rick Hendrick while driving a paint scheme in honor of the team owner’s late son.

“I know this is Rick’s most special paint scheme, for obvious reason, and it’s just an honor for me to be able to drive it,” Larson said.  “Our first time out with this color scheme…this is definitely special.”

Brad Keselowski finished second on Sunday, but he wasn’t able to catch Larson over the final stage.  After closing in following a miscue by Larson before the final pit stop, Keselowski was unable to make the winning pass and saw Larson pull away over the final 30 laps.

Keselowski said Larson’s ability to put the car wherever it needed to go was the difference in the race.

“He was really fast,” Keselowski said.  “He had a lot of speed in all the lanes, which was really impressive.  Usually you have to make a compromise, but they were really good.”

“If Kyle Larson wasn’t here, it would have been a dominant day.”