Lazar: 40 Takeaways From the First Week of Patriots Training Camp 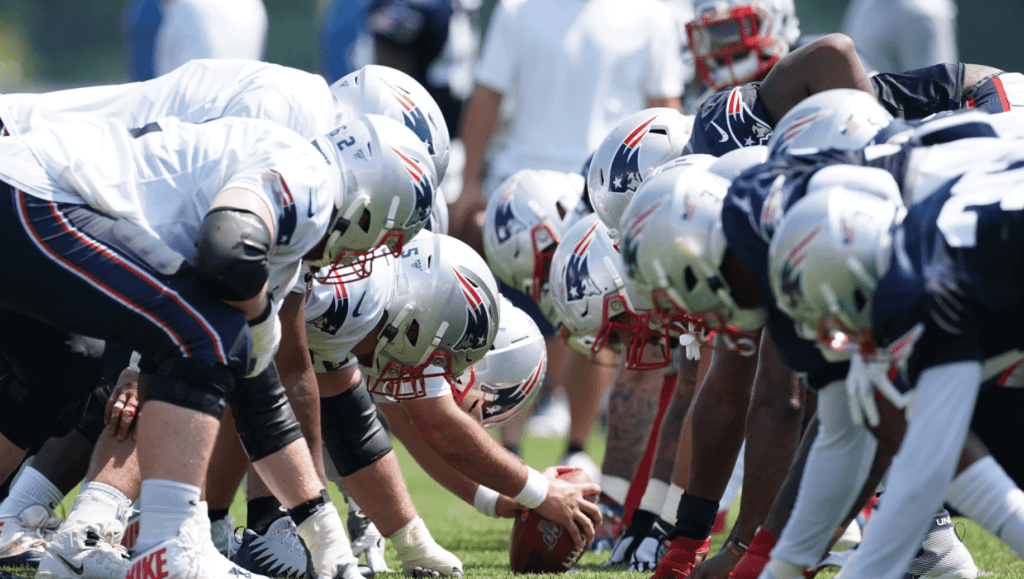 FOXBOROUGH — the Patriots have now gone through eight training camp practices as we turn the page to a week in the Motor City with the Detroit Lions.

On paper, we figured the Patriots defense would pick up where it left off last February in the Super Bowl, and they’ve done just that showing off their depth, versatility and talent.

However, with the strong play of the defense is a sloppy offense that made several mental errors such as drops, penalties and lining up incorrectly that plagued them last week.

The good news is that the Patriots still have 36 days until the Sunday night opener against the Pittsburgh Steelers to clean things up offensively. That, as they say, is why they practice.

With the big picture in mind, here are 40 takeaways from the first week of Patriots camp:

1. Physically, Tom Brady looks great with plenty of zip on his fastball and maybe even a bulkier build aimed to keep his body at peak performance for 16-plus games. As you’d expect, Brady’s chemistry with his new weapons is a work in progress.

2. There’s no doubt that Jarrett Stidham has more arm talent than Brian Hoyer, but there’s an air of professionalism when Hoyer is under center. The offense still runs as it should with Hoyer, and he has made plenty of decent throws to keep his backup job as of now.

3. On Stidham, we knew he had NFL arm strength, but his control of the ball is also impressive. On the whole, he puts it where he wants it to go. From a mental standpoint, he’s starting to get the ball out on time after holding onto it too long earlier in the week. He’s ahead of where I expected coming from such an unconventional offense at Auburn.

4. The Patriots’ coaching staff finally took Sony Michel out of the garage over the last few days, and the now second-year running back looks great. Michel has a little bit more wiggle and caught five passes from Tom Brady in the last three practices. The second-year running back ran routes out of the backfield and motioned out wide a few times as well. Hopefully, all these positive reps will lead to more production in the passing game this season.

5. Rookie running back Damien Harris is trending in the right direction. He has picked up on his run reads quickly and gets out of the backfield as a receiver at a nice pace.

6. Top pick N’Keal Harry had his best day of camp on Thursday with two excellent downfield grabs. His footwork remains a bigger concern to me than the mental errors. He’s struggling to create separation because he has a tendency to put his weight on his back foot before exploding forward on his releases and he’s losing ground into his horizontal cuts. On a positive note, there are small improvements with his press releases and the contested catches are nice. Physically, he looks like a first-round pick, but he needs a lot of technique work.

7. Phillip Dorsett is having a solid start to camp challenging the Pats secondary with his speed. Things are looking up for those that want to see him have a more significant role in the offense. We could also see Dorsett returning kicks this season.

8. Realistically, Maurice Harris will be a nice complementary option. With that said, those are always valuable, and the chemistry is brewing between Brady and Harris. He’s smart, can move around the formation and has excellent hands.

9. We’ll see how he looks in the games, but my eye test says Braxton Berrios has more juice in his routes than he did as a rookie. He shook Jon Jones on a crossing route over the weekend to haul in his first catch from Brady in 11-on-11s and ran with the starters the last few days as the top slot receiver. He’s also fielding punts and kickoffs.

10. Jakobi Meyers is the best bet to extend the 15-year UDFA streak. He started mixing in with the starters as an outside receiver on Thursday and Friday. He has a large catch radius and is picking up on things quickly, maybe due to his QB background. A lot like Harris, it doesn’t take an elite separator to win with Brady, they just need to be in the right place at the right time.

11. Danny Etling and Gunner Olzenski are both fun camp storylines, but that’s all it is for now.

12. Ben Watson has done exactly what I expected so far bringing a reliable veteran option to the table. He still has some chemistry with Brady and has made some nice plays in the passing game, including a few catches up the seam.

13. Matt LaCosse is the early leader for TE1 while Watson serves his suspension. He has some vertical speed to stretch the seam, but there’s work to be done as a run blocker.

14. Stephen Anderson might have a future as a move tight end or jumbo wide receiver type. If he continues to play well through August, he’s going to make the team out of camp.

15. It’s too early to tell if Ryan Izzo or Andrew Beck can give this team anything this season, but early returns suggest that both are practice squaders.

16. Isaiah Wynn is trending upwards after a very active Friday practice where he participated in non-padded competitive 11-on-11s for the first time in camp. Wynn spoke to the media after the session and reiterated that he’s close to a full go. Wynn’s footwork and foot speed are exceptional for such a young player, giving him the athleticism to play left tackle even if he doesn’t have ideal size for the position, and he has a thick upper body that generates a lot of power.

17. Joe Thuney is about to become a wealthy man either with the Patriots or elsewhere. If he reaches free agency after playing some left tackle, he’s going to be among the NFL’s highest-paid lineman.

18. We know about the three starters on the interior, but Ted Karras continues to impress me as the top backup. If Thuney has to kick outside, Karras is the favorite to replace him at left guard if they don’t bump Wynn inside.

19. Dan Skipper could go from ten career snaps in the NFL to starting left tackle for the Patriots. He has the foot speed to play tackle, but Scar needs to work his magic. Skipper’s technique, especially his ability to bend and leverage blocks, needs a lot of work.

20. We should all be excited about Michael Bennett in New England. Belichick made him work for his snaps since he returned from his excused absence to start camp, but he’s going to be a big part of this defense in 2019.

21. Mike Pennel is an absolute force in the middle of the Pats defensive line. He’s tough to move in the running game.

22. Rookie Chase Winovich is converting from a hand in the dirt defensive end to more a stand-up edge rusher. He has flashed a skill set that will fill that role well, and he’s living up to his reputation getting after it on every rep.

23. The Patriots featured a heavy dose of three-man defensive lines in the first week of practice, and Danny Shelton is in the mix for snaps as a traditional nose tackle. In their base 3-4 or 3-3-5 defense, it was either Pennel or Shelton on the nose with the starters.

24. Derek Rivers had his moments during the first week. He’s shown a wider variety of pass rush moves in one-on-ones and rotated in with the top third-down unit.

25. If these eight practices are any indication, I will be eating crow on Jamie Collins. He looks great in the middle of the Pats defense, and the coaching staff is saying nothing but good things about him.

26. Dont’a Hightower is in great shape and is moving extremely well out there. He is in his usual strong side linebacker spot in the starting defense. Kyle Van Noy looks ready too.

27. It feels like the Patriots have an extra body at linebacker as Ja’Whaun Bentley, Jamie Collins and Elandon Roberts play similar roles. But if they’re going with a 3-4 base, they’ll need the depth at that position.

28. Stephon Gilmore is a lot of fun to watch at practice. His patience and ability to stick all kinds of receivers are unmatched. He has overwhelmed every Pats receiver so far.

29. JC Jackson and Jason McCourty continue to rotate at the second outside cornerback spot opposite Gilmore, but Jackson is starting to separate himself. Jackson’s physicality in man coverage is suffocating, he is improving in zone coverage and his ball skills are still excellent.

30. Jon Jones might’ve been the best player on the field during the first week of practice. Working out of the slot, Jones leads the team in PBUs through one week and is all over these Pats receivers. He’s playing too well right now to think about trading him unless you’re getting something significant in return.

31. Second-round pick Joejuan Williams had a rough start to camp, but he’s starting to trend in the right direction. He needs to get his hands on receivers quickly to keep up, but as long as the Pats are careful with matchups, Williams is okay.

33. The Patriots continue to work Obi Melifonwu in with the starters as they try to find a role for him on this team. Melifonwu has the athletic ability to cover tight ends and made a great interception last weekend on a Brian Hoyer pass intended for Ben Watson. The numbers make it tough, but at only 25 years old, it would be nice to have a young project at safety.

34. Surprisingly, career special teamer Terrence Brooks saw his fair share of reps as a box safety with the starting defense. It’s early, but Brooks is trying out as the de facto fourth linebacker in the Pats’ base 3-4 defense.

35. The punter battle between Ryan Allen and fifth-round pick Jake Bailey is very close. Bailey has the better leg, booming punts with over five seconds of hang time, but Allen is more consistent.

36. Matthew Slater’s practice routine is fascinating. He works exclusively on special teams throughout practice, even during team and positional drills when the rest of his teammates break off into other things. Most of the time, Slater is working on techniques he’ll use as a gunner on the punt team.

37. Here are the players that returned punts and kicks during the first week of practice:

38. Here’s Devin McCourty on Bill Belichick’s involvement with the defense this year and replacing Brian Flores: “Since I’ve been here, Bill’s always very heavily involved with offense, defense and special teams. He’s never scared to let you know exactly how he feels on what’s going on, so he’s definitely been involved with all the things we’ve done. But I think it’s been really a group of guys, whether it’s [Jerod] Mayo, Mike [Pellegrino], Steve [Belichick], even [Bob] Fraser’s a new guy coming. I think it’s really been a group effort this year, going from Matty P [Matt Patricia] to Flo [Brian Flores] to now, it’s everyone kind of being involved.”

39. Jerod Mayo has already made an impression on the players. He offers a unique perspective as someone that has been in their shoes.

40. The Pats had some physical periods of team drills in their first four padded practices, but I’m hoping for some more contact, especially in the running game, during joint practices over the next two weeks.