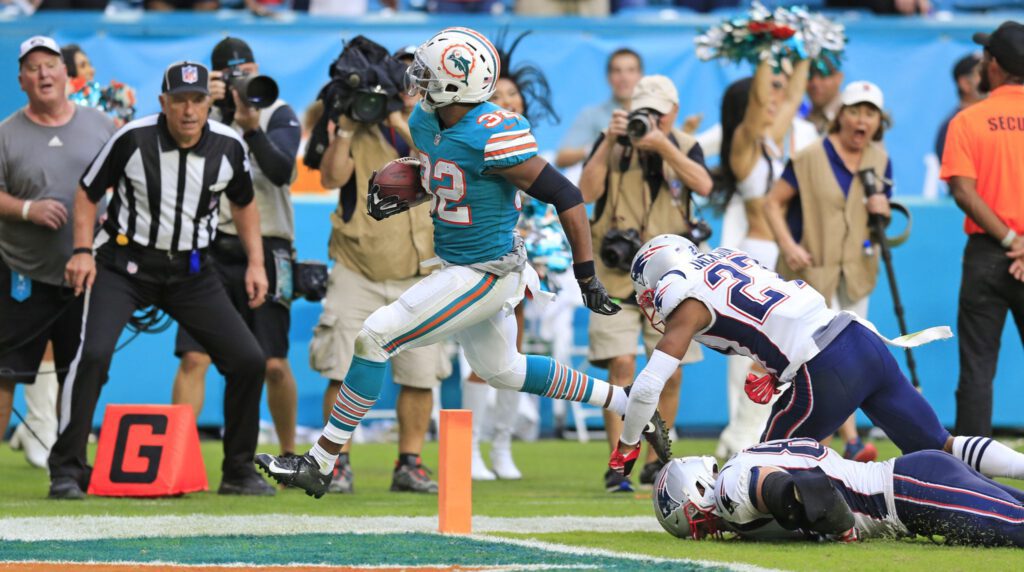 Below are a variety of advanced stats from the Patriots’ stunning 34-33 loss to the Miami Dolphins in Week 14.

Although the Patriots offense had some critical mental errors, quarterback Tom Brady had arguably his best day of the season throwing the football.

Brady was in complete control of the ball both in terms of velocity and placement on the vast majority of this throws and had some extra zip on passes down the field on Sunday.

As we’ve grown accustomed to over the last 18 years, Brady’s primary area of attack was between the numbers.

On throws to the middle of the field, Brady was 16 for 20 for 222 yards, a touchdown, and a 129.6 passer rating and his best throw of the day came on a touchdown pass up the seam to offensive weapon Cordarrelle Patterson.

But Brady was also accurate on most of his throws outside the numbers, including this dime to Julian Edelman.

On the play, the Dolphins get good pressure off the edges, but Brady was able to step up in the pocket while keeping a wide base and delivers a strike on an out route to Edelman along the sideline. Brady’s footwork and pocket movement on this throw were vintage number 12.

In the time to throw department, Brady came in a tick faster than his season average at 2.30 seconds.

Through 14 weeks, Brady’s time to throw of 2.41 seconds is the third-fasted in the NFL (min. 50 percent of teams drop-backs).

The Patriots’ offensive line struggled mightily in the running game this week, but they handled themselves well against a good Miami pass rush that gave them problems the first time around.

In all, Brady was pressured on 25.6 percent of his dropbacks on Sunday, which is a noticeable improvement from Miami’s 37.1 pressure rate back in Week 4.

Brown had plenty of issues in the running game, but he was able to hold Quinn in check this time around only allowing two pressures to the Miami pass rusher.

Furthermore, Dolphins five-time Pro Bowler Cameron Wake was held to three hurries on the afternoon by right tackle Marcus Cannon, but one of those hurries loomed large on a misfire by Brady to a wide-open Chris Hogan in the end zone before the half.

In a bit of a rare occurrence, Brady only targeted two players out of the slot on Sunday afternoon.

However, both wide receiver Julian Edelman (63 yards) and tight end Rob Gronkowski (55 yards) were highly productive on their routes from inside the formation.

Here, Edelman introduced Dolphins rookie Minkah Fitzpatrick to his ridiculous route running ability early on in the game. Edelman wins this route in his stem and at the top of the pattern. First, he uses an inside release to sell Fitzpatrick on an in-breaking route such as a slant, dig, or shallow crosser. Then, Edelman takes a hard jab step outside of his frame with his inside foot combined with a shoulder/head lean to further sell the inside release, and then finishes at the top of the route by subtly following through with his right hand to usher Fitzpatrick in the wrong direction while he explodes toward the sideline out of his break.

Edelman’s second-half performance, like most of the offense, left something to be desired, but his route running skill was on full display in the first half.

If you’re looking for a silver lining from a poor effort by the Patriots defense, it’s the pass rush.

Once again, the Patriots were able to beat up on the Miami offensive line pressuring Dolphins quarterback Ryan Tannehill on 43.5 percent of his drop-backs to go along with five sacks (one on Brock Osweiler).

Leading the way, of course, was edge rusher Trey Flowers with a game-high five total pressures, but the Patriots also got contributions from linebackers Dont’a Hightower and John Simon as well as defensive tackle Adam Butler who had a team-high 90.8 grade according to Pro Football Focus.

The Patriots’ defensive front continued to execute stunts or games at an extremely high level and got home with those schemes many times on Sunday.

On his second-quarter sack, Trey Flowers came free on the rush thanks to some great penetration by Kyle Van Noy and Adam Butler on the slant rush as apart of the stunt scheme. As you can see, Van Noy and Butler attack the center and right guard on an angle deep into the backfield, which allows Flowers to wrap around them to take down Osweiler. Also, notice Simon closes from the other side after he penetrates on a T/E stunt with Adrian Clayborn.

The Dolphins offensive line, as shown by the play above, had trouble all afternoon picking up the Patriots’ stunts, and the Pats also got home on a few of their blitzes from off the line of scrimmage.

Here, the Patriots send linebacker Dont’a Hightower on a “hug” blitz for his first sack of the season. After Tannehill’s 13-yard run on the Miami opening drive, the Patriots started to use Hightower as a spy on Tannehill, which led to this thunderous sack. Hightower delays his blitz, making it look like he’s spying the quarterback, and then hugs around the rush to get a free run at Tannehill in the pocket.

However, as you already know, the Patriots’ run defense was exposed by a Dolphins offense not known for its rushing attack, leaving the defensive front with a mixed bag like most of the team.

If you take the game-winning play out, the Patriots only allowed Tannehill to pass for 196 yards on Sunday.

But the issue for the New England secondary was that those 196 yards came on only 18 attempts, meaning they allowed a lackluster 10.9 yards per attempt to the Dolphins quarterback.

In other words, the coverage stats don’t look that bad for the Patriots defense, but they gave up chunk play after chunk play in the secondary when the Dolphins did go to the air.

Most notably, Patriots number two corner, Jason McCourty, struggled to keep up with the speedy Kenny Stills who had eight grabs for 135 yards and a touchdown, and ultimately got McCourty demoted.

The Dolphins took advantage of Stills’ speed by sending the receiver on intermediate and deep crossing patterns against the Patriots’ man and single-high zone coverages.

On this 22-yard gain to Stills, the Dolphins ran a Yankee concept with Stills crossing underneath a post pattern by wide receiver Brice Butler. The Patriots are in man coverage on the play, which leaves McCourty chasing Stills across the field. McCourty doesn’t get his hands on Stills at the line of scrimmage, and the Miami wideout runs right by him as a result.

After delivering a masterful performance against the Minnesota Vikings last week, the Patriots defense took a step back, especially in the passing game relative to what they did against Minnesota.

And as a result, for just the second time in the Belichick era, the Patriots allowed over nine yards per play (9.2) in a game.