The Patriots' young cornerback is a star on the rise in Bill Belichick's defense. 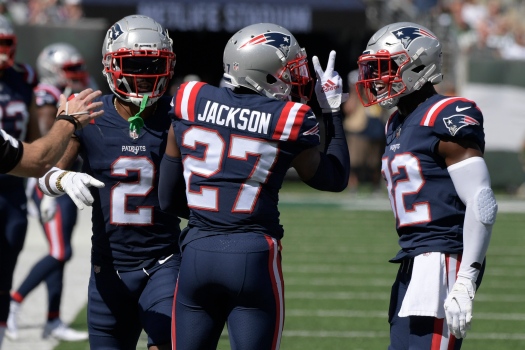 Following the Patriots’ move to trade star cornerback Stephon Gilmore to the Carolina Panthers on Wednesday, the next logical step is extending rising star J.C. Jackson.

Jackson is playing on a one-year restricted free agent tender worth $3.38 million this season. The 25-year-old is an ascending player who has an NFL-best 19 interceptions since entering the league as an undrafted free agent in 2018, tied with Miami’s Xavien Howard for the top spot.

Along with excellent ball-hawking skills, Jackson plays a physical brand of press-man coverage that fits the Pats’ mold at cornerback to a tee making a long-term extension a no-brainer.

By all accounts, Jackson’s work ethic is terrific. Despite making well-below market value on his RFA tender, he participated in voluntary workouts in the spring and was a full-go at camp in the summer.

“What J.C. did a great job of when he came in here, had great skills, great ball skills. Obviously, super talented. But really latching on with the older guys,” Patriots captain Devin McCourty told CLNS Media.

“With Gilly (Stephon Gilmore), with JMac (Jason McCourty), with JJones (Jon Jones) and learning all the different things they did well and putting it all together. I think you put together what he has learned from those guys with his raw talent and ability, he’s been able to produce at a high level. It’s been fun to watch.”

It’s fair to point out that a chunk of Jackson’s favorable metrics came when Gilmore was on the opposition’s top wide receiver, and his five-game CB1 audition in 2020 wasn’t good.

But during the first month of this season, Jackson was again elevated to the top cornerback spot and is starting to grow in that role with more experience against number one receivers. 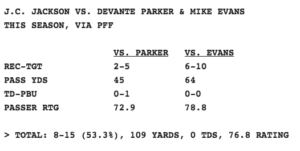 In matchups with the Dolphins’ DeVante Parker and Tampa Bay wideout Mike Evans, Jackson’s coverage stats are far better than his performances against number one receivers a year ago.

At only 25-years-old, Jackson is still developing as a player, and there are signs of improvement. In his battle with Evans last week, Jackson was highly competitive and only allowed 6.4 yards per target. He was excellent in press-man situations and played to his help beautifully.

Jackson executes a trail technique perfectly on his pass breakup in the first half. Knowing he has post-safety help in the middle of the field, Jackson rides Evans’s outside hip, allowing him to cover underneath routes and patterns to the sideline. When Evans stops his route down on a vertical stem, Jackson is in a great position to break up the pass.

Jackson was in phase on several other coverage snaps against Evans and nicely cycled through aggressive jams at the line and a soft press technique to mirror Evans’s routes.

The Pats’ young corner isn’t perfect in coverage. Mainly, he has issues anticipating and sticking with receivers on in-breaking routes, which is where Evans and Parker hurt him the most.

But there’s something to be said for sacrificing the underneath stuff to protect against the big plays, and Jackson isn’t a finished product. Remember, Gilmore had issues too when he signed with the Pats at age 27.

Furthermore, we’ve seen Belichick’s coverage system without a true number one corner. The Pats consistently rank in the top-five in man coverage percentage and shadow receivers almost every week. Even if Jackson has flaws, he gives them a secure option in that number one role.

The Pats can franchise tag Jackson next offseason, but Gilmore’s original deal adjusted for the 2022 league cap would pay him in the $16-17 million per year range (or 8% of the cap) is one that the team should make if Jackson plays ball. Belichick was reluctant to pay top-dollar for a 31-year-old Gilmore, but Jackson six years younger.

After committing to Jackson, Belichick can restock the cornerback group on the fly with Jackson as an acceptable answer for assignments against star receivers while adding reinforcements through the draft and free agency.

Second-guessing Belichick for failing to maximize the Stephon Gilmore asset is a fair critique after the team passed on several trade offers in the 2020 season. According to a league source, a team offered the Patriots a second-round pick for Gilmore around the 2020 draft.

A rebuilding team that lost the greatest quarterback of all time missed the window to receive the biggest return in a deal for Gilmore.

There’s no going back to trade Gilmore for the best possible value. But they can secure a major piece of their defense of the future by reaching an agreement on an extension for Jackson.