Lazar: Alabama Quarterback Mac Jones is an Enticing Prospect for the Patriots 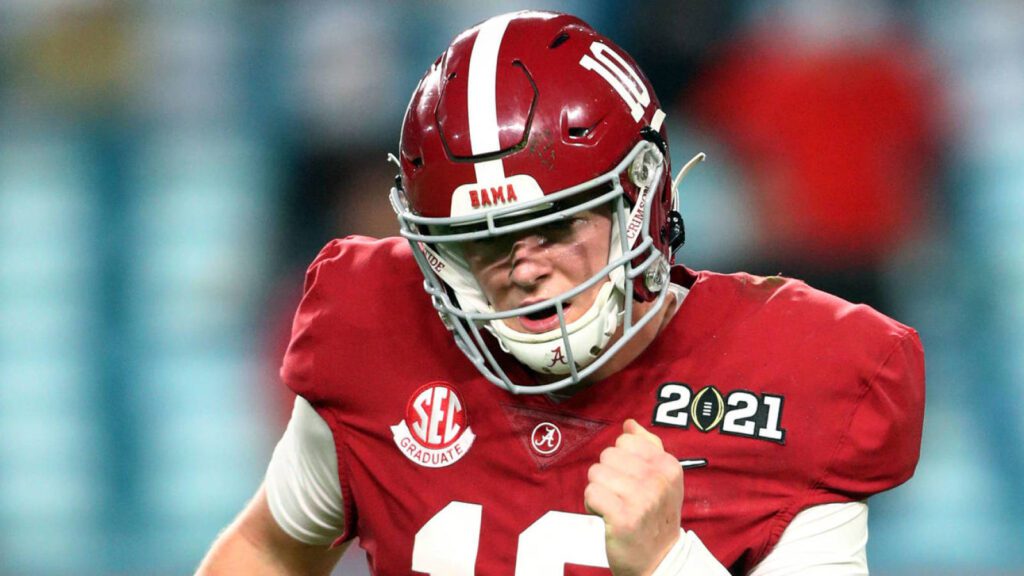 The search for the next franchise quarterback in New England is on, and Bill Belichick’s longtime confidante might have the man for the job.

Holding a 35-17 lead, Jones’s stats at the half were impressive if it was a full game: 25-of-30 for 342 yards and four touchdowns in two quarters against Ohio State’s defense.

Those video game numbers became the standard for Jones and Alabama’s offense this season.

The redshirt junior was the highest-graded power-five quarterback by Pro Football Focus, had the highest percentage of catchable throws, and led the nation in ESPN’s QBR metric.

With Jones, a significant part of his evaluation is weighing the impact of his supporting cast; how much of it was Jones versus how much credit goes to his teammates?

Alabama’s offensive line has several NFL prospects and won the Joe Moore Award as the best offensive line in college football. Jones’s top target, Devonta Smith, won the Heisman Trophy, and he threw to two first-rounders for most of the season, adding Jaylen Waddle into the mix.

There is no shortage of talent around Jones in the Alabama offense, which is a factor in his NFL outlook. In all likelihood, he’ll be in a worse setup as an NFL player than he was in college.

Still, he’s far from the first prospect that benefited from a great supporting cast.

One of Burrow’s top targets, Justin Jefferson, was outstanding in his rookie season with the Minnesota Vikings, and LSU wideout Ja’Marr Chase will be a top 15 pick in April’s draft.

The difference between Burrow and Jones is that the Alabama product doesn’t necessarily “wow” you with his physical tools, such as arm talent or athleticism.

Although Jones throws with great touch and accuracy, his arm strength is only pedestrian, and he’ll sometimes struggle to throw with the necessary velocity when he can’t set his feet.

There’s plenty to like about Jones for the Patriots, though. He’s a fast processor with a quick release, makes anticipatory passes, throws a decent deep ball, and runs an NFL passing system at age 22. In terms of process, Jones is very efficient.

After reviewing his tape culminating in Monday night’s victory in the National Championship Game, here’s a breakdown of what makes Mac Jones an enticing prospect for New England:

The area of Jones’s game that will translate nicely into the Patriots’ offense is his ball placement and timing on throws under 20 yards. He can throw deep too, but he’s at his best here.

Alabama’s offense through run-pass options, motion, and empty sets gave its receivers plenty of opportunities to pick up yards after the catch, with Jones leading receivers into YAC mode.

Here, Smith comes in motion to get the receivers to Jones’s left into a two-receiver stack alignment. Tennessee is playing the stack with inside-out rules, meaning the inside defender takes the first inside release, and the outside corner takes the first outside release. Alabama clears out the sideline with a vertical route, and the switch release at the line gets Slade Bolden favorable leverage against an inside defender. Jones makes the leverage-based throw with anticipation, releasing the ball before Bolden breaks, and places it perfectly to lead Bolden into YAC.

In this play, the Crimson Tide uses play-action to suck up the second level of the defense. Jones then drops the throw in the bucket to Jaylen Waddle on the “burst” corner route putting it over the dropping safety and hits Waddle in-stride so he can pick up extra yards after the catch.

Then, Alabama takes advantage of Jones’s accuracy on RPOs and in third-down situations.

This time, Alabama goes to an empty formation on third down. Sarkisian designs a rub or pick by the inside slot receiver for the outside slot on the slant, and Jones hits Metchie in-stride to move the chains.

Later on that drive, Alabama ran an RPO slant concept where Jones read the backside linebacker. When the linebacker steps up to play the run, Jones puts the ball low and away from the defender to make sure the corner can’t knock the pass away at the catch point.

Here, the middle-read route working across the field to his right clears out the coverage and opens the dig route. Jones knows he has the dig but needs to aggressively step up in the pocket to find space to set and throw. He splits the two rushers collapsing the pocket and rifles a pass purposely behind the receiver to lead him away from the oncoming defender.

Jones has excellent balance and timing in the passing game with a typically clean throwing base, which leads to consistent accuracy on short and intermediate passes.

At its peak, the Patriots’ offense lives on those types of throws, and Jones certainly can hit them.

During the ESPN broadcast of the national championship game, color analyst Kirk Herbstreit mentioned that Sarkisian credited Jones for having “fast eyes” as a quick processor.

The evidence of Sarkisian’s comments is there on tape, as Jones quickly gets through a progression and checks the ball down in ample time.

In this play, Alabama is trying to take a shot by stressing the deep coverage with three vertical routes. First, they have a deep over and post route, putting the deep safety in conflict. Then, they send the running back on a wheel route out of the backfield. The Georgia defense uses a combination coverage to stay over the top on all the deep patterns, but Jones doesn’t panic. He first checks the safeties in the middle of the field and cancels out the over/post combination. The Alabama QB then works to the running back wheel route and sees a linebacker shading over there. With all of his deep options covered, Jones hits the tight end filling in underneath.

Another way that Jones’s processing speed shows itself is how quickly he gets to check downs.

Getting to check-downs in a hurry gives his backs and underneath receivers time to elude tacklers and pick up yards after the catch.

Here, Alabama puts Waddle in the backfield to get him into space. As the defense falls into coverage, nobody takes Waddle underneath after the vertical route clears out the sideline. Jones quickly gets rid of the ball to his speedy wideout, and Waddle walks to a first down.

Although other prospects have better physical tools, Jones is near the top of the class in terms of mental processing and progression speed.

Justin Fields is the second most accurate deep ball passer in the nation this year, and Mac Jones isn't far behind pic.twitter.com/29MNPSPe90

Jones was only accurate on 66.7% of his deep passes, but he still threw well enough over 20 yards to supplement consistent short and intermediate throws with timely deep shots.

Plus, Jones’s timing and touch come into play on deep throws as much as shorter passes.

Alabama aligns Smith in the number three spot as the inside slot receiver here. With the Buckeyes in cover-three mable, Jones identifies the zone coverage and recognizes that the weak hook player (linebacker Tuf Borland) is responsible for carrying number three vertically. Say what you want about the coverage call, but Jones sees it quickly and puts the ball over Borland to lead Smith into the end zone.

Deep passes are littered all over the tape for Jones in the Alabama offense.

In this play, the Georgia defense sends the boundary corner on a blitz, and the deep safety to Jones’s right rotates over to take the wideout in man coverage. Jones recognizes the blitz after the snap and catches the deep safety flat-footed. Jones releases the ball before his receiver clears the safety and places it perfectly for a touchdown.

Although arm strength matters, timing on deep passes is paramount to success as a throw that’s a little too late gives the defenders a chance to recover and contest at the catch point, even if there’s separation.

In his 2020 tape, Jones consistently threw with excellent timing and touch on deep passes.

The last piece of the puzzle for Jones is where he will go in the draft? His accuracy within 20 yards and overall process is excellent. But he’s capped ceiling-wise.

Other quarterbacks, such as the consensus top four (Lawrence, Fields, Wilson, Lance), are better athletes with stronger arms than Jones.

On top of that, there’s the whole supporting cast issue with Jones that we discussed earlier.

The Patriots have plenty of needs on both sides of the ball, including adding skill talent around the quarterback that will set whoever is under center up for future success.

Where things are now for New England’s pass-catchers, Jones, like Newton, will struggle to reach his peak if Bill Belichick doesn’t upgrade the pass-catchers significantly.

Both because of his somewhat limited upside and needs in other areas, selecting Jones with the 15th overall pick might be a bit of a reach. Still, he won’t last long with first-round traits.

The Patriots’ ideal scenario is selecting the best player available with their first pick of the draft and then finding a way to get Jones by trading back into the first round if necessary.

However, with no present or future on the roster, Belichick isn’t in a position to pass on draftable talent at the quarterback position. If he likes Jones, he should go get his guy, and early.