Lazar: Antonio Brown Was Too Good To Pass On For Patriots 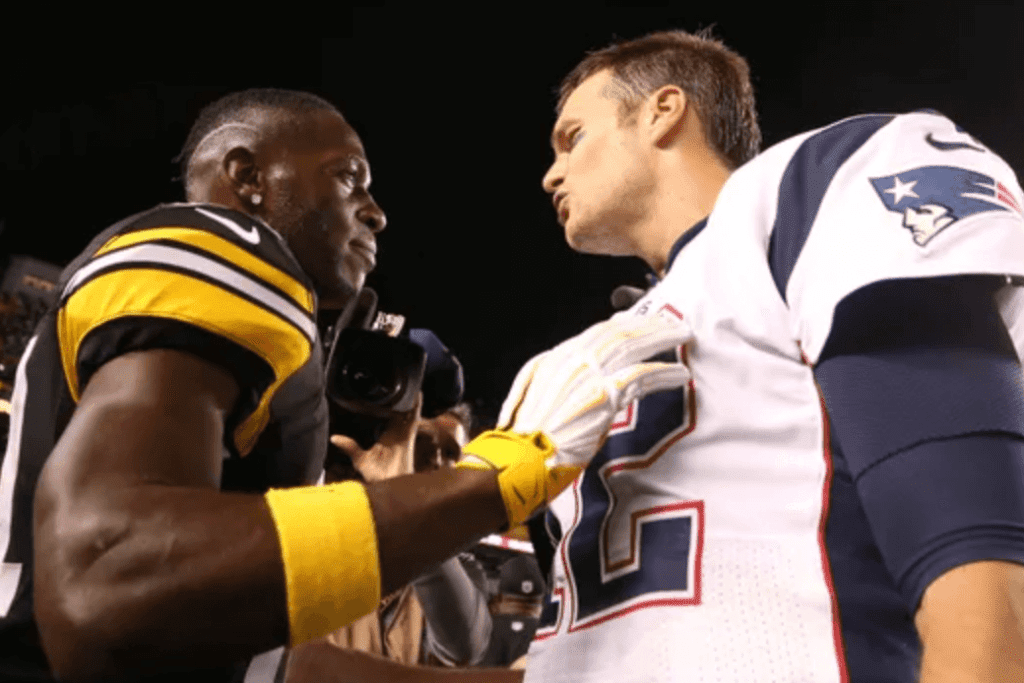 We tried to talk ourselves out of Antonio Brown on the Patriots, but ultimately it was the most predictable move ever.

The Patriots made the move the rest of the league didn’t want to see, inking the seven-time Pro Bowler to a one-year deal worth up to $15 million with a $9 million signing bonus, according to ESPN’s Adam Schefter.

Brown confirmed the news on social media. He won’t be eligible to play against his former team on Sunday night but will be allowed to play in Week 2 against the Miami Dolphins.

There’s a lot to unpack here. Brown’s tailspin with the Raiders, his departure from Pittsburgh, and of course, the undeniable talent that the wide receiver brings to New England.

Let’s start with a timeline of events for Brown in Oakland, and it’s not pretty:

March 9, 2019 – the Steelers trade Brown to the Oakland Raiders in exchange for a third and a fifth-round selection in the 2019 NFL Draft.

August 3, 2019 – Brown posts pictures of his frostbitten feet caused by not wearing proper footwear during cryotherapy session, forcing him to miss ten out of 11 training camp practices with the Raiders.

August 9, 2019 – Brown files a grievance to continue wearing his old helmet, a Schutt Air Advantage, even though it was banned. He threatens to retire from football if he was forced to wear a new helmet. An arbitrator denied his grievance.

August 19, 2019 — Brown files a second helmet grievance arguing that he should be granted a one-year grace period to phase out his old helmet during the 2019 season. The second grievance was also denied.

September 4, 2019 – Brown chooses to wear the Xenixth Shadow helmet for the 2019 season, but is fined $54,000 by the Raiders due to unexcused absences. Brown then posted his fine letter to Instagram.

September 6, 2019 – Brown makes an emotional apology at a Raiders team meeting, and Raiders head coach Jon Gruden says the plan is for Brown to play in the season opener.

September 7, 2019 – the Raiders inform Brown that they’ve voided the guaranteed money in his contract, and Brown requests his release from the team as a result. Later that day, Brown was released.

September 7, 2019 – Brown and the Patriots reportedly agreed on a one-year contract.

All of that and the superstar receiver didn’t even play a game for the Oakland Raiders.

We could also go further back to Brown’s last two years in Pittsburgh where he, among many other things, sat out the final game of the 2018 season after a blow-up with quarterback Ben Roethlisberger.

As far as we know, Brown’s last month-plus in Oakland is arguably the most tumultuous run for any player in the history of the NFL.

But the flip side is that the Patriots can now roll out Brown (Z), Julian Edelman (slot) and Josh Gordon (X) next week in Miami.

And on paper, that, combined with the rest of the offensive pieces, gives the Patriots the league’s best offense.

With all three phases loaded up, the Patriots are easily the frontrunners to repeat as champs, and could even chase another undefeated season.

Now that we’ve delved into the drama and hyperbole let’s take a look at Brown’s film and fit in the Patriots offense.

My favorite part of the Brown signing is that he’s a terrific fit in the offense as a versatile threat than can win at all three levels of the defense.

With the Steelers last season, Brown ran 21 percent of his routes out of the slot gaining an impressive 2.27 yards per route. For comparison, Edelman’s average was 1.88.

In layman’s terms, the guy can do it all. He doesn’t only run vertical, lines up all over the formation, and is a prolific deep target.

Here’s a snapshot of Brown’s potential route tree with the Patriots using highlights from last season:

Like any big-play receiver, go routes were apart of Brown’s game in the past and will be with the Patriots as well.

Last season, Ben Roethlisberger was 9-26 for 302 yards, seven touchdowns and an excellent 118.9 passer rating targeting Brown on go balls. Brown’s seven TDs on led the NFL on that particular route.

On this 47-yard touchdown, Brown is working against Falcons corner Robert Alford on the boundary. Brown stalls briefly in his release and then explodes, causing Alford to flip his hips upfield sooner than he wants, opening a pathway up the sideline. Then, you see Brown limit surface area for a jam by keeping his pads low and angling his body into Alford’s. The finisher is a swat with his inside hand, which clears Brown’s body for the blow-by and score.

Patriots fans might not want to see Tom Brady throw 26 go balls to Brown this season, but it’s different when you’re throwing them to a guy this good at running them.

Brown wasn’t as efficient on posts and corner patterns (7-27), but I still expect to see Brown run plenty of them this season.

Teams nowadays play more man coverage than ever, which makes it challenging to complete these kinds of passes.

One of Brown’s best skills as a vertical route runner is his ability to manipulate defenders downfield.

Here, the Panthers are in a cover-2 structure with the corner taking the flat and a half-field safety. Brown clears the underneath corner and then goes to work on the safety. The safety has outside leverage, so Brown attacks that leverage by getting vertical like a go or fade. Once he has the safety engulfed into his route, he opens to the middle on a post, turning the safety around.

Brown’s attention to detail is also terrific. Another two-high structure for the defense. The new Pats receiver does an excellent job of hiding his intentions from the safety. By keeping his body and eyes pointed vertically until his break, the safety can’t jump the corner route. Too easy.

The route that I’m most looking forward to seeing Brown run in the Patriots offense is crossing patterns at different levels of the defense.

Brown caught ten of his 15 targets on crossers a year ago running them out of several different alignments.

With his speed and skill after the catch, if the offense can create bubbles of space for him to run into, Brown can be incredibly dangerous on these types of routes.

Here’s a great example of Brown winning on a crosser against Jags All-Pro Jalen Ramsey in the right slot. Steelers tight end Vance McDonald releases vertically causing a subtle rub downfield. Brown quickly gets into the defense and fights off Ramsey at the catch point.

Patriots fans might recognize that route and pick combination. The team runs similar plays for Julian Edelman all the time.

Another way the Patriots can get Brown the ball is on underneath crossers. On the play above, the Steelers convert on third down by sending Brown on a drag route from a reduced split. Brown runs his defender right by the dropping linebacker, which causes the two defenders to collide, and then you see the YAC opportunities that these routes can present for Brown.

The Patriots and Brady love to attack the middle of the field, and Brown is a nightmare to defend on in-breaking routes.

You’ll be hard-pressed to find a better release at the line than this one from AB against Bengals corner Dre Kirkpatrick. Brown uses a one-step or stretch release and then rips through Kirkpatrick, dusting him at the line. After the catch, Brown becomes a ball carrier instantly, eyeing the angle the safety takes towards him and making him miss to get into the open field for a cool 48 yards. Whew.

Another shorter pattern that Brown has success with is the curl route hauling in eight of his nine targets on those routes last year.

Here’s a great example of Brown’s ability to process zone coverage and find the holes. The Raiders are in a two-deep structure before the snap but rotate into cover-3 or single high after the snap. Brown reads the drop by the boundary corner and sees the linebacker buzz to the flat, and sits his route down over the middle. Then, you see his willingness to grind out yards after the catch. Ben starts his throwing motion before Brown gets into his break.

Finally, the Patriots can also get Brown the ball on screens and quick hitters against off-coverage.

On this play, the Steelers have a slip screen set up to the two receiver side. Brown widens at the snap, which causes the slot defender to go outside with him, but the play hits in the middle. That’s a great job of setting up your blocks, running off of them and manipulating the primary defender.

As Brady is known to do, you can also throw quickly to Brown when the corner is in off-coverage.

Here, both Roethlisberger and Brown recognize that the corner is playing off, and Brown turns immediately for the pass. Once he has the ball, he breaks a tackle and then out-runs the safety to the end zone.

Admittedly, we are making several concessions hyping up the marriage between Antonio Brown and the Patriots.

Brown needs to get his head screwed on straight, and he needs to accept a role within a team structure that prioritizes winning more than self-promotion.

With that said, I do think some of Brown’s reputation for being a me-first athlete is overblown.

His excellent practice habits and work ethic are well-documented.

And former sixth-round picks don’t make seven Pro Bowls without working their asses off to get there.

The chess match for opposing defenses will also keep defensive coordinators up at night.

Play two deep safeties against the Patriots taking a player out of the box, they can run all over you and destroy you in the middle of the field. Play single-high and Brown and Gordon have one-on-ones for four quarters on the perimeter.

The Patriots had one the best receiver in football fall into their laps, and Bill Belichick is the perfect coach to make it work.