The Patriots' rookie is impressing everyone nine games into his NFL career. 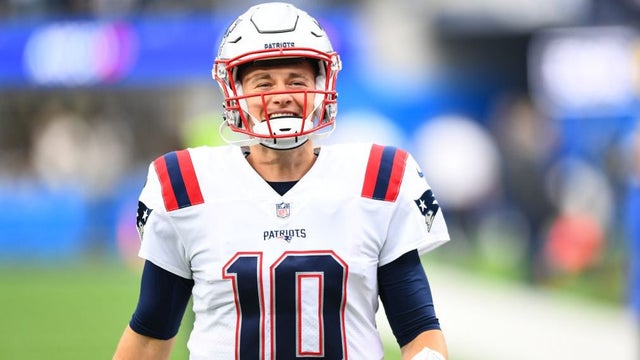 The Patriots are thrilled with quarterback Mac Jones’s development nine games into his rookie season.

Jones is doing exactly what team decision-makers thought they’d get out of him when they decided to release veteran Cam Newton and named Mac the starter following a camp battle this summer.

The Pats’ first-rounder fits like a glove in offensive coordinator Josh McDaniels’s system, sets the table pre-snap, is consistently accurate, and is wise beyond his years in decision-making and post-snap reads; he has a knack for knowing where to go with the football.

“Mac has made progress in basically everything we’re trying to do,” offensive coordinator Josh McDaniels said this week. “Seeing things and identifying the front variations that you see a lot of in the National Football League, coverage disguise, little tips and indicators from the secondary that every team tries to hide at times. If a game can slow down for you a little bit — pre-snap, post-snap — based on some things that you’re learning and some things that you’re able to utilize, I think that’s always a huge benefit to you as you go forward.

“We put a lot on the quarterback. And he’s never shied away from that. He’s always loved the burden that we put on the QB, even though he is young and learning.”

On the tape is a quarterback willing to deliver downfield under pressure who gets his eyes to the open receiver. Above, the Panthers bring a wrap blitz from the linebacker level that gets a free runner towards the QB. Jones stares down the barrel, finds a favorable one-on-one matchup for tight end Hunter Henry, and puts it on Henry to move the chains on third down.

Here, the Patriots call mesh/wheel on third down, and the Panthers ran a one-cross man coverage, a good call against mesh. Carolina safety Kenny Robinson exchanges with Stephon Gilmore to take away the crossers. Jones gets off his first read, sees the man coverage matchup for Brandon Bolden on Panthers linebacker Shaq Thompson, and drops a dime.

The statistical results for Jones in his rookie campaign don’t blow you away yet (out of 33 QBs): 21st in QBR, 15th in expected points added, tenth in completion percentage over expected (CPOE), 21st in DVOA, and ninth in Pro Football Focus grade. 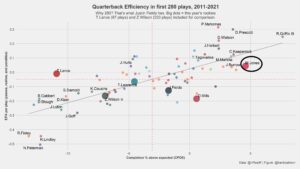 Middle of the pack isn’t anything to write home about for a veteran. But comparing him to quarterbacks in their first NFL snaps over the last decade, Jones is having a terrific start to his career.

Plus, it’s also fair to point out that New England’s pass protection and skill group is far from elite.

Although the mid-season review on Jones is overwhelmingly positive, he’s been in a funk of sorts over the last two weeks in matchups with two of the best pass defenses in the NFL.

The Patriots won both games behind strong performances from their defense and running game, making Jones more of a supporting cast member rather than a lead actor recently.

On the one hand, when the Pats’ passing attack faces two top-five pass defenses in a row, it makes sense to lean more on other areas of your team; why play with fire? It’s smart coaching.

And when the Patriots needed a drive from the offense, Jones orchestrated a 14-play, seven-minute jaunt down the field to seal a victory over the Chargers with a late field goal.

But if he’s going to be a sidecar, as he was when he attempted only 18 passes in Sunday’s win, which isn’t a bad thing depending on the matchup, then the turnovers cannot happen in multiples.

Former Patriots corner Stephon Gilmore made a terrific play on his interception. Still, that’s a throw that never stood a chance with Meyers getting bumped off his route and Gilmore breaking on the ball. It’s a timing play (slant/flat pick), but Mac needs to make a better decision there to avoid an INT.

On Brian Burns’s strip-sack, it was one of a few times that Jones got hung up on his primary read and didn’t get the ball out quickly enough. It took Burns 3.6 seconds to sack Jones on the play, so there was plenty of time for Mac to make a decision with the protection breaking down late.

Looking at the coach’s copy, it appears that Jones was looking in Meyers’s direction against man-free (cover-one) coverage. In man-free, there’s no help at the sticks, just post-safety help over the top. Meyers is running an in-breaker and has leverage on Gilmore. In Mac’s defense, it takes Meyers forever to run his route. Bolden flashes open on the angle route over the middle for a faster completion. Ideally, you’d like to see Jones come off Meyers quicker and hit Bolden, especially against a great pass rush.

According to Pro Football Focus, Jones’s nine turnover-worthy plays this season is tied for 16th among 33 qualified QBs. Fewest among rookies and fewer than Josh Allen and Patrick Mahomes (who both have 13). In other words, giveaways aren’t a consistent problem for Mac.

But, eventually, the Pats will need more from Mac against elite defenses, such as in their two matchups with their division rivals in Buffalo, who are number one in pass DVOA this season.

The Patriots blew out the Panthers even with two giveaways by their quarterback, but that won’t be as easy when the quarterback on the other side is Josh Allen instead of Sam Darnold.

Jones has the Pats half-a-game out of the AFC East lead and in a wild card spot if the playoffs were to start today. Obviously, they don’t, but there are bigger games on the horizon.

According to Football Outsiders, the Patriots’ chances to make the playoffs are a very real 57 percent. Now, they need their rookie quarterback to finish what he started.