The Patriots offense is going through some changes this offseason. 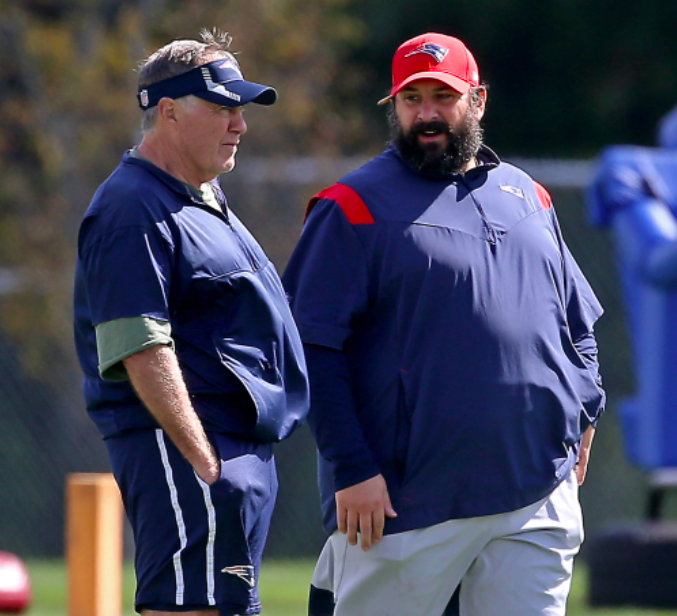 Over the years, Josh McDaniels and Bill O’Brien have added plays and adapted the scheme to the team’s best offensive personnel. For example, McDaniels revolutionized the game with the 2007 Patriots playing three wide receivers to run its offense through Hall of Famer Randy Moss and All-Pro slot receiver Wes Welker. Then, O’Brien installed more tempo, spread, and two-tight end elements to utilize Rob Gronkowski and Aaron Hernandez in the early 2010s.

However, the system’s play-calling verbiage and general outline haven’t changed since Weis led a young Tom Brady to three Super Bowl championships in the first phase of the dynasty.

Heading into a season without an official offensive coordinator for the first time since 2010, Belichick and current Patriots players have spoken about “streamlined” terminology offensively.

Although Belichick noted the team cleans up its verbiage every few years on both sides of the ball, the players seem to feel it’s a noticeable change to a more simplified play-calling system.

“They took out a little bit of thinking for us. They kind of dumbed it down a little bit so everybody can play faster,” starting offensive tackle Isaiah Wynn told reporters earlier this month.

Along with simplifying the play-calling, the Patriots also increased their usage of Shanahan tree-style concepts during June’s minicamp and spring OTA practices.

Unlike the Pats’ traditional downhill rushing attack, Shanahan and his disciples stress the defense by horizontally stretching the field with outside zone runs and bootleg actions.

Sources within the organization were quick to downplay a seismic shift in the scheme, but one source pointed to Belichick’s mutual respect for the Shanahan’s and their style of offense. For years, a source said, Belichick has toyed with the idea of mimicking the Shanahan system.

As of now, we can chalk a practice circuit filled with outside zone and bootleg drills up to spring experimentation, but it’s certainly worth noting the noticeable shift in philosophy.

Let’s go over the main differences between New England’s traditional offensive system and the outside zone craze that is taking over the NFL:

The basis of the entire Shanahan coaching tree is its early-down sequencing with an outside zone rushing attack and under-center play-action passes creating explosive plays.

According to Pro Football Focus, only 10.3 percent of the Patriots’ rushing plays last season were outside zone concepts. Instead, the Patriots majored in power, counter, and lead schemes.

Here is an example of New England’s counter lead scheme. The backside guard pulls to kick out the play-side edge defender, the fullback leads through the hole, and the running back reads the fullback’s lead block to find daylight.

The Patriots also love a traditional two-back lead play where the offensive line sets up a fullback-on-linebacker block in the hole to clear the way for the ball carrier to get downhill. But we know those schemes won’t be as prevalent this season with New England phasing out the fullback in their offense. 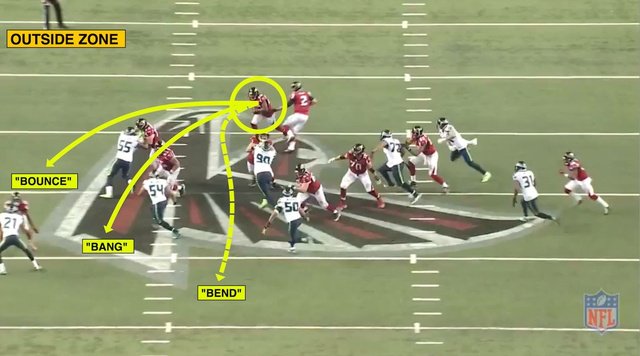 In an outside zone scheme, the blockers set up three reads for the running back to bounce, bang, or bend by cutting back into the middle of the field to hunt explosive plays.

As you can see above, these runs look very different from New England’s downhill concepts. The offensive line is stepping out at a 90-degree angle and moving horizontally across the field, with the idea of either beating the defense to the edge or pinning the front down to cut it back.

The Patriots’ offensive line is led by two bulldozers in offensive tackle Trent Brown and projected starting right guard Mike Onwenu, who weigh 340-plus pounds. On the surface, those two are built to anchor a downhill rushing attack due to their immense playing strength and power.

However, Brown did play in Shanahan’s scheme for three seasons with the 49ers and is uniquely athletic for his size. For example, the play above shows Brown pulling into space on a toss play that uses similar techniques to an outside zone run for the offensive line.

Plus, New England selected an exceptional athlete at left guard in first-round pick Cole Strange, with Strange coming from Chattanooga’s outside zone-based scheme in college.

The Patriots also selected running back Pierre Strong in the fourth round, who ran a position-best 4.37-second 40-yard dash at the 2022 NFL Combine and is the perfect back for outside zone schemes.

The key to having a good play-action passing attack is making the play-action concepts look the same as your running plays to deceive the defense into thinking the running back is getting the ball.

New England marries its running game to create openings through play-action by creating a false key for the linebacker level with a pulling guard or the fullback leading through the hole.

Here’s Brady hitting Gronk on the same play he describes in the video. #Patriots pic.twitter.com/WlGW7PzxiU https://t.co/PmzD2irItT

In this example, the Pats are not running their staple “Charles Barkley,” where the backside guard pulls to mimic a power or counter handoff, which gets the second level out of the passing lanes as they false-step upfield.

Although New England’s had tremendous success with their power play-action concepts, the outside zone offenses paced the NFL in play-action efficiency last season.

The top four passers in play-action yards per pass attempt were Cleveland’s Baker Mayfield, Bengals quarterback Joe Burrow, the 49ers’ Jimmy Garoppolo, and Rams QB Matthew Stafford. What do they all have in common? Their primary run blocking scheme was outside zone in 2021.

First, the outside zone system creates easy yards off bootleg actions with motion and misdirection. By changing the point of attack with bootlegs, the play design gives the quarterback an easy outlet on the “slide” route, run by a prolific YAC receiver coming across the formation into the flat where the quarterback is rolling out.

Along with easy dump-offs to moving targets for big gains after the catch, the run sets up downfield shot plays with defenses loading the box and relying on three-deep coverage shells.

Most defensive coordinators don’t want to be a man short in the box against these prolific rushing attacks, so the offenses counter with short bootleg action. Typically, the go-to route combination is post-cross, with the deep post occupying two defenders, leaving the crossing route one-on-one against an out-leverage defender.

For the Patriots, one could see tight end Jonnu Smith presenting problems for defenses on the slide route/bootleg concepts. On the downfield plays, field-stretchers Nelson Agholor, and second-round pick Tyquan Thornton can clear out the coverage while Kendrick Bourne and Jakobi Meyers go to work on the intermediate crossing route.

Bootleg play-action is designed to open up the short passing game for easy yards after the catch, and outside zone teams also hit big downfield shot plays.

By horizontally stretching the defense with misdirection and marrying the bootleg actions to the running game, the outside zone system creates tons of open space for receivers to operate.

PRE-SNAP MOTION AT THE SNAP VS. PRE-SNAP SHIFTS BEFORE THE SNAP

Lastly, the other major difference between the two systems is that the Shanahan tree specializes in pre-snap motion while the Patriots utilize more pre-snap shifts.

Under McDaniels, the Patriots used pre-snap shifts to give quarterbacks a coverage indicator and change the formation at the last second, forcing the defense to communicate on the fly. If a defender follows a receiver as they shift, it’s most likely man coverage, and the safety alignment might also give itself away before the snap, making it easier to read the defense.

Motion at the snap rates for the 2021 season!

49ers ran more motion at the snap than anyone on both run and pass plays. pic.twitter.com/kn5TQT2RTY

According to ESPN’s data, the 49ers were by far the league leaders in pre-snap motion last season, while the Patriots were near the bottom of the NFL in using pre-snap motion.

Motioning as the ball is snapped creates favorable leverage for the player in motion to pick up yards with the ball in his hands or causes the defense to change its structure, opening holes for the offense to attack elsewhere. Oftentimes, the motion is just eye candy.

Based on ESPN’s data, teams generated +0.04 expected points added per pass play and +0.02 EPA per rushing attempt when they used pre-snap motion rather than running a stagnant offense.

In the 2020 season, the 49ers dismantled the Patriots’ defense by throwing to the receiver on motion plays into the flats and running “pop” passes where the ball went to the player in motion as he went by the quarterback.

In this example, the jet motion is just eye candy, causing the defense to bump over a gap as the ball is snapped, which creates an easier pathway up the field for the running back.

New England’s best threat when they used pre-snap motion last season was Kendrick Bourne, but one could also see Smith or the speedy wideouts used in that vein (Agholor, Thornton).

As the numbers suggest, offenses that don’t utilize pre-snap motion are at a disadvantage.

The most important aspect of any offensive shift for the Patriots is catering the scheme to second-year quarterback Mac Jones, whose processing speed and accuracy are strengths.

Jones isn’t known for his mobility, but he looked comfortable throwing from moving pockets on the rare occasions that the Patriots dialed up bootleg or rollout-style plays for their young QB.

The fear here is that the Shanahan tree purposely moved on from pocket-passers Jimmy Garoppolo and Jared Goff in favor of more athletic, bigger-armed quarterbacks.

Los Angeles won the Super Bowl by upgrading from Goff to Matthew Stafford, while San Francisco is attempting to do the same with 2021 first-rounder Trey Lance taking over for Jimmy G.

But on the other hand, Garoppolo and Goff were a few plays away from winning Super Bowls in the Shanahan/McVay systems, so quarterbacks with those skill sets can succeed. There are also chances to feature shotgun spread elements in obvious passing situations where Jones will thrive.

Speaking to reporters during the 2022 NFL Draft, Director of Player Personnel Matt Groh said the onus was now on the coaching staff to give new playmakers Tyquan Thornton and Pierre Strong opportunities to use their home run speed.

Using more Shanahan tree concepts should generate those opportunities for New England’s skill players to play in space more often, which is a good thing for the Patriots’ offense.