Lazar: Damien Harris Should Be the Patriots’ Lead-Back Moving Forward 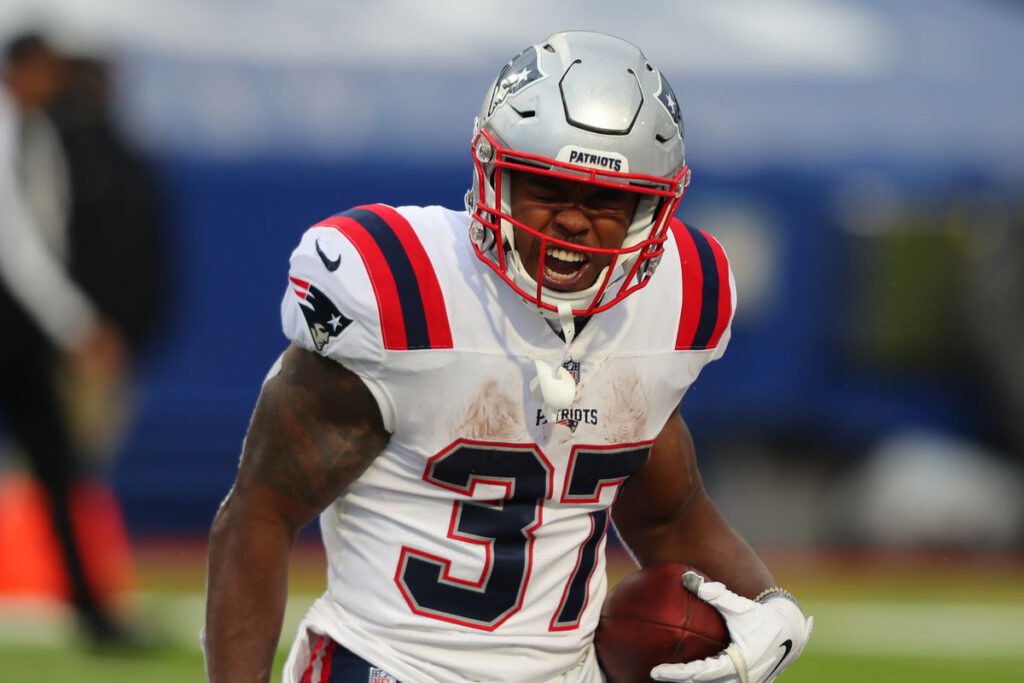 Patriots running back Damien Harris was considered one of the top running backs in the country dating back to High School.

Harris was a five-star recruit coming out of Madison Southern High School in Berea, Kentucky, and was the top running back and eighth-best player in his class, according to Rivals.com.

The 23-year-old ran for over 6,700 yards and 122 touchdowns for Madison Southern. Then went on to play for head coach Nick Saban at Alabama, where he won two national titles and led the Crimson Tide in rushing for three consecutive seasons.

However, the 2019 third-round pick hit a road-block when he got to New England in the form of veteran backs already mastering a complex playbook, a former first-round draft choice among them.

As a result, Harris took a similar development path as teammate James White or former Patriots running back Shane Vereen, riding the bench while the vets carried the load.

Despite an intriguing rookie preseason, Harris only appeared in two games for the Patriots in 2019, carrying the football just four times in what was effectively a red-shirt season.

With the Pats offense looking for a spark, many wanted them to turn to Harris, who again flashed in August, but Bill Belichick and Josh McDaniels stuck with Sony Michel and others.

Harris’s lack of playing time was met with concerns about his talent; was he bust? Those snap-judgments were obviously premature. Still, the offense needed help, and they weren’t turning to Harris.

“Damien didn’t have a lot of opportunity his rookie year due to the players that were in front of him at his position and the health of those players. He’s gotten a chance to play this year, and he’s shown to be a very competitive and productive player,” Belichick told CLNS Media.

“It’s different, but I’d say, in a way, some similarities to James White. James didn’t play his rookie year and then had an opportunity to play a second year. He’s been consistent. He’s been dependable.”

Anyone familiar with Belichick knows consistency and dependability are huge compliments from the head coach. Longtime running backs coach Ivan Fears echoed a similar sentiment, saying that Harris didn’t play his rookie season due to circumstances that had nothing to do with talent.

“Damien, I’ve always thought, was a pretty good player. I mean, it’s just a matter of getting it all in, getting healthy, timing. There are a lot of factors involved, but he’s definitely taking the bull by the horn and is playing really well right now,” Fears said.

After mostly sitting out as a rookie, Harris hit another speed-bump when he broke his pinky finger catching a pass from backup quarterback Jarrett Stidham in practice, landing him on injured reserve for the first three games of 2020.

Now, Harris is finally getting his chance and is making the most of it by averaging 5.6 yards per rush on his 63 carries this season (8th in NFL).

Harris is fourth among all running backs in Pro Football Focus grade (87.0), eighth in rushing yards over expectation, and ninth in Football Outsiders’ DYAR metric.

With Michel serving his own stint on injured reserve, we are likely watching Harris take the former first-round pick’s job as the primary early-down ball carrier.

Both Harris and Michel are mostly involved in running plays, with Harris on the field for slightly more but still a low percentage of passing plays (31.7 to 29.6).

The Patriots boast one of the best offensive lines in football, which deserves the lion’s share of the credit for their rushing success, but Harris adds more to the blocking than Michel.

As we mentioned, Harris currently ranks eighth in NextGen’s rushing yards over expectation stat and is tied for 14th in average yards after contact (2.95).

Harris’s ability to run with power and contact balance, two great traits for a running back, stand out and separate him from Michel in his coaches’ eyes.

“The thing that he does for a guy his size, he runs hard, which is really, really nice. And I mean, he runs hard, and his vision is outstanding. He’s going to be a downhill runner,” Fears told me. “He hits you hard. He hits you fast. That’s the kind of stuff that makes him so attractive. A little different than Sony.”

Here’s a great example from last Monday night’s win over the Jets. The Patriots are running a fullback lead play out of their typical I-Formation. Rookie right tackle Michael Onwenu gets beat inside on his block, forcing fullback Jakob Johnson to engage no. 91 John Franklin-Myers to help Harris through the line of scrimmage. With Johnson blocking Franklin-Myers, it leaves the MIKE, Johnson’s man, unblocked. Jets linebacker Neville Hewitt makes initial contact with Harris three yards past the line, meaning a tackle there would be a 3-4 yard gain. Instead, Harris lowers his pads to break Hewitt’s tackle, and it takes four Jets to bring him down for a gain of 21 yards. That’s at least 17 yards after contact created by the back.

“I’m trying to gain those extra yards trying to run through contact, just trying to keep my feet moving and always trying to, to just add on to whatever is out there and maximize every opportunity touching the ball.”

The Pats running back did something similar the week prior against the Bills. This time, the Pats ran inside zone, and tight end Ryan Izzo lost his block, giving Buffalo’s Trent Murphy a chance to make a tackle at the line of scrimmage. However, Harris spins out of Murphy’s grasp and gains 13 yards. Again, getting more than what’s initially blocked.

As Fears mentioned, Harris has also displayed terrific vision and enough burst to get into the open-field in a hurry.

The second-year pro’s longest run of his career came when he made his season debut against the Chiefs in Week 4. On the play, Harris reached a top speed of 20.6 miles per hour with the Pats blocking cross-lead. When the Chiefs flow to the fullback, Harris spots the cutback lane and explodes into the secondary. The key on this run is that Harris doesn’t commit to the cutback too early, continuing on his pre-planned rush path to get the linebackers to commit inside before bouncing outside.

Along with lead plays, nearly half of Harris’s carries come when the Patriots pull an offensive lineman, almost always a guard, as a lead blocker on counter or power-style schemes.

Harris is averaging a stellar 6.1 yards per rush, with 67 yards coming after contact when a puller is involved. Plus, he’s second only to teammate Cam Newton in EPA success rate with pullers.

His first career touchdown came on a fullback counter scheme. The Pats get a great double-team by the left side of their line, which allows right guard Shaq Mason to kick-out the play-side defensive end, and Johnson leads to the second level. Instead of following Johnson immediately, Harris runs directly at Buffalo’s Tremaine Edmunds in the A-gap, forcing Edmunds to stay inside rather than flowing to the hole. Harris then uses subtle footwork to alter his path to cut behind Johson into the secondary and breaks the safeties tackle as the last line of defense for a 22-yard trip to pay-dirt.

Harris, a smart man, gave the credit for his success pullers to his offensive line. In fact, he credited them with more than just that.

“The more that I can just sit there and let them do their thing and let them handle it, they definitely made my job a lot easier,” Harris told CLNS Media.

“So those guys do an incredible job, not even just every game every day in practice, just setting the tone, setting the tempo of our offense, because that’s the anchor, the offensive line, kind of starts with them and ends with them.”

Although Harris hasn’t altered the Patriots’ play-calling to feature more early-down passes, that seems to be more of a team philosophy rather than anything to do with his skillset.

Other than a loaded depth chart, there were some murmurs from team sources that Harris was a little behind as a rookie in the passing game (routes, blitz pickup).

Mostly due to better production in the play-action passing game, the Patriots are averaging 0.22 EPA per pass play more when Harris is on the field.

Harris has looked capable as a receiver and a ball carrier on running back screens coming out of the backfield. If they want him to run more routes, he has the ability.

Plus, the Pats running back has an excellent 85.9 grade on seven pass-blocking snaps, per PFF. On the play above, Harris maintains inside-out leverage on the blitzing safety, allowing Newton to step up in the pocket, leading to a 20-yard reception for Jakobi Meyers.

As Patriots head coach Bill Belichick takes heat for a spotty draft record of late, Harris perfectly exemplifies the importance of patience with a young player entering the NFL.

After his rookie season, Harris might’ve looked like another top 100 pick that wouldn’t contribute at a high-level. Now, he’s one of the league’s best at his position in year two.

The Patriots could certainly use more Harris-like breakouts among their recent draft picks, but they did find a running back who can elevate their rushing attack.