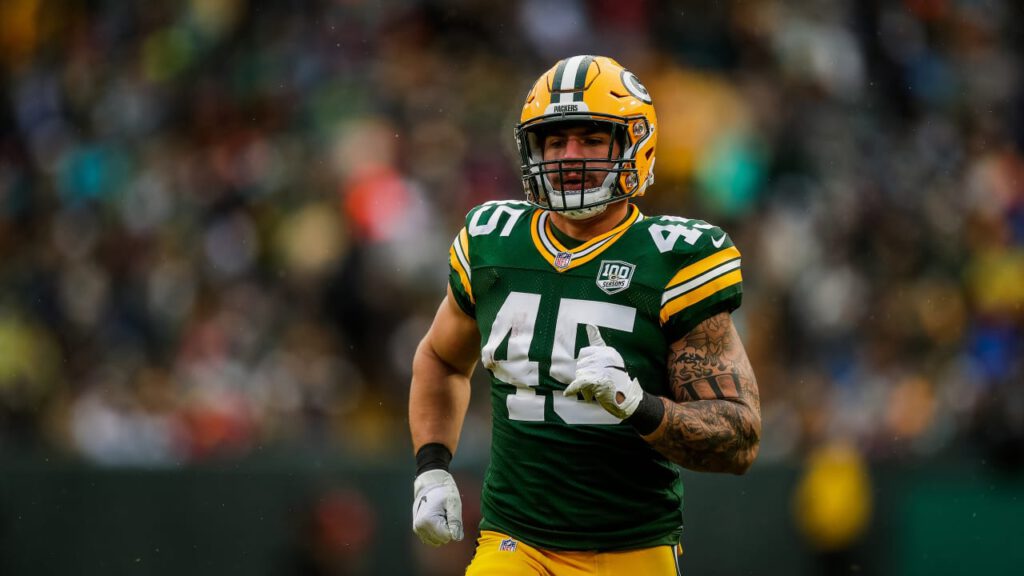 The Patriots continue their quest to roster more fullbacks than any team in the NFL by adding former Packers fullback Danny Vitale, a source confirms Meredith Gorman of NESN’s report.

The sixth-round pick out of Northwestern is listed as a fullback, but he wears many hats, playing some fullback, tight end, running back, and an h-back type role throughout his career.

In college, Wildcats fans referred to Vitale, who had nearly 1,500 yards from scrimmage and 11 touchdowns in four seasons, as a “super-back” due to his versatility and athleticism.

Vitale actually played more snaps in passing situations (88 snaps) than as a lead blocker in the running game (81 snaps) in Green Bay last season, which makes him different from Pro Bowler James Develin.

Develin’s health could be a concern as he returns from season-ending neck surgery a year ago, and this move could be insurance, along with Jakob Johnson, in case Develin has a setback.

But after some film review, Vitale strikes me as a different player, more receiver than a blocker, which could help him carve out a role regardless of Develin’s health.

Last season, Vitale caught seven passes for 97 yards with Green Bay, which isn’t much to write home about, but his teammates in Green Bay credited him for his speed, smarts, and hands.

“He has surprised all of us with his athleticism,” quarterback Aaron Rodgers said last season. “Kinda look at him sometimes, you think meathead, weight room guy, be you realize he can run, he can catch, he can read coverages. He’s been very impressive.”

Plus, Vitale was an above-average pass-blocker in Pro Football Focus’s system (71.4).

Here, Packers head coach Matt LaFleur dials up a staple concept in the Shanahan coaching tree: a fullback wheel route off of play-action. The idea is to simulate an ISO play where the fullback leads through the hole and gets a clean shot at the mike linebacker. The run action tricks the linebacker into screaming upfield into the gap, and Vitale runs right by him to wheel out of the backfield up the sideline. As you can see, Vitale looks comfortable catching the ball, and his speed is effective.

The Packers would occasionally put Vitale alone in the backfield, seemingly as a personal protector for Aaron Rodgers, but sometimes he’d run pass routes instead.

On this play, Vitale gets the defensive end in coverage as the defense brings a replacement blitz; the off-ball linebacker comes at the QB with the end dropping into coverage. Rodgers misses a wide-open Vitale, who runs a smooth angle route over the middle.

Green Bay would also motion Vitale out of the backfield leading to reps at tight end (13 snaps), outside receiver (19), and occasionally in the slot (six) depending on the play call.

This time, Vitale motions into a standup tight end role in a wider split to help him reach the edge before the defender. Vitale beats the end in coverage once again, and Rodgers beats the blitz for an explosive play by dumping off to the rolling Vitale in the flat.

As a run blocker, Vitale leaves a lot to be desired, posting a 41.6 blocking grade on 81 snaps.

In the games we watched, Vitale struggled at times with his hand placement, centering on blocks, and navigating traffic at the line of scrimmage to get to his assignment.

On this block attempt, you can see Vitale’s hands get outside the defender. He’s unable to control the encounter as a result and falls off his block.

The good news is the effort is there, and his athleticism allows him to make blocks on the move on outside handoffs, coming across the formation, or any other movement blocks. Vitale didn’t have a ton of experience in college lead-blocking at fullback, so it’s a skill he could improve on with coaching.

Here, Vitale comes across the formation on a split-zone scheme. The line is flowing to the left with Vitale coming back to the right, leaving a shot for him on the defensive end. Vitale kicks him out, leading the way for Jamal Williams into the end zone.

Over the last two seasons, only the San Francisco 49ers used a fullback more than the Patriots.

The advantages a fullback presents by allowing someone to gain a head of steam in either direction while making an easy read for the running back make it a staple in the Pats offense.

Now, they seem dead-set on making sure they don’t find themselves in that position again.