Lazar: Dante Scarnecchia’s Next Stop Should be the Pro Football Hall of Fame 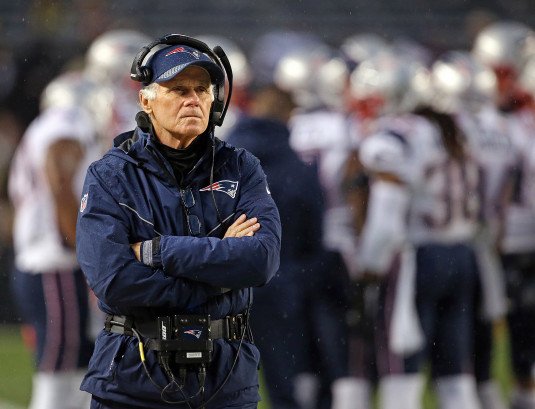 (121717 Pittsburgh, PA) Offensive line coach Dante Scarnecchia on the sideline during the first quarter of the game against the Pittsburgh Steelers at Heinz Field on Sunday, December 17, 2017.Staff Photo by Nancy Lane
Share
Facebook Twitter Email

The Patriots are approaching a potentially franchise-altering offseason and Tuesday’s news that longtime offensive line coach Dante Scarnecchia is retiring adds to the organizational turnover.

Scarnecchia’s 34 seasons with the Patriots is the longest coaching tenure in team history as he predates even Belichick, with his first day on the job for New England coming back in 1982.

The legendary offensive line coach, who deserves a bust in Canton, was on the Patriots’ coaching staff for 22 of the franchise’s 27 playoff seasons and won five Super Bowl titles.

The Pats have turned late draft picks and other teams’ castoffs into productive starters thanks to Scar’s great eye for talent and ability to develop players, both young and old.

In their last Super Bowl-winning season, the Patriots had one of the league’s best offensive lines with a castoff at left tackle (Trent Brown), a third-round pick at left guard (Joe Thuney), an undrafted center (David Andrews), and a fourth-rounder (Shaq Mason) and fifth-round draft choice manning the right side (Marcus Cannon).

Brown signed the biggest free-agent deal for an offensive lineman in league history a season after former Patriot Nate Solder reset the market. Mason signed a massive extension with New England, and Joe Thuney will likely demand top-dollar in free agency this offseason.

And that’s only a snapshot of the money made by the talent that flourished under Scarnecchia.

Speaking to those that played for Scarnecchia, who all admitted that playing for Scar wasn’t for the thin-skinned crowd, pointed to a few keys to success.

First, Scarnecchia’s offensive line playing code, which he outlines in the video above and features the following coaching points:

– See the game through one set of eyes

– Trust the guys around you and build trust in each other

– Do what is expected of you on every play

– Be consistently good and give great effort on every play

– Train yourself to play with good habits

– Play your very best football when it counts the most

To hit those final two points, Scarnecchia then preaches repetition and building off of a set of core fundamentals on the practice field that carry over to game days.

Scarnecchia always stresses that it’s on him as a coach to put the players through drills that show up on the game tape, “if you don’t see your drills on film, you need new drills,” he’d say.

Scarnecchia’s self-awareness and ability to teach his players were, in many ways, his best attributes as a coach rather than his vast football knowledge or grinding coaching style.

Most importantly, the players need to understand what he’s preaching, whether it’s his offensive line playing code or a technique on a block, and he wasn’t above learning from coaches at all levels of football. In fact, he’d often observe High School coaches and their way of doing things.

Scarnecchia retired following the 2013 season for two years, one of which the Pats won the Super Bowl without him (2014), but then Belichick pulled him out of retirement following a loss in Denver in the 2015 AFC Championship Game where the offensive line crumbled at Mile High.

“Dante does an excellent job of developing younger players and getting older players and the playing group to play cohesively, and with good communication, and trust and accountability for each other,” Belichick said last September. “He’s an excellent game-planning coach and an excellent in-game coach in terms of making adjustments and recognizing what the problems are and fixing them. Very fortunate to have had the opportunity to coach with him for, going all the way back to ’96, for so many years.”

During his first hiatus, Scarnecchia served as an advisor and part-time scout occasionally working out draft prospects on the Pro Day circuit; hopefully, he’ll return in that capacity during the draft process.

But on the coaching staff, the Patriots have some massive shoes to fill, and two in-house candidates might take over for Scarnecchia next season.

Along with Bricillo, assistant running backs coach Cole Popovich assisted with the offensive line from 2015 to 2018 before moving over to the running backs. Popovich has a little more experience in New England’s system. Both coaches are well-liked within the organization.

The Patriots were grooming assistants to replace the 71-year-old, but there’s only one Scar, and if you were to build a Mount Rushmore of the Pats dynasty, his face might be up there alongside Belichick, Brady, and Kraft.