Lazar: Davon Godchaux Leading the “Stop the Run to Have Some Fun” Charge for Patriots 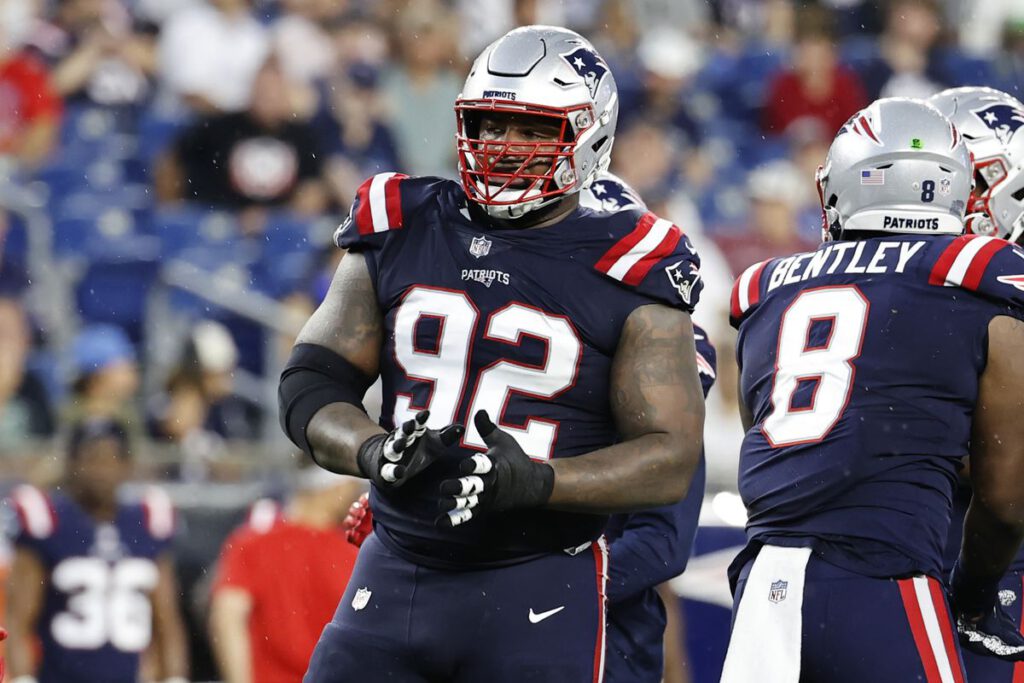 Patriots nose tackle Davon Godchaux has a perfect mantra for New England’s defensive line this season: “stop the run to have some fun.”

The former LSU standout said he took the phrase from Tigers head coach Ed Orgeron, adding, “It’s the most important thing. Everybody wants to pass rush. Everybody wants to get sacks. You can’t be a tough team if you don’t stop the run,” Godchaux said on Wednesday.

The Patriots signed the 310-pound nose tackle to a two-year contract in the offseason after a terrible season defending the run in 2020. Last season, the Patriots ranked 26th rushing yards allowed, 32nd in DVOA, and allowed the third-most rushing yards of the Belichick era.

As a result, New England was 29th in expected points added per play on first and second down, which led to the opposition having an average of just 6.3 yards to go on third down (29th).

The Pats were still an effective third-down defense, ranking fourth in EPA per play. Typically, Belichick turns up the pressure and runs exotic coverages in obvious passing situations, generating turnovers and negative plays by the offense. But New England’s struggles on early downs limited their opportunities to create havoc on third down.

With Godchaux, fellow free-agent signings Matt Judon and Kyle Van Noy, along with the return of Dont’a Hightower, Bill Belichick’s run defense should get back on track this season.

Here are a few examples from preseason action this summer of the Patriots’ reinvigorated run defense.

In this play, the Giants try to “slip” block Godchaux to run a G lead concept with the front-side guard pulling to kick out the MIKE. Pats linebacker Dont’a Hightower does his job on the play side to defeat a combination block by the two tight ends on the right side, resetting the base blocker into the backfield and absorbing the combo block. Hightower helps by setting the edge, but Godchaux makes the play by defeating his block while moving laterally down the line to make the stop.

On this third-down stop, Van Noy out-muscles the play-side tight end while Lawrence Guy absorbs a double-team block. The two Pats’ defenders on the right side of the line hold up the initial movement and make things messy for the backside guard pulling in front of the ball carrier. Godchaux and Akeem Spence are over the left side, shutting down the fold blocks, allowing Judon to run the play down from behind for a TFL.

Although there were some run fit issues to iron out from the preseason, the run defense product is showing signs of significant improvement.

For many reasons, this isn’t the 2020 season for the Patriots. But the physicality, technique, and football IQ they’ll have in the front seven is lightyears ahead of where they were a year ago.

New England finally has a true nose tackle again in Davon Godchaux, and he’s bringing the nasty back to the Patriots’ run defense.