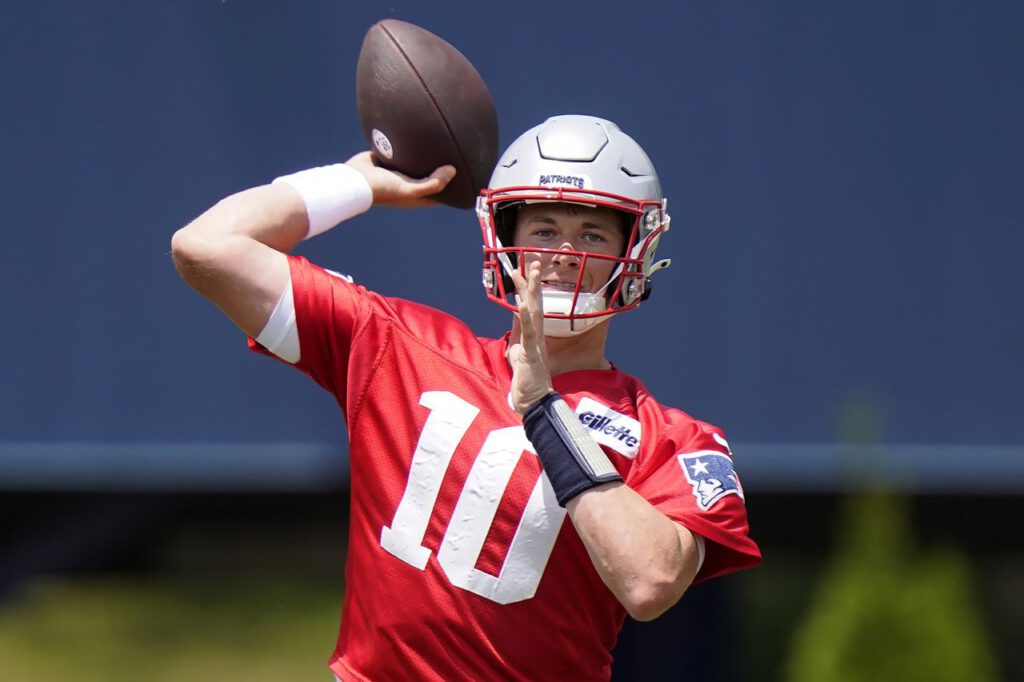 The most challenging thing with spring practices is deciding what’s real and what’s a June headline.

After all, the Patriots held a two-day minicamp without pads in a non-contact setting. There were competitive reps, but it’s not real football until the contact commences in training camp.

Every spring, there are surprising standouts who could fight in camp to make the roster, and sometimes those players become Julian Edelman, and in other instances, they’re Austin Carr. Tre Nixon? Great spring. Let’s see if it translates this summer.

Although it’s important to remember it’s only minicamp, there were two takeaways from Patriots practice this week that didn’t feel like June headlines.

First, Patriots second-year quarterback Mac Jones has improved his deep ball this offseason and is now more confident in his ability to attack single coverage downfield.

Jones completed 8-of-10 deep passes during minicamp this week, showing off pinpoint accuracy and improved velocity to test tight coverage. Nixon was on the other end more than any other Pats receiver, with a 50-plus yard bomb with Jon Jones in coverage on Wednesday and a terrific corner route that dropped perfectly in the bucket on Tuesday.

The second-year quarterback also lofted downfield passes for Jonnu Smith (twice) and DeVante Parker to elevate above defenders to high point the ball for big completions. Then, Nelson Agholor beat rookie corner Jack Jones clean, and Mac hit him deep on a go-ball for another completion.

Along with working on deep ball velocity with throwing coach Tom House and during practice, Jones stayed for as long as 45 minutes after each session to continue working on his craft.

Jones looks lean, strong, and driven to make the second-year leap that other quarterbacks have made in the past. Most recently, Cincinnati’s Joe Burrow had a similar offseason focus and took the Bengals to the Super Bowl in his second season.

Comparing what we saw from Jones this week to Burrow taking the Bengals to the brink of a championship is June hyperbole. Still, for a team with changes all around the quarterback, Jones is giving off the vibe that he’ll elevate a Patriots roster and coaching staff filled with question marks.

For Patriots fans, the best and most significant development this offseason is that Jones is doing all the right things to make the year-two leap.

Along with Jones’s positive development, the other major takeaway is that New England’s offense is strongly considering transitioning to a zone-based rushing attack after years of featuring a gap or power scheme.

In my five seasons covering the team, I’ve never seen the Pats hold two-straight days of practice without run periods featuring a fullback and pulling guards. It was a completely different look.

When we asked him about it on Wednesday, longtime Patriots center David Andrews chalked up the zone-heavy run periods to finding an offensive identity with this group or experimenting to find out what the Pats personnel does best.

As the Patriots streamline their offensive terminology and break in a green coaching staff, modifying the scheme to feature more zone concepts and bootleg-action jive with the goal to simplify things.

Typically, zone-based systems such as Sean McVay’s Rams or Kyle Shanahan’s 49ers make life easier on everyone compared to Josh McDaniels’s complex scheme that we’ve seen over the last decade.

An outside zone and bootleg play-action foundation make things more straightforward on the offensive line and receivers from a mental standpoint. Those schemes are also simplified for top offensive assistants Joe Judge and Matt Patricia, who are relatively new to coaching offense.

Another possible reason for the shift is getting New England’s skill players into more space to hit explosive plays, especially draft picks Tyquan Thornton and Pierre Strong, rather than the phone booth offense that heavier formations and power blocking schemes create (no more four yards and a cloud of dust. Let’s get into space and go).

It’s unlikely that the Patriots will abandon their power runs completely. But the fullback, as Jakob Johnson told German media after signing with the Raiders, is gone. And it appears we’ll see fewer pullers as lead blockers for the Pats this season.

There will still be skeptics questioning the Patricia-Judge-led coaching staff and an undecided offensive play-caller (although Patricia looks like the front-runner to call plays).

However, between Mac Jones’s improvements, the overall direction of the scheme, and enough depth at the skill positions to offer optimism, it’s easy to like where the Patriots’ offense is heading.

From this perspective, there are far more concerns about the defensive outlook in the early stages.

NOTES ON THE PATRIOTS DEFENSE

– Disclaimer: evaluating defense is difficult in a non-contact setting. How do you assess defensive players without tackling and real resistance from blockers? We won’t jump to any grand conclusions based on OTAs and minicamp.

– If the season were starting on Sunday, here is how I’d expect the Patriots’ defense to align:

– The Patriots’ top inside linebackers were Ja’Whaun Bentley and Raekwon McMillan in most team drills. Trade acquisition Mack Wilson worked with the starters at times, while Josh Uche and Ronnie Perkins got some reps off the ball as well. Second-year linebacker Cameron McGrone worked almost exclusively with the scout team defense.

– The Pats are giving Uche, Perkins, and 2020 third-rounder Anfernee Jennings every opportunity to seize a starting role. You can tell the team is crossing its fingers that one of those three becomes an impact starter this season.

– Rookie cornerback Jack Jones had an up-and-down week, but he was getting opportunities to run with the starting defense and didn’t look totally out of place. His ball skills and fluidity in man coverage were standing out. He’s on track to contribute in his first season.

– Unless Jack Jones becomes an impact starter, the Patriots’ cornerback group is worrisome. Mills and Mitchell aren’t complete liabilities, but they aren’t shutting down anyone either. Mac Jones tore this cornerback group apart all week.

– Top slot corner Jonathan Jones was moving well but looked rusty when it came to playing the ball in the air. He was on the losing end of several Tre Nixon highlight-reel catches.

– Another player that you hope is just rusty is Malcolm Butler. He still had some signature feisty moments in coverage where he was ripping the ball out. But he had some issues staying in phase against the starting wide receivers.

– It’s early. But Shaun Wade moving inside to slot corner didn’t go very well this week. Wade could match up well with bigger slots but doesn’t have the explosive gear to hang with speedy slots.

– It feels like Kyle Dugger and Christian Barmore are on the cusp of becoming Pro Bowl-caliber players. Dugger is a ball-hawk who needs more opportunities to see ball, get ball. Barmore is picking up right where he left off as a rookie. He’s a force.