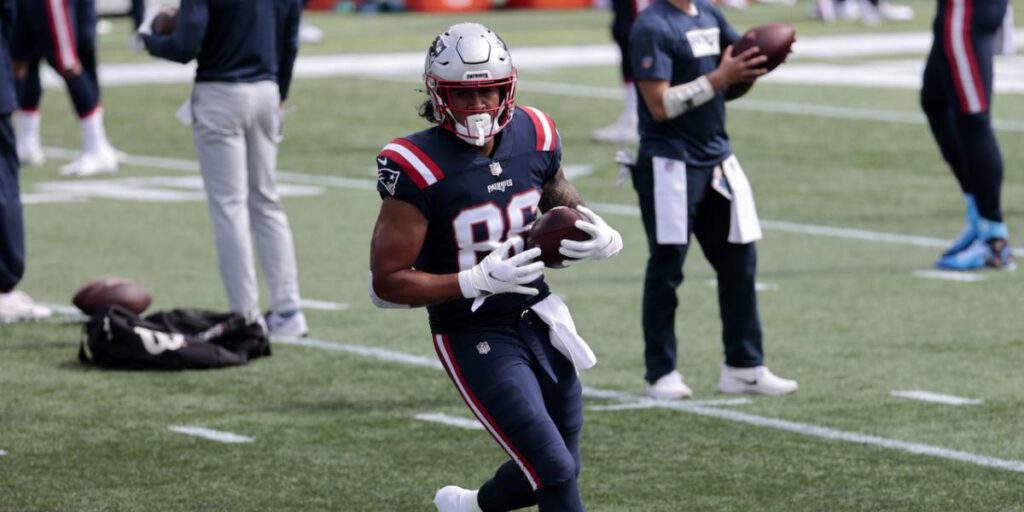 Patriots rookie tight ends Devin Asiasi and Dalton Keene have a combined two targets in their first seasons’ in the NFL after New England selected the duo in the third round of April’s draft.

Bill Belichick even traded up to select the pairing, as the Pats needed to turn the page with some youth at the position after the retirement and eventual departure of Rob Gronkowski.

However, slowed by injury, the two have registered almost nothing on the stat sheet in year one (two targets, one catch, eight yards).

Both rookies spent time on injured reserve this season, which undoubtedly played a role in stunting their growth, and tight end isn’t a position where first-year players typically excel.

Although it’s impossible to reach a conclusion on Asiasi or Keene with such a small sample size, the Pats invested decent draft capital in both and still haven’t improved at the position.

New England’s tight ends have the fewest targets (20), receptions (12), and are one of only three teams that haven’t thrown a touchdown pass to a tight end yet this season.

Asked about his rookie tight ends on Wednesday, Patriots head coach Bill Belichick wouldn’t go into an evaluation of either player after both missed time due to injury.

“It’s good to have them back out there,” Belichick said. “Last week they had a little more playing time but it didn’t correlate to more practice time or quality practice time because of the schedule we were on, so we’ll see how it goes here as they get more experience.”

With an eye towards 2021, and with starter Ryan Izzo now on IR, finding out where Asiasi and Keene stand over the last month of the season could significantly alter the Pats’ offseason plans.

If either rookie tight end starts to blossom, the Patriots might not need to aggressively pursue a high-priced free agent (Hunter Henry?) or a player at the top of the draft (Florida’s Kyle Pitts?).

We can’t make that call based on the first 14 games of 2020, but in last Thursday night’s loss to the Rams, Asiasi (23 snaps) and Keene (31 snaps) were thrown into the fire without Izzo.

After reviewing their opportunities in the game, it was the rookie out of UCLA that went 91st overall in the 2020 draft who put together the best tape as Asiasi is coming along.

The most encouraging sign for Asiasi was a solid 71.3 PFF run-blocking grade, which will lead to more snaps, and he looks much more comfortable in a traditional tight end role than Keene.

Here, Asiasi is down-blocking on the defensive tackle in New England’s trap scheme. The flow of the play does a lot of the work. Still, Asiasi does a nice job of playing with proper pad level and keeps his feet moving to maintain his leverage, staying in between Sebestian Joseph-Day (295 pounds) and the ball carrier. Hence, Damien Harris has room to run behind him. His footwork also allows Asiasi to avoid a potential holding penalty when Joseph-Day tries to spin out of the block.

In this play, the Patriots use a wham scheme where right guard Shaq Mason puts himself through to the second-level with fullback Jakob Johnson “whamming” the nose tackle. Asiasi uses good footwork and body positioning to shield off the defensive back at the end of the line from the ball carrier. Nothing fancy, but he does his job.

Similarly, here’s Asiasi kicking out the edge defender and showing some finish. The Pats are blocking fullback lead, and Asiasi earns a stalemate with the edge defender to assure Leonard Floyd doesn’t affect the play, then keeps driving his feet through the rep to stay engaged.

Patriots fans might not want to stop the presses for a few good positional blocks, but those are the types of plays that encourage the coaching staff to give Asiasi more playing time.

Plus, Asiasi had at least one opportunity in the passing game where he was open on his route and was Jarrett Stidham’s primary read on the play, but the Pats QB didn’t throw the ball.

New England simulates a trap play by pulling guard Joe Thuney to the edge defender, which gets the second-level of the defense out of the passing lane. Asiasi runs a quick post or over route into the middle of the defense and is wide open. For some reason, Stidham doesn’t like it, tries to work to his second read on the backside to N’Keal Harry, and is sacked before he can throw. That’s a play that Tom Brady and Rob Gronkowski used to execute in their sleep.

Asiasi was selected in the third round due to his prowess as a receiver and ability to hold-up as a blocker at in-line tight end. Both of those things started to translate against the Rams.

Although he was a decent blocker in college, Asiasi was drafted to add a receiving threat that won on verticals and option routes between the numbers.

The Pats rookie showed the ability to do just that on the play above. Hopefully, the Patriots’ quarterbacks won’t continue to miss an open Asiasi when the play design tries to get him involved.

Keene’s progress is less exciting, but that also has to do with his usage.

The 101st overall pick out of Virginia Tech was an H-Back for the Hokies, lining up off the line of scrimmage or even in the backfield.

Instead of running traditional tight end routes, most of Keene’s targets were on schemed touches such as screens or different types of plays designed to get the ball in his hands.

Patriots head coach Bill Belichick pointed out after he made the pick that Keene was in for a considerable adjustment as the Pats offense doesn’t use their tight ends in the same way.

“When you watch Dalton play, you just don’t see a lot of things that we do. The Virginia Tech offense didn’t really translate too much to a New England Patriots offense,” Belichick said.

The steep learning curve is showing for the Pats rookie, as his routes are unrefined and his in-blocking technique needs work. Keene gets off-balance by ducking his head into engagements and isn’t showing the same play strength as Asiasi for in-line duties.

Keene has good speed to run the seam, but he looks like a player with little experience in making cuts at the top of routes as expected. Plus, his route tree is extremely limited. He’s mostly clearing out coverage or chipping then releasing into the flats.

Before you get angry at Cam for missing him above, Keene is on the backside of the progression. He’s likely the fifth option in the read, and Newton is sacked within 2.5 seconds. But chipping on the backside before releasing into the flat was 80% of Keene’s routes last Thursday night. He only ran two routes with a cut at the top, and the rest were vertical clear-outs.

Although he’s wearing a fullback number, based on his usage, the Patriots are trying to transition Keene into a traditional tight end role even though he looks lost out there.

New England will either need to stay the course with Keene’s lengthy developmental process or go a different direction as more of an H-Back like he was in college.

If Asiasi develops into a starting-caliber tight end or the Pats acquire one this offseason, Keene’s role should resemble what he did at Virginia Tech.

For instance, 49ers fullback Kyle Juszczyk is a good archetype for Keene, who has a more expansive role than Pats fullback Jakob Johnson in the passing game.

Again, the sample size is tiny, but I’m just not seeing Keene as a traditional in-line tight end still.

The Patriots’ rookie tight ends are coming along slowly as the responsibilities, along with injuries in these instances, at a complex position typically lead to a gradual progression for young players.

Former Patriots tight end Ben Watson once told me that, outside of quarterback, tight end was the most challenging position to learn in the offense due to the blocking and passing-game duties.

Although probing the film for good reps will have to do, Asiasi is making progress, and it wouldn’t be a surprise to see him start producing as a receiver.