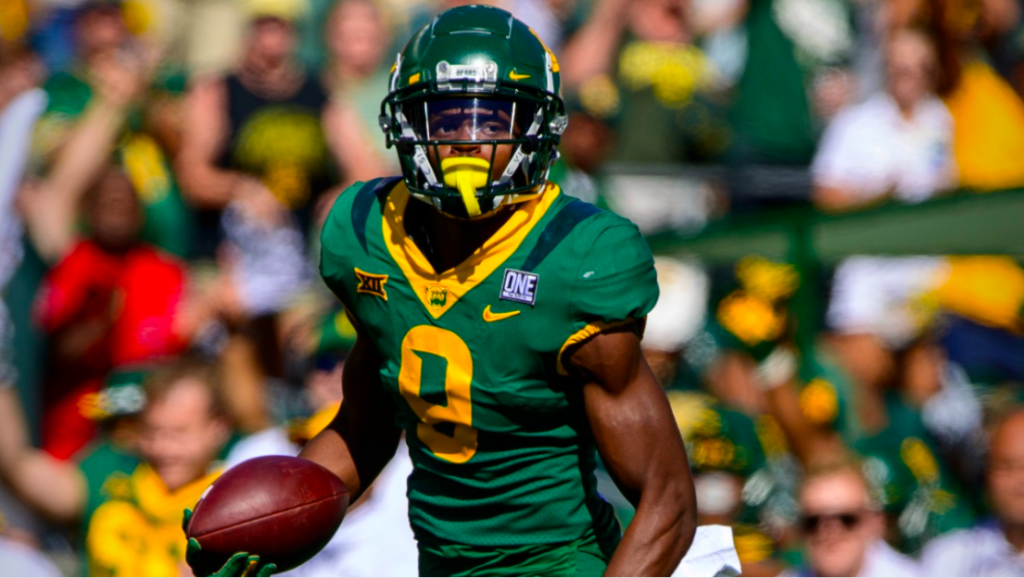 Evaluating a draft class before seeing the players on an NFL field is a flawed exercise.

We don’t know what any of these players will become, and we know better in New England to judge a book by its cover based on 20-plus years of finding diamonds in the rough.

However, there’s an underwhelming feeling amongst draft pundits and even scouts polled around the league about what Bill Belichick and company did over the last three days.

Based on the information we have on these players, which, again, are books still being written, the Patriots had a draft where they likely got on base a few times but didn’t hit any home runs.

Coming off a draft that included a franchise quarterback (Mac Jones), a star rookie pass-rusher (Christian Barmore), and a promising running back (Rhamondre Stevenson), the 2022 class hits differently than a year ago.

There’s logic to focusing on splitting the fairway rather than driving the green off the tee. Although the fairway shot is the safest route, there’s less risk.

But New England’s approach in last year’s draft received praise from owner Robert Kraft, who was critical of his team’s recent draft history, because it netted foundational pillars for a rebuilding organization.

When you are a rebuilding team, laying up isn’t good enough. The Pats need impact playmakers on both sides of the ball, and it’s hard to envision another multi-pillar draft here.

Obviously, the hope here and among all Patriots fans should be that the 2022 draft class proves us wrong, and we’ll more than welcome that as a possibility for a more optimistic view.

Still, instead of repeating their successful draft strategy from a year ago, Belichick was back to beating to his own drum in a way that hasn’t necessarily worked out in recent years.

Once the dust settled from a shocking selection in the first round, Strange was a tone-setter for the rest of New England’s draft strategy on offense. The Pats’ top pick posted a relative athletic score of 9.95 out of ten, running a 5.03-second 40-yard dash (90th percentile) while putting up 31 reps on the bench press (86th percentile). As Director of Player Personnel Matt Groh said, there aren’t too many offensive linemen with that blend of speed and strength.

The first tape I watched of Cole Strange was against Kentucky. Very first dive. Executed several different techniques to lead Chattanooga to a TD basically all on the ground. #69 at left guard. #Patriots pic.twitter.com/pDfiSdcSGF

Strange has noticeable explosiveness to move laterally as a run blocker (zone), pull or climb to the second level (gap), and mirror pass-rushers with excellent range in pass protection. Plus, he plays with a consistent toughness and motor that has to eat away at opponents. There’s a lot to like about Strange as a prospect. But he’ll need to develop into the next Logan Mankins for a significant return on investment.

Sticking with drafting elite athletes on offense, Thornton has the highest upside of any prospect the Pats selected in this year’s draft. They sought out speed, and with a 4.28-second 40-yard dash, Thornton was the fastest wide receiver at the NFL combine this year. Although he’s limited to a vertical route tree that consists of verticals (fades/posts/back shoulders), slants, and the occasional shallow crosser, Thornton’s timed speed translates into downfield separation.

Along with better-than-expected body control and impressive deep ball tracking, the most exciting aspect of Thornton’s game beyond his straight-line speed is his releases. Thornton has explosive and sudden lateral movements off the line to beat press coverage, which allows him to open up his strides to take off downfield. He’ll need to expand his route tree to become a prolific receiver at the next level, but his explosive releases and long speed are high-end traits.

Don’t let Jones’s size fool you. Although he’s only 5-foot-8 and 174 pounds, he plays much bigger than his size as an on-ball defender and forceful tackler in the open field. At corner, Jones has the foot speed and smooth hip transitions to mirror receiver in man coverage. He projects as a potential option to cover both shifty slot receivers and vertical slots, with a projected 40-yard dash time in the high-4.3s to low 4.4s. Despite limited length, Jones still managed to break up 31 passes and finished his career with nine interceptions. As a returner, Jones is electric, as an All-Conference returner with nine career touchdowns. Everything Jones does is explosive and fast. He projects as a four-down player and starting slot corner if he can overcome his size.

The former Sun Devil corner was the most predictable selection for the Patriots in this year’s draft. New England hosted Jones on a top-30 visit and met with him in Arizona. After transferring from USC due to academic issues and off-field legal troubles, Jones found his way to Arizona State. Clearly, the Pats liked the on-field talent with Jones, so they met with him multiple times to discuss the off-field issues that plagued him throughout his college career.

On the field, Jones is very impressive in coverage. He can mirror-and-match receivers in man coverage with fluid movements and often runs routes for the wideouts he’s covering. Plus, he has excellent closing burst and timing to break up passes, with ten career picks and 26 pass breakups. The Patriots feel they’re getting top-100 cover talent in the fourth round due to Jones’s off-field issues. They’ve had success with corners who dealt with similar hurdles as Jones, such as Malcolm Butler and J.C. Jackson.

The Patriots surprisingly double-dipped at running back on day three, but taking one running back wasn’t a surprise, and neither was the Strong selection. With Damien Harris in a contract year and James White working his way back from hip surgery, the Pats add depth at running back with another explosive skill player. Strong, like Thornton, posted the best 40-yard dash time at the combine at his position (4.37s) and had ten rushing touchdowns of 50-plus yards.

Along with his breakaway speed, Strong runs with excellent contact balance and eludes tacklers with quick jump cuts, tallying 811 yards after contact in 2021. Although it’s too high praise to make it our pro comparison, multiple scouts we spoke with compared Strong to LeSean McCoy. Don’t sleep on Strong’s ability as a pass-catcher, either, just because he only had 62 career catches. He has the athletic profile to develop into a receiving threat.

The Patriots using a top-150 pick on a quarterback took several league sources by surprise. However, Belichick drafted ten quarterbacks with Tom Brady on his roster, and the depth chart behind Mac Jones is uncertain. New England has 36-year-old Brian Hoyer and fourth-year QB Jarrett Stidham behind Jones, with Stidham entering the final year of his rookie contract. The Pats want depth at the most important position in football, and the clock is ticking on both Hoyer and Stidham for different reasons.

Zappe projects as a long-term backup due to his high football IQ, accuracy, timing, rhythm, and decision-making in the passing game. For those reasons, he’s also a good backup to Jones. The idea is to have a backup quarterback who resembles your starter, so you don’t need to change the entire offense if Zappe needs to play. His throwing motion is unorthodox, and his arm talent is poor, but the ball comes out on time and goes where it should.

New England selecting one running back wasn’t a surprise, but two running backs? Yeah, we didn’t have that one in our mock drafts. With Strong projecting as an explosive change-of-pace back, Harris fits the early-down mold as a traditional power back. At 5-foot-10 and 221 pounds, Harris runs with great power behind his pads and only has one career fumble. He’ll churn out the yards that are blocked, protect the football, and finish runs by pushing the pile. Sounds like a Patriots running back in the early-down role. Don’t expect anything special. That’s Strong.

Sam Roberts (6’5” 292) of @NWBearcat_FB knocks his block back into the RB, then pushes the RB into the QB. Ends up making the tackle!@samroberts133 won the 2021 Cliff Harris Award (small college Defensive POTY) @lvrgfootball @RossMikeJones #nfldraft

The Patriots now have two Cliff Harris Award winners on the roster, the DII Defensive Player of the Year award. Roberts joins Kyle Dugger as Cliff Harris Award recipients in New England, with 18.5 career sacks and 47 tackles for loss. Roberts’s standout traits are his length (6-5), leveraging and pad level, and upper-body strength allow him to lockout and shed blockers. Although Roberts doesn’t have a great first step, he uses his length effectively and dominated at the DII level. It’s worth a flier at this point of the draft.

Drafting offensive linemen late on day three is becoming a tradition in New England, and they’ve had success doing it in the past. Hines is another interior offensive lineman who fits the mold that the Pats have “hit” on in the past. Although he’s built like Mike Onwenu (6-3, 327 pounds), Hines’s playing style resembles Shaq Mason. He’s an explosive puller on power and counter schemes. You see him generate legitimate power and square up defenders on the move as a lead blocker several times a game. Hines can drop anchor in pass protection, but he’ll need to refine his hand technique and awareness on stunts. Plus, he had issues with his weight and nagging injuries at LSU. Hines will be a steal if he puts it all together.

Andrew Stueber vs Logan Hall. Stueber is having a great first day pic.twitter.com/FGMMq057Xi

Another good late-day three fit on the offensive line, Stueber is a massive right tackle prospect who was a consensus mid-day three value. He slipped through the cracks a bit here, but there’s a lot to like still. At nearly 6-foot-7 and 325 pounds, Stueber is a people-moving right tackle with good awareness and timing. Although he will get beat around the corner in pass protection, the Pats have coached around Stueber’s limitations in the past, and he’ll fit right in with New England’s downhill rushing scheme.