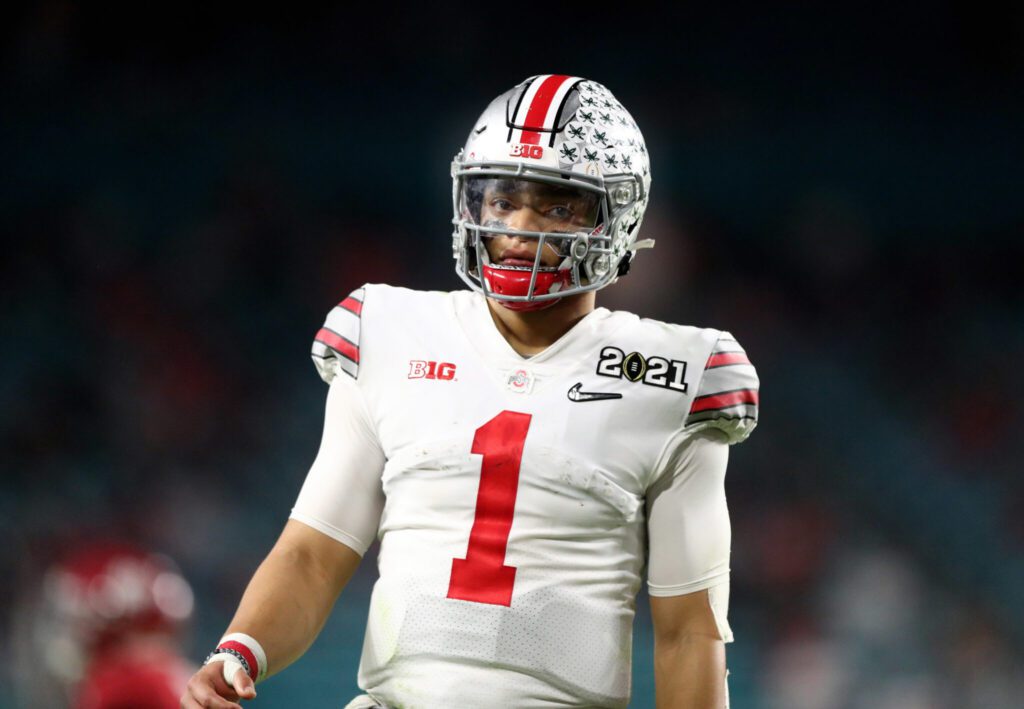 The Patriots’ makeover in free agency had one primary objective; make the roster a quarterback away from a contender.

Over the last two seasons, New England didn’t give its quarterbacks the necessary help to be productive on offense. With Hunter Henry and Jonnu Smith as the headliners, the Pats gave their current quarterback in Cam Newton and QB of the future the weapons to succeed.

Now our attention turns to April’s NFL Draft, where the quarterback of New England’s future will most likely come from after a bland trade market and group in free agency.

Fields is a tremendous talent with excellent accuracy, arm talent, mobility inside and outside the pocket, and makes plays both within structure and operating after the play breaks down.

According to SportSource Analytics, Fields was ninth in the country in completion percentage over expected in 2020 (+11.7). He wasn’t throwing check-downs all game either, averaging 10.4 yards air yards per attempt with a big-time throw percentage of 7.8 (7th in FBS), per PFF.

Although it could just as easily be smoke as it could be fire, it’s worth entertaining the idea that the Pats could trade up to draft Fields. He’s worth it talent-wise, but he has his flaws like any prospect.

First, let’s review the many positives of Fields’s game, starting with his downfield accuracy in an advanced passing system.

Fields operated in an offense that asked him to go through full-field reads and make post-snap adjustments based on the coverage, so it’s a very NFL-like passing scheme.

The former Buckeyes quarterback is as accurate of a deep thrower as any in this class. Above, Fields moves the backend of Clemson’s secondary by staring down the right side of the field in his drop. When the two safeties over the top flow towards Fields’s eyes, he side-steps pressure and hits wide receiver Chris Olave on a backside post route for a 56-yard touchdown.

Here’s another deep-ball dime. This time, Ohio State runs a double move into the boundary, and Fields catches the deep safeties in their coverage rotation. The play-side safety is rotating down while the backside safety rallies into the deep middle, leaving the boundary corner one-on-one with Fields’s intended target. Fields gives a pump fake to sell the double move, then lays it out there for his receiver and hits him in stride as he’s falling into the end zone for six.

On this deep throw, Ohio State is running a full-field concept called “Y cross” which gives the quarterback a middle of the field read. When the safety in the deep middle stays down to help on the crosser, Fields knows he has the deep post out-leveraging the backside corner. He subtly moves in the pocket to find some breathing room, and delivers a great on-time throw for a touchdown.

Along with excelling on the deep ball, Fields can also uncork drive throws into tight windows.

In this play, Fields is going to hit his “rhythm” throw in the progression. His initial read is to the “smash” side, where the corner-curl combination is covered by the two-deep look, giving the defense three-over-two to the smash side. Knowing it’s a split-safety coverage, Fields gets his eyes back to the opening in the middle of the field, where his backside slot receiver is winning a foot race against a linebacker matching him up the seam. Fields gets his eyes and feet to his third option in the progression and throws a dart into a tight window. Out of all the passes I saw Fields throw last year, this was his best in terms of process and ball placement.

In his stock-cementing game against Clemson in last year’s Sugar Bowl, Fields’s first of six touchdown passes put his arm strength on display. Ohio State is operating out of a “nub” formation to Fields’s right, which helps Buckeyes tight end Luke Farrel leverage his route. Farrell widens in his release to get the corner to sit outside of him, then levels off up the seam, and Fields rips a fastball between two defenders a few plays after breaking his ribs.

The last aspect of Fields’s game as a passer that stands out is his thoughtful ball placement that protects his receivers from oncoming defenders looking to challenge at the catch point.

Here, Fields feels pressure coming up the middle as he carries out the play-action fake. He buys himself some time by rolling out of the pocket, and with pressure in his face, he still throws to his receivers’ outside shoulder on the vertical route so his wideout can shield the catch point from the oncoming defender.

Here’s a similar-looking play where Fields operates on a designed quarterback rollout and places the ball perfectly away from the defender to hit the wheel route going up the sideline.

Although nitpickers will bring up the fact that Fields threw to open receivers on 81.3 percent of his passes, his accuracy and arm strength to all three levels is never in question.

Fields was deadly-accurate throughout his collegiate career with easy arm strength and a natural throwing motion. Plus, he has outstanding running ability on designed runs and scrambles, which adds even more playmaking to an already big-time playmaker as a passer.

Combining an adjusted completion percentage that was the second-best in the nation with an elite running quarterback is just unfair, even if he needs to improve in certain ways mentally.

Before we get into areas where Fields needs to improve, let’s debunk some lazy narratives about his game that are surfacing during the pre-draft process.

First, those that are questioning Fields’s work ethic are not even worth entertaining as evaluators. Speaking to two of his coaches at Ohio State, both assured me that they would never question his drive or the hours that he put into football for the Buckeyes.

Second, the “one-read quarterback” narrative is also lazy and misguided. As we showed above, he routinely made throws past his first read and has a good understanding of progressions.

Fields’s main issues are that he is too trusting in his arm strength and has some issues reacting to post-snap rotations by the defense, which when put in proper context, are very reasonable for a young quarterback entering the NFL.

This is what every OSU play looks like. So when it looks like the QB is taking too long to read the progression, it’s actually the receivers who take too long deciding what they’re going to do. More later. pic.twitter.com/Ds0pEga0MW

In Ohio State’s offense, most of their play calls feature options routes that take a while to declare their intentions downfield. When receivers take too long to decide, it makes it look like the quarterback is holding the ball in the pocket.

Fields certainly held on to ball for awhile at times, and his average time to throw of 3.11 seconds backs that up, but some of it can be explained away by Ohio State’s system.

New England, of course, runs a timing-based passing system predicated on quick decisions by the quarterback, and currently, Fields isn’t the best stylistic fit for that kind of scheme.

In order for Fields to master that kind of scheme, he needs to cancel out receivers early on in his progression when the coverage takes them away faster, and make decisions based of what the defense is showing him after the snap.

Fields can certainly be coached up to improve as a processor, though, and his natural gifts are so enticing that it might be worth tinkering the scheme while Fields develops.

In this play, Ohio State is running a basic snag concept to Fields’s left. Fields reads the boundary corner to his far left. If that corner sits, he’s going to work corner to flat. If that corner drops, he’s going to work snag to flat. In this instance, the corner stays down, so Fields properly gets on the corner route. But the rest of the defense doesn’t do what he’s expecting them to do, leading to an errant throw. Instead of passing off the corner route, the inside linebacker carries the corner and essentially brackets the receiver with the deep safety, leaving the snag wide open. Instead of reacting to the defense, Fields’s pass is nearly intercepted when he throws the corner route and passes up the wide-open receiver underneath.

Clemson confuses Fields with an exotic post-snap coverage rotation. Fields wants to work the comeback route to the left sideline, but the zone-dropper falls underneath the route taking away the passing lane. Instead of moving on to the backside of the progression, Fields holds the ball in the pocket and then takes off running. If he cancels out his primary read faster and gets to the backside of his progression, Fields has a chance to hit both the receiver splitting the safeties and the open receiver on the right sideline.

On the one hand, Fields is special with the ball in his hands when he takes off running. But on the other hand, he can avoid taking hits with better processing there.

Fields can learn to turn his back to the defense off under-center play-action, which is a big part of the Patriots’ scheme, but he’s more of a shotgun or pistol quarterback.

From a stylistic perspective, Lance or Mac Jones are more natural fits for the Patriots in this year’s draft than Fields. But that doesn’t mean you can’t alter things to Fields’s strengths.

The top-ten lock in April’s draft is oozing with natural talent, and he’s a passer first, not a runner. Deciphering where he’ll land in the draft order depends on where each team has the top four quarterbacks slated. Fields could go as early as second overall to the Jets, which would take the Pats out of the running, but a trade up to six or seven isn’t totally out of the question (would likely take at least no. 15, 2022 first-rounder, and another future pick in the first three rounds).

If the Patriots move up to draft Fields, it likely means they plan on him sitting behind Cam Newton for a period of time or that they are moving away from their old scheme.

The latter might not necessarily be a bad thing for the Patriots moving forward since it’ll be challenging to replicate Tom Brady’s processing speed, and Newton is the perfect bridge to Fields.

Still, if the Patriots are going to mortgage the future to trade up in the draft for a quarterback, you’d like them to marry that player to their scheme a little better than it would be with Fields.