Lazar: Examining the Patriots’ Options to Replace Dont’a Hightower After Linebacker Opts Out 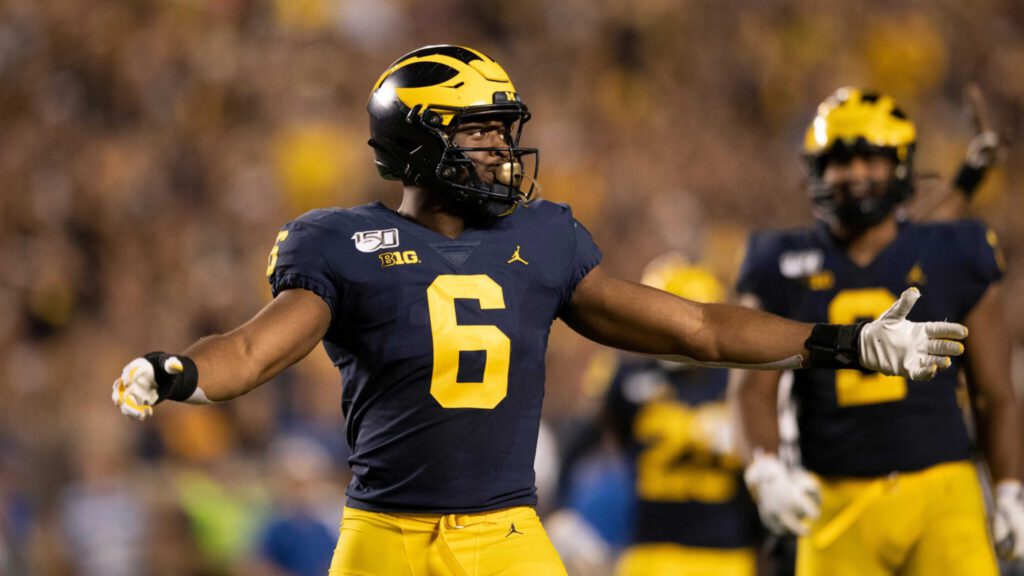 The Patriots now have six players that are planning to opt-out of the 2020 NFL season, as players decide how to proceed amidst the ongoing coronavirus pandemic.

Among those players is a critical component to three championships over the last decade, starting linebacker Dont’a Hightower, a massive blow to New England’s front seven.

The contracts for all six players will now toll, meaning they carry over to next season, giving the Patriots cap relief in 2020 while keeping all six players on the 2021 roster.

Hightower, who is by far the biggest blow to New England’s hopes for a seamless transition in the post-Brady era, is opting out due to his son’s recent birth.

The two-time Pro Bowler was the league’s top linebacker in Pro Football Reference’s approximate value metric season ago with a position-high 33 quarterback pressures.

According to Football Outsiders, the Patriots’ net approximate value change after key departures in free agency defensively, mainly linebackers Kyle Van Noy and Jamie Collins, was already the most significant loss for a defense in the last 17 seasons.

With Hightower now opting out of the season, the Patriots are losing their three most impactful front seven defenders from their dominant 2019 season. Their playmaking behind the line of scrimmage will not easy to replace by one player currently on the roster.

The Patriots intercepted a league-high 25 passes aided by the highest quarterback pressure percentage in the NFL, a turnover rate that was likely to regress even before the Hightower news.

Plus, Hightower’s versatility to play all three primary alignments in New England’s scheme for linebackers takes an enormous amount of football intelligence and skill that’s not easy to replicate.

The Patriots need some blue-chippers in the front seven, fast, or their ability to impact the quarterback with pressure and make splash plays in the backfield will take a significant step back.

The silver lining for the team is that the Patriots will receive a credit on the salary cap they can use to sign and trade for veteran players to replace those who are opting out of the season.

According to cap wizard Miguel Benzan (@patscap), Belichick has over $24 million to play with now. There are some notable free agents still available due to the slow nature of free agency this offseason.

The most likely scenario is that Belichick will carry most of his cap space into the 2021 season due to the plummeting coronavirus-impacted salary cap. Although it’s fun to theorize about big names, signing players for close to the veteran minimum is more Belichick’s style.

Here are the in-house candidates to replace Hightower and moves the Patriots could make to fill the void left by one of their best players opting out of the season:

The Patriots were already counting on John Simon, Ja’Whaun Bentley, and second-year linebacker Chase Winovich to step into larger roles this season.

With Hightower out, the Pats will need to call on another layer of depth and rookies Josh Uche and Anfernee Jennings need to grow up fast in an abbreviated training camp.

Josh Uche: The good news is that the second-round pick out of Michigan can play multiple spots on the defense, both on and off the line. The bad news? Uche only played 667 career snaps for the Wolverines as a one-year starter. He has tremendous upside as pass rusher and standup inside linebacker that plays the game with great speed and initial burst off the line. Uche could help replace some of Hightower’s production as a pass rusher, generating pressure on 23.3 percent of his pass-rush reps in his final collegiate season, and was an extremely effective blitzer over the guards as well. But as an undersized defender, he’s not known for his early-down edge setting abilities. In run situations, Uche will convert to off-ball linebacker to cover a lot of ground both in the run game and in coverage. As many scouts noted before and after the draft, Uche is a rising star with tons of physical upside once he refines his game with more playing time.

Anfernee Jennings: Jennings’s skill set differs from Uche’s quite a bit. The Alabama product is more in the Van Noy mold as a true edge defender on the line of scrimmage. At 6-2, 256 pounds, and a sturdy build, Jennings projects as a prototypical Belichick edge setter that can hold up against tackles and tight ends in the run game to force ball carriers back inside to the strength of the defense. The Pats rookie started multiple seasons in a big-time program, and under Nick Saban, a lot of the defensive schemes he ran at Alabama are similar to what the Patriots will ask of him. Out of the two rookie linebackers the Pats selected on day two, Jennings was always the more pro-ready player due to his experience and strong fundamentals. He’s a true strike, leverage, shed, and tackle edge defender. We’ll see if he’s ready for a significant role in year one.

Brandon Copeland: In the Football Outsiders study mentioned above, Copeland’s 2019 approximate value didn’t register as a net gain for the Patriots. But the veteran free-agent addition might be in a for a larger role than expected. The former Jets and Lions defender can wear many hats playing both on and off the line throughout his career as well as on special teams. Copeland’s calling card is his versatility. He cycled through many roles with the Jets a year ago, including some intense coverage responsibilities as a low hole defender and safety at times in exotic coverage rotations. Copeland is probably at his best rushing off the edge, but the Pats might need his experience at inside linebacker more than edge defender. Either way, he’s the type of under-the-radar signing that figures to have a significant role this season.

Derek Rivers: Yes, Derek Rivers is still under contract with the Patriots. The 2017 third-round pick spent the last two seasons on injured reserve and was underwhelming in camp last summer. Rivers has the get off and quickness to be a useful pass rusher, but his body control and rush plan diversity are lacking. Too often, Rivers goes to his speed-to-power move that gets swallowed up by NFL tackles, and he doesn’t have a good enough counter move yet to offset his good first-step quickness. For Rivers, developing another rush move and perfecting his timing and hand placement as a pass rusher will decide his fate. If he’s underwhelming in camp again, he might be done in New England.

Jadeveon Clowney: We’ve already discussed the possibility of Clowney joining the Patriots earlier this offseason, and with more cap space now, the move makes even more sense. Clowney is the exact type of player that the Patriots need as a force in the front seven that’s one of the league’s best run defenders. Like Hightower, Clowney can line up anywhere on the line of scrimmage, set the edge, and disrupt the quarterback at a high rate on stunts and other schemed pressures. Plus, he played in Romeo Crennel’s scheme for years in Houston, which has plenty of carryover to the Patriots defense. Due to a list of injuries and declining sack totals, Clowney is still a free agent that could be seeking a one-year deal to reset his market. If that’s the case, he’s the perfect stop-gap for Hightower.

Yannick Ngakoue (trade): After signing his one-year franchise tag at $17.788 million, Ngakoue is the least likely player in this post to end up in New England, but hear me out. First, the Patriots absolutely loved Ngakoue in the 2016 draft, and Belichick is still kicking himself for taking Cyrus Jones nine picks earlier. The Jaguars pass rusher is a force, as his athletic ability has combined nicely with developing skill as a pass rusher, making him one of the best players at his position in 2019. Along with the steep franchise tag money, the Pats would also need to give up hefty draft capital to acquire Ngakoue, maybe even a first-round pick, which seems unlikely. But maybe Belichick wants to get the 2016 draft right while also adding immediate pass-rush help that his defense desperately needs.

Everson Griffen: Another draft what could have been, the Patriots showed a lot of interest in Griffen before the 2010 draft but ultimately selected wide receiver Taylor Price ten spots before the former Vikings Pro Bowler. Griffen is more of a 4-3 end then a standup outside linebacker or 3-4 end, so maybe it’s not the best scheme fit, but he’s a savvy veteran with four Pro Bowls on his resume and smart approach to pass rushing that the Patriots want. He’ll set the edge, push the pocket, and won’t lose contain with his pass rush moves, but can still put tackles in a bind when he wants to pin his ears back. Griffen was too costly for the Pats early on in free agency, but his price dropped, and the Pats have some wiggle room to make it happen.

Darron Lee: Lee is a pure off-ball linebacker who could provide depth at that spot now that Ja’Whaun Bentley is at the top of the depth chart. Belichick loves first-round reclamation projects, and Lee went 20th overall to the Jets as an athletic freak and physical inside linebacker out of Ohio State. With a 4.47 time in the 40-yard dash, the 232-pound Lee looked like the perfect coverage linebacker for today’s NFL. Lee was decent for the Jets in 2017 and 2018, but a down year in 2019 made declining his fifth-year option an easy decision. Speed and effort aren’t Lee’s issues, but mental processing and playing under control were at times. Although he’s a little undersized for a Pats linebacker, Lee could step in right away to play next to Bentley on early downs.

Nigel Bradham: At 6-foot-2, 242 pounds, Bradham fits the Patriots’ mold for off-ball linebackers better than Lee but is still an above-average athlete. Bradham is a physical and reliable tackler with good speed that played well for the Eagles during their championship run in 2017. He’s a big-game player that was also on the big stage during his time at Florida State. The big knock on Bradham dating back to his college days is his slow play recognition and mental processing, but he made some strides in that regard during his time in Philly. Bradham was on my radar in free agency a few years ago due to his physical playing style. With the Patriots lacking experienced linebacker depth, now might be the time to bring him in.