Lazar: Examining the Patriots’ Options to Replace Marcus Cannon After Tackle Opts Out 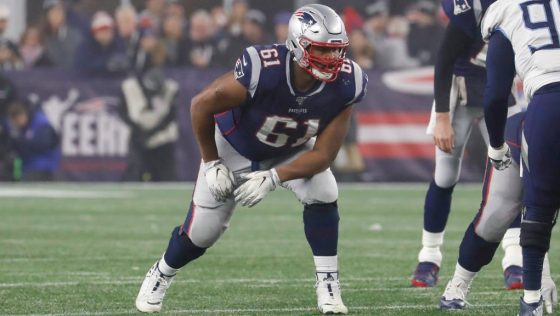 The Patriots now have six players that are planning to opt-out of the 2020 NFL season, as players decide how to proceed amidst the ongoing coronavirus pandemic.

Among those six is a critical component to three championships over the last decade, starting right tackle Marcus Cannon, who will sit out after contemplating retirement all offseason.

The contracts for all six players will now toll, meaning they carry over to next season, giving the Patriots cap relief in 2020 while keeping all six players on the 2021 roster.

Cannon decided to opt-out as a high-risk cancer survivor after winning his battle with non-Hodgkin’s lymphoma in 2011. But there was talk all offseason of the 32-year-old retiring from football, and a source indicates that this might be it for Cannon in the NFL.

Due to several cap-saving maneuvers over the years, Cannon’s $9.6 cap number was an overpay given his level of play last season, where his effectiveness waned during the year.

Cannon still flashed power at the point of attack as one half of a menacing people-moving duo alongside right guard Shaq Mason. The two regularly blew defenders off the ball on double teams. But his foot speed in space and ability to hit his set points in pass protection took a step back, and his 70.1 overall grade was his lowest since the 2015 season.

Recently, offensive line guru Brandon Thorn ranked Cannon in tier four out of six among starting right tackles. Serviceable, but average, and probably not worth his cap hit.

Still, Cannon was a steady veteran that you could pencil in as a starter every year, and in an offseason of both personnel and coaching turnover, the situation is not ideal for New England.

The Patriots need a reliable starting five to help whoever is under center this season. Their experience up front was going to make things easier without retired offensive line coach Dante Scarnecchia. Although, they were prepping internally for Cannon’s eventual retirement.

New England has a strong in-house candidate in 2019 third-round pick Yodny Cajuste, and could also move franchise-tagged left guard Joe Thuney to tackle where he played in college. But they were reluctant to do so last year, opting for continuity instead.

If the Patriots were willing to roll with Marshall Newhouse instead of moving Thuney to left tackle, that tells you they probably will keep their veteran left guard where he is this season.

There’s also the possibility that the Patriots could use their $24 million in cap space created by veterans opting out of the season to sign or trade for veteran tackle depth.

Although Cajuste is the early favorite to win the job, adding an experienced tackle option seems like a formality; the Patriots need bodies.

Here are the in-house candidates to replace Cannon as well as moves the Patriots could make to fill the void left by their starting right tackle opting out of the season:

First thing that stands out with West Virginia OT Yodny Cajuste is his explosiveness off the ball and depth in his pass set. Look at how much further back he is than the rest of the OL. Allows him to easily cut off angles and remain patient to react. #NFLDraft pic.twitter.com/pm5d30I3Pa

Yodny Cajuste: At the top of the list to replace Cannon, the 2019 third-round pick out of West Virginia could find himself in a starting role before he even takes part in an NFL practice. Cajuste sat out his entire rookie season, never seeing even the practice field following offseason quad surgery, but he’s ready to go for camp in year two. Although he has a bit of an injury history, Cajuste had top 50 tackle tape in his draft class with terrific upper-body strength, hand power and usage, and decent foot speed for a tackle that packs a mean punch. In college, Cajuste was in an air raid system that didn’t ask much of its tackles in pass protection due to the types of throws in the offense. But he was one of the Big 12’s best pass protectors from a statistical standpoint and jolted defenders off the ball with his power. We’ll see how he looks once the pads go on, but Cajuste was drafted to replace Cannon, just a few years down the road.

Korey Cunningham: Cunningham only appeared in one game for the Patriots last season after the team traded a sixth-round pick to Arizona for the former seventh-rounder last September. The former Cardinals tackle started six games at left tackle for Arizona last season and flipped over to right tackle during the 2019 preseason. He tested in the 96th percentile at the NFL scouting combine in 2018, clocking in at 4.90 seconds in the 40-yard dash with a 36-inch vertical at 6-foot-6, 311 pounds. Cunningham committed to the University of Cincinnati as a tight end before converting to tackle and has a lot of physical upside. However, in his six starts with Arizona, Cunningham allowed 18 quarterback pressures and received a 60.4 grade from Pro Football Focus, not great. Evaluating his tape, Cunningham is explosive off the ball and strong. But he struggles to change directions, his feet are a bit heavy, and his body control needs to improve. If Cunningham can figure out how to control his frame and move at the same rate as he did before, he can start in the league.

Justin Herron: The Patriots immediately announced the sixth-round pick as a guard despite playing at tackle for most of his career at Wake Forest. Although there are concerns about play strength and his ability to anchor against NFL pass rushers, Herron has the foot speed, redirect skills, and hand usage to stick on an NFL roster potentially. The move to guard stems from a smaller frame for a tackle, and the athletic upside of sliding him inside where the Patriots like to have high-level pass protectors on the left side, even in the interior. Herron’s odds starting in his rookie season are long, and that’s not a situation the Patriots want, but he’s an option if they need him.

Demar Dotson: Dotson is a massive (6-9, 320 pounds) people-moving right tackle that fits the mold of a Patriots offensive lineman, but he suffered a season-ending knee injury and missed the final five games of the 2019 season. If he’s healthy, he’s the best tackle on the market. Entering the league as an undrafted free agent, the 34-year-old was an above-average starting right tackle for the Buccaneers for the better part of the last decade. Over the last two seasons, Dotson has started to show his age, but he’s still a physical presence that ranked 31st out of 82 tackles in Pro Football Focus grade in 2019. He could be a serviceable stop-gap for one season.

Cordy Glenn: Glenn was once one of the top tackles in the league, grading out as a great pass blocker throughout his career and a solid run blocker. He has suffered several injuries over the last few seasons and hasn’t been the same player, posting two of his worst seasons with the Bengals since a trade to Cincinnati in 2018. Still, he’s a veteran who can be a high-level pass protector on the right side if healthy.

LaAdrian Waddle: Patriots fans will remember Waddle from his four years with the team. He suffered a season-ending quad injury during the 2019 preseason but played in New England in 2018. Waddle was a decent pass protector during his time with the Pats, showing the lateral mobility to slide with pass rushers and mirror them with modest effectiveness. Although he isn’t much of a people over, Waddle’s experience in the system with the pandemic time crunch might benefit him as a backup swing tackle. We wouldn’t advocate for Waddle to start at right tackle this season, but the Pats could do worse in terms of depth.

Marshall Newhouse: Before you moan and groan about the idea of Newhouse starting for the Patriots again, it seriously wasn’t that bad. Newhouse’s lack of burst out of his stance and lagging foot speed made him one of the worst pass protectors in football, ranking 49th out of 58 qualified tackles in pass-blocking efficiency. But he was 53rd among 82 eligible tackles in overall Pro Football Focus grade. Newhouse was definitely in the bottom tier at his position, but his high football IQ and experience helped him earn the starting job at left tackle with very little practice time to learn the system. It was a tough position to replace Isaiah Wynn last-minute, so maybe things would go better for Newhouse in year two. Ideally, the Pats would look elsewhere or go with their in-house candidates. But Newhouse is still a free agent if they need him.