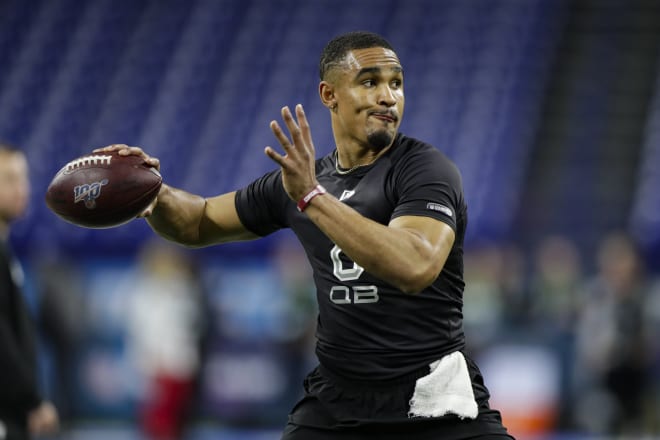 The 2020 NFL Draft class, which has the league buzzing about certain position groups, made its case to NFL general managers, coaches, and scouts at the scouting combine.

Based on my view and understanding of the league’s view, we are looking at potentially historic returns at quarterback, wide receiver, and along the offensive line in this draft.

And although there are a few weak spots, such as tight end and edge defender, the rest of the class is filled with a dealers choice of skill sets and versatility that makes the draft exciting.

For the Patriots, we discussed potential fits at wide receiver and tight end last week, which you can find here, but we got an extended look at the defensive side of the ball over the weekend.

Despite New England’s desire to surround Tom Brady with an improved supporting cast, there’s a roster to build and holes to fill defensively.

Below are some thoughts from over the weekend on potential Patriots fits, and one leftover from the quarterback workouts:

1. Is Jalen Hurts a Quarterback Option For Patriots?

Hurts had a great week in Indy impressing teams with his football knowledge and confidence, elite athleticism, and significantly improved footwork in his drops. Hurts’s inconsistent lower-body mechanics led to some ball placement and accuracy issues as a thrower in college, leading Lincoln Riley and the Oklahoma staff to reworking his lower half. Now Hurts is throwing from a consistent platform with great timing and power.

"I don't see him getting out of the 2nd round."@MoveTheSticks likes what he sees from @JalenHurts 👇

At the combine, Hurts made several great throws, including the first go ball dime in the clip above. Hurts’s feet are smooth, his timing in his drop is perfect, and you see how much power he gets out of his hitch step to put that into the throw down the sideline. Hurts had arguably the best feet and drops of any quarterback that threw at the combine.

As for the Patriots, their interest in Hurts remains a mystery, but they’ll need to fall in love quickly and potentially make a move up to land Hurts before he’s off the board.

As Daniel Jeremiah said on NFL Network’s broadcast, the feeling around the league is that the former Alabama and Oklahoma quarterback won’t make it out of the second round.

Hurts has the mental makeup of a Patriots quarterback, and the scheme fit isn’t as far off as you’d expect, but teams will highly covet him come in April.

Entering the combine, Baun was a top 50 player with terrific tape both off the ball and as an on-ball edge defender, and his great athletic profile puts him in the first-round discussion.

Zack Baun is a LB prospect in the 2020 draft class out of Wisconsin.

According to the RAS, an athletic testing metric, Baun had an excellent workout in Indianapolis with great size, speed, and agility at the linebacker position.

On the tape, Baun shows great pass-rushing skills as a standup outside linebacker. He has the short-area quickness and length to beat bigger tackles with finesse moves and enough power to set the edge against the run.

Baun also has the athleticism to drop into coverage, flashing some impressive ball skills as well for a linebacker.

The Patriots could be in the market for a Kyle Van Noy replacement if he leaves in free agency, which is a reasonable assumption, and Baun is a hybrid edge in the same mold.

The Wisconsin linebacker mentioned Van Noy as a role model for hybrid players coming up through the college ranks, such as himself.

3. Does Neville Gallimore Fit the Patriots’ Scheme to be a First-Round Target?

The Oklahoma defensive tackle ran a 4.79-second 40-yard dash at 304 pounds and put in some excellent drill work as well, showing his smooth change of direction skills.

4.85u for Neville Gallimore isn’t surprising. Watch how twitchy he moves and how hard he plays. pic.twitter.com/2JFv85bmWZ

Gallimore is clearly athletic with the hip fluidity and footwork to transition his weight in any direction, which is extremely rare for a player of his size and shows up on tape plenty.

As a backend of the first round guy, and with a potential need on the defensive line, Gallimore will come off the board in the Patriots’ vicinity and could end up in New England.

However, he fits best as an A or B-gap penetrator and not in a two-gapping system, which does give you pause in terms of fit in Bill Belichick’s defense. But he plays through the whistle with all-out effort, is versatile enough to play multiple alignments, and if he can fix his pad-level issues, he’ll hold up blockers better in a two-gapping defense.

Gallimore isn’t Belichick’s usual cup of tea as an interior defensive lineman, typically they go for the Malcom Brown types, but the Patriots haven’t had a playmaker like Gallimore on the interior in awhile.

4. C.J. Henderson and Not Ruling Out All First-Round Possibilities

And in a passing league, you can never have too many elite cover corners, which brings us to Henderson.

As the highlights of his workout show, Henderson is a stud. He moves with the insane fluidity and speed that make him an ideal man coverage corner, stealing the show in the DB drills while posting an elite RAS with a 4.39 in the 40-yard dash.

A defensive backfield with Gilmore, Henderson, Jon Jones, and JC Jackson sounds crowded, but it also sounds like a shutdown secondary that would pace the Patriots next season.

Henderson will likely hear his name called before the first round gets to New England, but he’s going to be one heck of a player, and you never turn those guys down to address a need.

5. Minnesota’s Antione Winfield Jr. Is My Guy at Safety for the Patriots

We discussed the Patriots’ potential need at safety throughout combine week, and Sunday’s workout for Antione Winfield Jr. put him over the top in my rankings.

The Minnesota defensive back is undersized at only 5-9 (first percentile) and 203 pounds (31st percentile), but he checks all the other boxes. Winfield has the range (4.45s), smoothness in his pedal, hip transitions, instincts, and ball skills that will make him a fantastic deep safety at the next level, either in centerfield or split-safety schemes.

Minnesota's Antoine Winfield Jr. clocks a 4.48u in the 40-yard dash, a great number for him. He's a fun player with great ball skills/instincts.pic.twitter.com/4FozBFTl3O

He also displays excellent ball skills to track the deep ball and high point and is willing to step up in run support and can offer some flexibility to cover tight ends.

Based on his athletic profile and tape, Winfield is a first-round talent, but those pesky measurables may push him down to day two. If they do, the Patriots should pounce.

Both Southern Illinois’s Jeremy Chinn and Lenoir-Rhyne University’s Kyle Dugger made themselves some money on Sunday with their workouts.

Out of the two, Dugger has better film, and will likely go higher in the draft. Despite a substantial leap in competition, he could be a top 50 pick given his tape and athletic profile.

Dugger posted an elite RAS with a 4.49-second 40-yard dash and near-record breaking results in the vertical and broad jumps, where he jumped 42 inches in the vert and 11 feet in the broad.

The Division II product offers fantastic versatility with experience at safety, corner, kickoff and punt returner, and even running back. He’s an under control alpha-hitter with the willingness to fill against the run, and at the Senior Bowl, he was fantastic in one-on-ones against tight ends.

My goodness. Here's a taste of Safety Kyle Dugger's athleticism. Look at his balance and footwork as he braces for contact and spins out of it…INCREDIBLE pic.twitter.com/Wb2kDG2XLZ

On the play above, Dugger fills his gap against the run, avoids a blocker, and spins into the cornerback’s hole to clean up a missed tackle, keeping the ball carrier to a short gain.

As mentioned above, here he is putting the straps on a tight end during one-on-ones at the Senior Bowl. His physicality throughout the rep is noticeable as he leans on the receiver and makes him feel him, but even more impressive is the lateral agility to mirror the release and anticipation to stay over the top of the route.

Dugger is a little stiff in hips and will make a massive leap in competition from DII to the NFL, but all the tools are there for an impact box safety at the next level.

As for Chinn, he also posted an elite RAS with an excellent 40 (4.45s) and performance in the jumps. His instincts and knowledge of offensive schemes are a work in progress, but he has excellent range, ball skills, and man coverage skills.

Belichick will look for ways to improve his team from anywhere, and we saw that just last week, when he made a pit-stop at Middle Tennessee, so he’ll easily take a chance on a DII or FCS prospect.