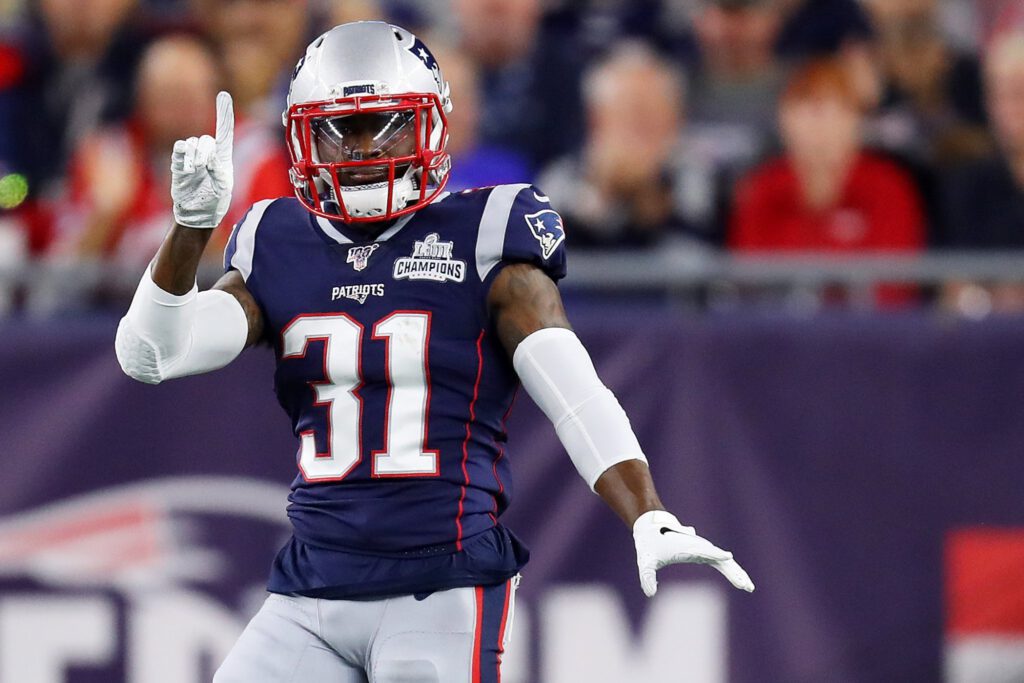 Patriots cornerback Jonathan Jones has built up to this point from the start of the offseason program, training camp and even back to being an undrafted free agent in 2016.

Two weeks ago the Patriots rewarded Jones for a strong training camp and end to the 2018 season with a three-year contract extension worth up to $25 million with $13 million guaranteed.

Against the Steelers and Dolphins, opposing quarterbacks only completed 46.7 percent of their passes into his coverage with a 58.8 passer rating.

As noted before, we’ve been building up to this with him for some time now. Jones has always had the ability to be a four-down player.

In 2017, Jones played 365 snaps at slot corner and another 306 snaps in the kicking game before an ankle injury ended his season in the playoffs. Jones spent the 2018 offseason rehabbing from surgery but this offseason he was injury-free and a full go.

Fellow cornerback Jason McCourty pointed out the healthy lead-up to the 2019 season for Jones in a conversation in the Patriots locker room on Wednesday.

“From my experiences with him, I feel like he’s been healthier this year,” McCourty said. “When I got here last year in the summer, he was here rehabbing continuing to get his foot right from the surgery the year before. Now this offseason, there’s no rehab, and it’s just about building and getting better. ”

Jones agreed with McCourty twin #2 saying, “completely, it’s night and day. Getting back to running around and flying around consistently, just being healthy. Any time you can do that, the healthier you are, the better you’ll be.”

“Jon’s really worked hard since he’s been with us. He started primarily in a special teams role, and then that expanded to some situational things on defense to really our nickel corner to safety,” Belichick said. “He’s just continued to expand his role for us defensively, which has given us more flexibility, and we’ve been able to find more opportunities to get him on the field.”

“He’s a smart, tough and dependable football player,” Pellegrino added. He puts a lot of extra time into his craft. I admire what he does. He’s great to work with.”

Last February, the Patriots installed a game plan that held the top-ranked Los Angeles Rams offense to three points that featured Jones in a new role.

Jones played 17 snaps at free safety, and the week of practice leading up to the Super Bowl was the first time the Patriots asked him to play there. But Belichick knew he could do it because of his work ethic and knowledge of the system.

“He’s a smart kid, he works hard and has good instincts and has a good understanding of our defensive system, so it allows him to do a lot of different things for us,” Belichick told me.

Jones said he had confidence going into the game after, “having a good week of practice at it listening to other guys like Devin [McCourty] that have done it for years getting tips from those guys, Duron [Harmon], just going out there and competing.”

“I always tell him to play similar to the way I play because of his speed and quickness, and he has more of that than me in both situations,” Patriots defensive captain Devin McCourty said. “Just try to play to that strength and not try to play what someone might say a safety should play like because that isn’t your skillset. I’m always telling him to do things differently than maybe even me, Pat [Chung] and Duron [Harmon] do things.”

“I think for him it was even different than me because he came in undrafted and JJones has always been ‘hey man, put me wherever you want and that’s where I’m going to play.'”

“It’s a different view on things, but once you figure out the scheme of the defense you know when you’ve been playing corner, you know who’s behind you and where they are so you’re just switching roles and doing it from a different perspective,” Jones said about playing safety.

“I think that’s one of the things they preach when you get here. Don’t learn your position, learn the concept, learn the entire defense. Once you establish that, you know where everyone fits in. You know your responsibility, along with everyone else’s.”

Here, Jones is lined up on the strong side of the formation “capping” the slot receiver. Capping means the safety is lined up over the receiver behind another defender. In this case, the other defender is linebacker Jamie Collins in the Pats base defense. At the snap, Collins adds into the rush and Jones rotates down to play Collins’s hook zone replacing him in coverage. The rush gets to Fitzpatrick, and he’s forced to throw it away.

Jones is far from the only Patriots player that said learning the entire defense makes it easier to play in Bill Belichick’s system. Other players such as JC Jackson, Elandon Roberts and the McCourty’s also said similar things about how they’ve grown as players over the years.

The Patriots used Jones at safety for seven snaps against the Dolphins last week, and along with his role as the nickel or slot corner, he’s always in the center of the defense.

“He’s a guy that’s always in the middle at that nickel position, so he’s communicating with Steph [Gilmore], myself, JC [Jackson]. He handles a lot of stuff from that standpoint as well,” Jason McCourty said.

Playing in the middle of the defense also leads to responsibilities in the running game, especially as the top slot cornerback where Jones could have to fill on run gaps in certain situations. He had a run stop against the Dolphins last week.

“There’s some LB to it. Fitting gaps, fitting on the ball,” he told me. “Offense has various ways of getting DBs into the run game. They have different ways to get DBs to fit the ball. It’s part of the game, but more so at nickel.”

And on top of his success in the New England secondary, Jones is still a core special teamer with roles on kick coverage, punt coverage, punt return and field goal/extra-point block.

When you peel back the curtain, it makes all the sense in the world why the Patriots inked Jones to a three-year extension before the start of the season.

Like most Patriots, he’s versatile, plays both on defense and in the kicking game, and he’s got terrific coverage skills to play in a man coverage-heavy defense.

We all knew that the Patriots secondary ran deep, and they’ve been incredible to watch in the first two games with Jones in the center of it all.