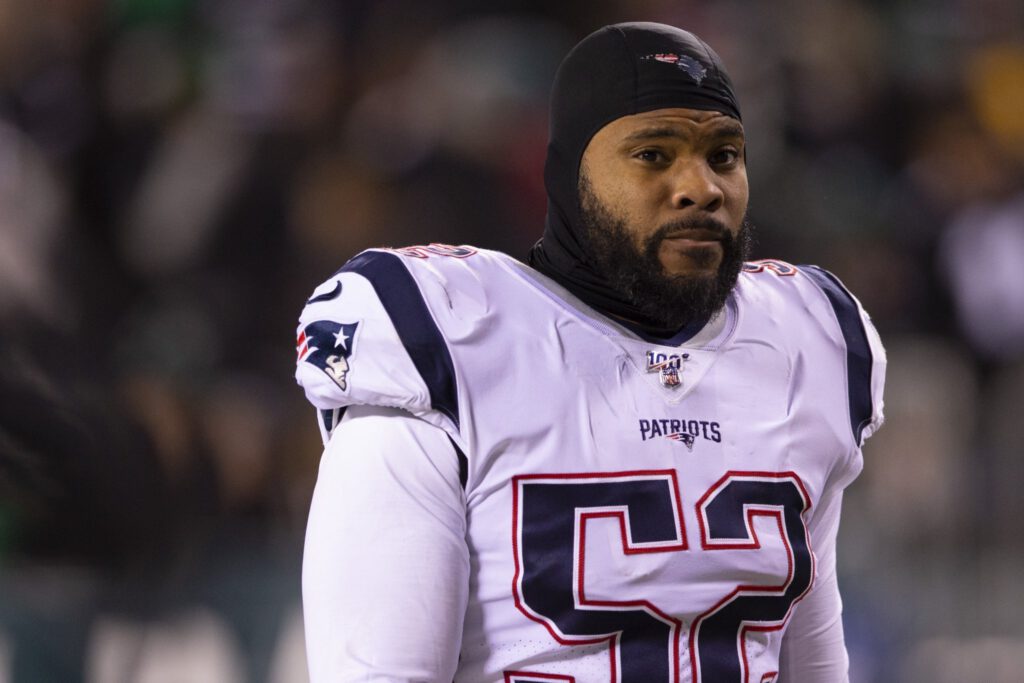 The Patriots under Bill Belichick have a history of players contributing in all three phases of the game, giving the best organization in the NFL ultimate roster flexibility.

Belichick himself brought up New England’s past experiences with defensive players on offense, saying, “we’ve done that before with other defensive players in similar situations. We used some guys at fullback like [Richard] Seymour, or a tight end like [Mike] Vrabel. So, there’s a variety of ways to get that done.”

The Patriots approached Roberts about filling a lead blocker role about a month ago, and the idea took hold after New England’s bye week.

The message to Roberts from the coaching staff was simple: take care of your role on defense first, but we need your help on offense. Now, Roberts plays in all three phases of the game, including special teams.

“It’s cool. Helping the offense out, whatever they need,” the Pats linebacker told CLNS Media.

“It was kind of like you know, of course, the injuries we had, and it’s going to be a challenge for you because you do have your linebacker role. You need to know your defensive stuff, but we need you to help on the offensive side too.

“It’s more studying, more stuff to your job, but this is a place that you have to do your job. I’m happy to help out my offense in any way.”

Although Roberts is willing to contribute, he has played 11 snaps at fullback over the last two games; the fourth-year Pro made it clear that his primary role remains on defense at linebacker.

During the week, Roberts practices in-full with the defense before he goes to work at fullback.

“They do a good job of getting us prepared for it, so it’s smooth once I get out there. If I have to adjust on the fly, I play process of elimination like I’m on defense. I kind of look at it from a defensive standpoint.”

Despite his willingness to take on the role, Roberts admitted that offense isn’t his cup of tea.

“I always liked defense, so I was never a guy that was like ‘I’m going to try out for running back or quarterback.’ None of that. Offense was never my thing.”

The last time Roberts played fullback in a game was in High School, and he didn’t love playing offense then either.

“I didn’t even like it then. I just did it because it was cool to do, but I really played linebacker,” he said.

Although Roberts is on his own on game day, Pro Bowl fullback James Develin is coaching him up at practice as a de facto coach along with starting center David Andrews.

“Great leader, great guy. I can ask him about anything,” Roberts said of Develin.

“Definitely a lot of respect for him. He’s one of the reasons I don’t have a problem with doing it because of the type of respect and the whole feel he brought to the position. So when I am out there, I try to make him proud. I know he wanted to be out there, of course.”

“When I am out there, he’s one of the people that it’s worth going out there and making the block, going through all this, because I know if he could be out there, he would be, so I’m going to make him proud.”

With the Patriots in a bind and the fullback position being a significant dimension to their offense, Roberts’s coaches are taking notice of his progress as a lead blocker.

“He had a big block in the Philadelphia game at the end of the game in the four-minute offense. That’s probably one of the best blocks we’ve had all year,” Belichick said.

Belichick also explained what the Pats saw in Roberts’s skill set that made them think he could be the answer at fullback after trying out several tight ends and offensive linemen on the roster.

“Elandon’s got a very physical style of play. He has a good skillset. He can run, he’s a very compact guy with good lower body strength and leverage and power, and I think we’ve all seen that on the defensive side of the ball and in the kicking game.”

Offensive coordinator Josh McDaniels added, “he made a few really important blocks that would have made James Develin very proud towards the end of the game there. We have a lot of confidence in him and that grouping.”

Discussing the big block on Jenkins in the Philadelphia game, Roberts’s competitiveness and physical presence that we see on the field showed in his responses.

“He stepped in the hole, that was my hole that I had to go through. Somebody had to go, and it wasn’t going to be me. That’s how I think about it,” Roberts said. “You step there, and you ain’t ready, that’s your fault because I’m going to be ready.”

And when you lump in his block at the end of the win over Dallas, Roberts said, “neither one of them wanted that, they didn’t want that pressure. That made my job easier.”

Although the Pats love their fullbacks, Roberts doesn’t see himself playing anywhere close to the number of snaps that Develin played in 2018.

But there are very few players in the league that can claim they play on offense, defense, and in the kicking game.

“Any more responsibility other than defense is cool with me, I’m going to attack it all the same way. I’m just trying to make sure at the end of the day, when I get on the field, that I’m able to make great plays on the defensive side, that’s my thing, and do the same thing in the kicking game and on offense.”

With players like Vrabel and Seymour, their contributions on the defensive side of the ball out-weigh anything they did for the Patriots offense, but that’s still apart of their legacies.

Roberts has a long way to go before he matches those two on defense, but he’s right there with them when it comes to his willingness and ability to play in multiple phases of the game.