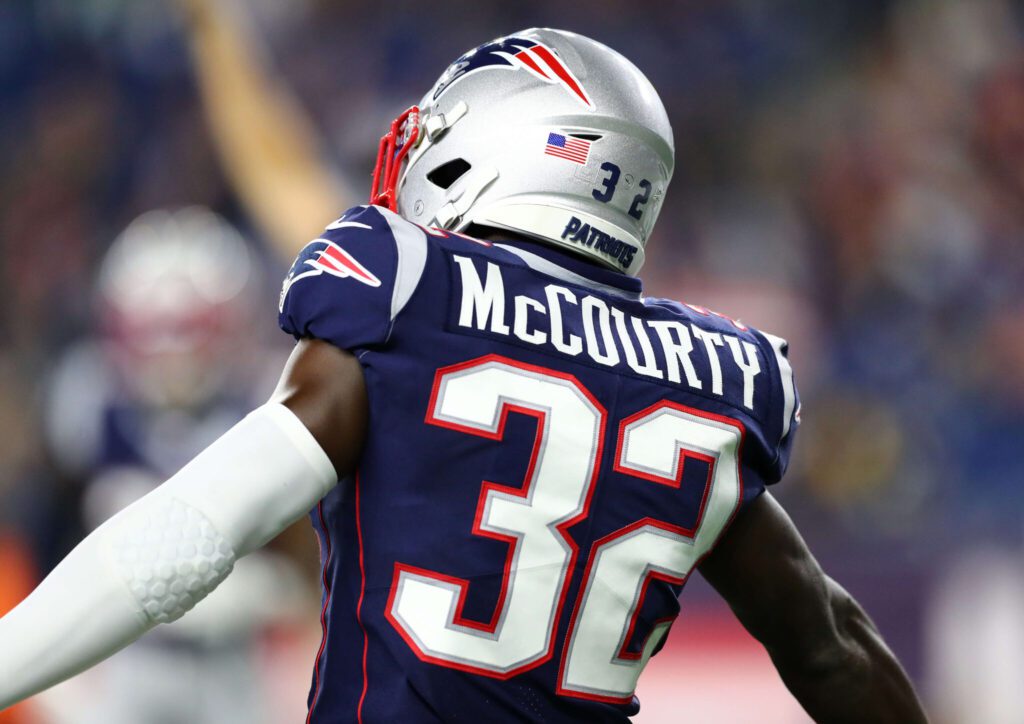 From 2015 to 2018, Patriots safety and defensive captain Devin McCourty had four interceptions, one in each season.

In the first four games this season, McCourty already has a league-leading four interceptions, tying a team record for the most consecutive games with a pick.

The Pats captain earned AFC Defensive Player of the Month honors, his first of his career, and the first time a New England defender won the award since 2013.

As Devin pointed out, the ball is finding him more this year than in seasons past, but his approach and positioning haven’t changed.

“For a lot of years, the ball didn’t find me a lot, You could be in good position, you could play good football, but the ball doesn’t find you,” he said. “Sometimes you go out there, and you know, Steph [Gilmore] tips one to me, I got an overthrow, I got another overthrow, and one where the quarterback never saw me. So, I wouldn’t say they’re like the hardest plays you ever make in your career. But sometimes you keep putting yourself in the right position, the ball will find you.”

“Me having interceptions shows how good this unit is. I’m able to play a lot of things just on being free and knowledge because our corners are so good. I don’t have to worry about anything. I have complete faith in what they’re doing.”

McCourty seems to be playing with a great blend of physical ability and experience. He agreed saying, “I feel like that. I doubt a lot of people think 32-year-olds are at a nice combination, but I feel pretty good, so I like how you put that. If you don’t mind, just keep telling the coaches that, too.”

McCourty does much more than intercept passes for Bill Belichick ranking second among safeties in Pro Football Focus grade so far this season (89.4 out of 100).

The Pats head coach summed up McCourty’s value to the defense in two phases: the instinctual brains of the backend and a great athlete that can go sideline-to-sideline.

“Devin has a lot of experience in our system, so he’s very well-versed in what we do, but he’s a smart player that understands the entire defensive concept, not just his position,” Belichick said on Friday.

“What everybody else does, what the strengths and weaknesses of the defense are, as kind of the last line of defense where to position himself to have the most impact on the play, to take away threats or to fill voids or space in the defense based on what we’re in, their personnel and their formation and so forth. Just instinctively, he does a lot of things right.”

Speaking to several Patriots defenders over the last two seasons, things start to click on another level for players when they learn the entire defensive concept, as Belichick mentioned.

Knowing what all 11 players are doing on one play allows them to understand how they fit into the larger picture and the leeway that they have to make plays.

For McCourty, he began learning the defense at a conceptual level once he moved to safety in his second season. As a rookie, he made the Pro Bowl as a corner.

“Once I moved to safety, that was something that I tried to really improve and learn,” he said.

“When I was at corner, I knew a little bit of where the safety is going to be, and I knew where the outside linebacker would be every once and a while when it relates to me. But other than that, I didn’t care what anybody else was going to do. When I moved to safety, I gained a different appreciation for the defense as a whole.”

“It’s huge, but it takes time. My rookie year, I wasn’t here trying to learn what all 11 guys did; it was too hard. It was hard enough knowing what you had to do. But I think the more you play in a system and especially some of our positions middle linebackers, safeties, quarterbacks it definitely helps you as a player to understand where guys are going to be, especially when you have to communicate a lot of things.”

McCourty’s knowledge of both opposing offenses and the Patriots defense allow him to put his teammates in the right position to defend passes.

“He’s pretty much like our Tom Brady back there,” first-year Patriots safety Terrence Brooks told me. “He gets us lined up, he sees stuff that other guys don’t see, and he’s pretty much our safety net back there.”

“He knows our defense probably the best besides maybe the linebackers like [Dont’a] Hightower and those guys. He knows what’s going on so he can anticipate things,” Patrick Chung said.

“He does a lot. He makes checks. We talk about plays before they happen. It’s just all of us trying to play fast and eliminating what the offense is trying to do,” added All-Pro cornerback Stephon Gilmore.

Along with ball-hawking and being the quarterback of the defense, the ten-year NFL veteran provides comfort for his teammates as the last line of defense in the Patriots secondary.

One of those teammates for the last two seasons is twin brother, Jason. Jason says Devin makes his life easier on the field by having his back on game day.

“Him and Duron [Harmon], they think like corners out there. When we are sitting there watching our film, whether it’s practice or games, they understand how offenses want to attack and how quarterbacks think,” he told me.

“For us as corners, it’s a sigh of relief, just watching them back there. Whether the formation dictates something or ‘I’m going to lean here because that’s where he’s most likely to go with the deep ball,’ we talk about it throughout the week. As a corner, you’re very comfortable knowing those guys have your back.”

And as you’d expect, Jason also had a proud brother moment talking with me about Devin in the Patriots locker room on Thursday.

“For me, it’s been special to sit there and watch him up close rather than from afar seeing social media posts of him giving a speech or whatever the case may be. Watching the way he leads, being here and seeing it on a day in and day out basis. It’s awesome as a brother to watch him get the pub and notoriety he deserves.”

So far, his 2019 season is slightly below those years in terms of overall grade. But he’s off to the best start to a season of his career.

Although the interception totals are gaudy, his teammates aren’t surprised by his production and see him in the same spots on the field as years past. As he said, the ball is finding him.

“No, this year is no different than last year, and I don’t think it’s any different than the year before. The ball is just finding him right now. He trained with the same guy in the offseason, everything’s been the same,” Jason said with a smile.

After he retires from the NFL, McCourty will eventually get the call for his red jacket as a member of the Patriots Hall of Fame. And with a few more seasons like this, who knows, maybe Canton.

Belichick summed him up a smart, tough player that works hard and helps the team win.