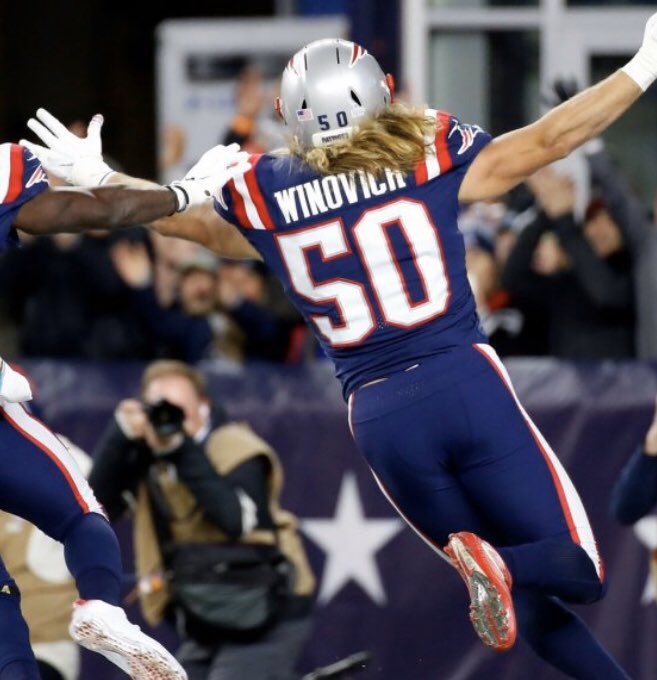 The Patriots selected ten players in the 2019 NFL Draft, and things are off to a slow start for most of the rookie class.

First-round pick N’Keal Harry missed half the season due to injury and only has five receptions to date, second-round pick Joejuan Williams is buried on the depth chart, and others are essentially redshirting all together (Damien Harris, Yodny Cajuste).

However, along with punter Jake Bailey, third-round pick Chase Winovich represents a silver-lining in what has been an underwhelming first season for the 2019 class.

Winovich has played in nearly 30 percent of New England’s defensive snaps, where he has logged 5.5 sacks, 20 quarterback pressures, and ten run stops in his first year.

He also plays on over half of New England’s special teams snaps, returning a blocked punt for a touchdown earlier this year, and has the second-best grade among rookie edge defenders behind only San Francisco’s Nick Bosa, per Pro Football Focus.

Holding down a role in Bill Belichick’s defense as a rookie is no easy feat, and as he transitions to the NFL, the Pats rookie is learning that consistency trumps all in this league.

“The biggest thing, for me at least, was that it was definitely a catalyst for making myself be my best and that in itself is hard,” Winovich told CLNS Media.

“I always thought I worked hard, I think I do work hard, but then you get here, and it’s a locker room full of guys that are very similar in that mindset, that buy into the program. It makes you always perform at your best and be on your toes.”

Winovich also talked about the human side of going from the college game to the draft to now a professional football player with expectations and added pressure.

“You have to attack it from an emotional perspective, too, because you’re coming from college where everyone hypes you up and the whole draft process,” he said. “Then you come here, and you’re a rookie and your back at the bottom of the totem pole. The Patriots are a very earn your keep organization, and it’s just the Patriot Way.”

Belichick has liked what he has seen so far from Winovich in his first 13 NFL games, likening his versatility to veteran teammates Dont’a Hightower and Jamie Collins.

“Well, I think you saw that from [Dont’a] Hightower and [Jamie] Collins when they were younger,” Belichick said. “Chase has done multiple things for us. He’s a smart kid and he’s got a good skillset. He can run, he’s got good power and strength, he’s got a good motor. He’s done a nice job for us in the kicking game. He’s played the run well, has pass-rushed well and he’s pursued and made plays down the line of scrimmage, as well. So, glad we have Chase.”

“His role has been multiple and he’s been able to mentally do a good job with it, and not just know his assignments, but also play instinctively and with good communication with the defense because there are some adjustments and so forth that we need to make within that interior group, and he’s picked those up pretty well.”

On the field, the biggest transition for Winovich has been, along with learning an entirely new defense, adjusting to a standup outside linebacker role.

At Michigan, Winovich played almost exclusively in a three-point stance with his hand in the dirt as a defensive end in Don Brown’s defense.

With the Patriots, Wino is still at the end of the line, but he’s on his feet, which comes with new responsibilities and a different vantage point. Now, he could be responsible for a running back coming out of the backfield on a pass route or a tight end or slot receiver coming into his area.

“Chase’s role is definitely different than what it was at Michigan. I mean, there are some similarities – he predominantly plays on the end of the line – but, Chase has done multiple things for us,” Belichick explained.

To help with that learning process, Winovich works closely with outside linebackers coach Demarcus Covington and pass-rush guru Joe Kim, who he works with every morning.

“Coach Covington has been extremely patient with me and extremely attentive, just like attention to detail and trying to work through different techniques,” he said of his position coach.

On Kim, the Pats rookie said, “Coach Kim, every morning, I’m always volunteering my time to get better as a pass rusher, and wherever he can help me, he’s more than willing to do that.”

Along with extra work with coaches, Winovich, dating back to joint practices with the Lions and Titans during training camp, takes notes on all the offensive tackles he goes up against each week.

“I take notes after the game. I try to jot a couple of things down because I anticipate that I’m going to play these guys again,” he said. “As you go through the process, you get a feel for which moves are going to work on which people. You kind of have an anticipation, but you never really know until you get out there, and that’s part of the challenge.”

“You have to be able to play fast when you get out there because I already know for the most part that I’m not going to have a thousand plays to get it right. If I go out there and I’m not doing well, who knows how long my leash is really for that.”

Winovich’s majestic blonde hair or energizer bunny-like motor stand out, but behind the scenes, we sometimes get a glimpse of a budding bromance with another famous Michigan alumn.

Dating back to the summer when Tom Brady would have Winovich wack him with padded blocking equipment to simulate the pass rush, the 42-year-old quarterback took a liking to the 24-year-old rookie.

And for a starstruck Winovich, he has now seen first hand what he called one of the best humans he has ever been around and an example of a true leader.

“I think it’s because I’m handsome, but I’m not sure,” Winovich joked of Brady’s fondness for him.

“At the end of the day, he really lives up to the hype and more,” he continued. “Coming in, it’s one of those things where you are definitely a little starstruck because as a rookie and he’s the man.

“He’s one of the greatest humans I’ve ever met, I think, and I really look up to him. I’m very thankful to have someone like that as a teammate, someone I can learn from, and he sets a great example for the young guys.”

“Sometimes, not so much here, I’ve seen examples around the league of people that have success and all this notoriety, and there are not many examples of sports of true leaders. In my eyes, he’s one of them.”

Winovich explained that although he’ll pick Brady’s brain on football from time to time, that their friendship is more about life than football.

“Our relationship isn’t so much in the film room per se, but I’m not hesitant to pick his mind on stuff.”

Winovich respectfully declined comment when asked about the state of Michigan football.

Those that follow him might have also noticed that Winovich’s hair mysteriously became an even lighter shade of blonde about a month ago. To that, he said, “that’s a secret, can’t tell you that.”

Many observers of the team would say that the first year for the 2019 rookie class isn’t going as planned for the Patriots, but they found something in the first of three third-rounders.